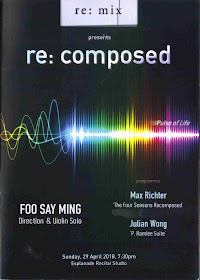 This review was published in The Straits Times on 1 May 2018 with the title "Sumptuous tribute to P.Ramlee".

After a hiatus of one year, the crack string ensemble re:mix led by violinist Foo Say Ming returned with a vengeance, doing what it does best: delivering nostalgia by the earful and more. Its 80-minute-long concert served up familiar music but dressed up in new garb, such that well-loved originals are viewed through lenses of many different tints.

German-British composer Max Richter found himself a hit in 2012 with The Four Seasons Recomposed, essentially Antonio Vivaldi's four most popular violin concertos brought up to speed through a quasi-minimalist update. 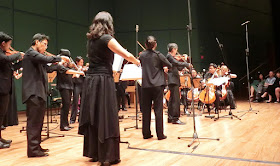 Without issues of copyright to worry about, all the original movements were reprised in sequence but modified by highlighting certain themes while downplaying or excising others, altering harmonies and chord progressions, switching rhythms and even throwing in a new tune or two. How Borodin's “Stranger in Paradise” melody from Prince Igor sneaked into the 3rd movement of Spring seemed a mystery. 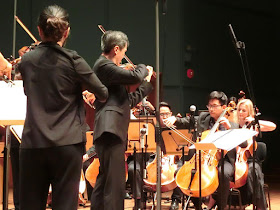 Foo was in his element for the virtuosic solo part, which he commanded with consummate ease alongside leading his players, which included a harpsichordist and harpist for good measure. The sound they produced was sumptuous for a relatively small group. Its core members have been together for 12 years, and that definitely has something to do with it.

Winter threw up some surprises. Its slow movement dispensed with the rhythmic accompaniment of falling snowflakes and a crackling fireplace, instead Foo's solo was backed by string harmonics, which was bleakly ethereal. And the hypnotic minimalist last movement gave the feeling of “the end of times”, a definitive sense of finality. 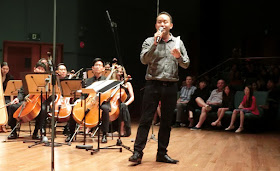 Arguably better was the world premiere of young local composer Julian Wong's P.Ramlee Suite, which relived nine of the Penang-born musical icon's favourite songs in three movements. The titular suite seemed almost modest by name, as it was more like a 20-minute symphony given its classical form and architecture. It was also dedicated to Wong's composition teacher Iskandar Ismail, who like Ramlee, departed way before his time.

Wong gave a most eloquent preamble, providing short sung passages in Malay which were totally idiomatic and engaging. The music that followed was no less enthralling, string sonorities multiplied manifold for spine-tingling effect, joined by percussionist Riduan Zalani with some authentic Malay drumming. The 1st movement was a concertante showpiece for Foo, quoting songs like Azizah and Jangan Tinggal Daku, while turning Malam Bulan Dipagar Bintang into a Viennese waltz. Erich Korngold's Violin Concerto, which used his Hollywood movie tunes, came to mind. The slow movement luxuriated in Ramlee's most popular song bar none, Getaran Jiwa. With no solo to helm, Foo used both his bow and violin to direct, circumscribing wide arcs in the air. The finale, which relived Anak-ku Sazali, Senandung Malam and three other songs was in rondo form and even included a short fugue. Climaxing with a virtuosic cadenza, a standing ovation greeted the work's close. No surprises what the encore was to be: Getaran Jiwa, milked to the very last tear-drop. 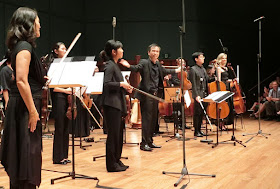 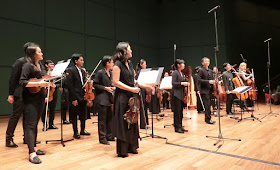