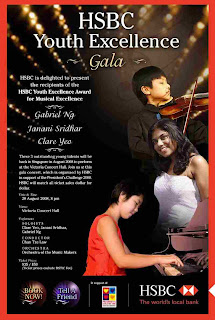 Witnessing the birth throes of a new orchestra is one of the most exciting phenomena for music lovers. The Orchestra of the Music Makers, formed by alumni of various youth and school orchestras in Singapore and led by conductor Chan Tze Law, made the best possible start.

The primary function of its debut was to partner three past recipients of the HSBC Youth Excellence Awards, but it had many minutes of its own to bask in the spotlight. An unanimity of purpose distinguished Dvorak’s rousing Carnival Overture which, despite some roughness around the edges, provided the evening with a high-octane start.

Combining the virtuous with the coquettish, and a change of evening gowns in between, there was further room to develop a set of lungs and cords that could transcend the orchestra and fill the hall. Her encore, the Laughing Song from Johann Strauss’ Die Fledermaus, sparkled like champagne.

Singapore’s youngest ever student in New York’s Juilliard School, Clare Yeo, was next. Her reading of Gershwin’s Rhapsody In Blue tended to be on the staid side, despite clarinetist Vincent Goh’s best efforts to sound sexy in his opening solo. There was, however, much thought to shape phrases creatively, and with utmost musicality. The coruscating cadenza was also whipped off with great confidence.

Yehudi Menuhin School resident Gabriel Ng seems like the most natural virtuoso of the trio. His effortless take on the first movement of Paganini’s Violin Concerto No.1 has to be heard to be believed.

Allying close to spotless intonation with a fearless disregard for the work’s myriad technical challenges, his showing was the one to marvel at. His encore, Kreisler’s Recitative And Scherzo, was further assurance of his abilities.

All three joined the orchestra for the closing number, the Mexican Arturo Marquez’s Danzon No.2, recently made famous by the Simon Bolivar Youth Orchestra. The instrumental prowess and infectious zeal transmitted by all on stage was much cause to rejoice in.

Who really needs to journey to Venezuela when there resides a world’s local bank of prodigious musical talent on our very doorstep?
Posted by Chang Tou Liang at 14:42