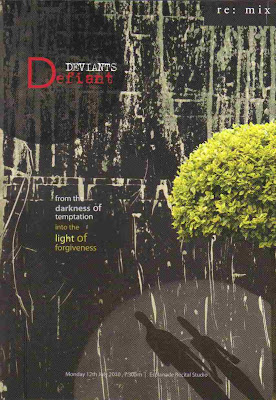 This review was published in The Straits Times on 14 July 2010.

According to its bio, the crack local all-strings chamber outfit re:mix “makes no demarcation between classical music and popular culture”. Its latest concert brought this credo to a new extreme by coupling 1970s Taiwanese film music with that of Viennese modernist Arnold Schoenberg.

Piqued by this seeming mix of chalk and cheese? Do not be, as sexual sublimation and psychological upheaval unite the storylines of both works, acknowledged to be classics in their own fields.

The former was arranged by locally-based young composer Chen Zhangyi in a form of a three movement suite, which treaded fine lines between kitsch, pastiche and high art. This was perhaps deliberate, with bass solo and grouped cellos opening with Walking In The Rain in a manner of Villa-Lobos’ Bachianas Brasileiras.

Over pizzicato strings, leader Foo Say Ming’s (left) solo violin glided stylishly and silkily in the engaging Olive Tree. In the final movement, Your Smiling Face, the Preludium from Bach’s Violin Partita No.3 was slyly woven into the counterpoint, while strings sang out Mantovani-like in a curtain of svelte sonority.

Schoenberg’s notorious string sextet of 1899, performed in its 1917 arrangement for string orchestra, presented re:mix one of its biggest challenges to date. The mystery-shrouded beginning sounded prosaic and tentative, but this gradually blossomed into a fulsome bloom that soon enveloped the recital studio.

The pacing of this 30-minute long programme-dictated work was no easy task, but re:mix generated genuine tension through its roller-coaster journey of overwrought emotions and final catharsis. The tonally ambiguous idiom, clearly inspired by Wagner’s Tristan und Isolde, heightened the already volatile atmosphere of uncertainty.

Dehmel’s text, translated into English, was projected onto a screen for the audience’s benefit, but that was superfluous and distracting. William Ledbetter’s preamble about the virtue of forgiveness (and nothing about deviants being defiant, yet another eye-catching but supercilious title) was brief but helpful. Sometimes, it is best to allow music to speak for itself. The performances by re:mix were surely good enough for that.