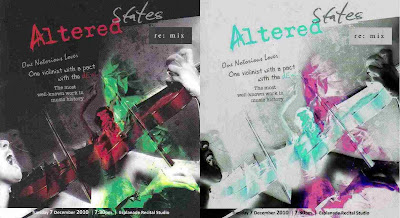 One thing is certain in concerts by the chamber group re:mix, that is to expect the unexpected. “What will they think of next?” is a recurring mantra, as pre-conceptions are inevitably shattered. The latest gig by re:mix was its most outrageous yet. 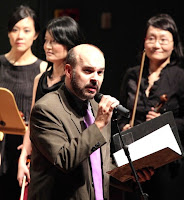 Yet it began almost conventionally. Actor William Ledbetter (left), now an unlikely force in music education, opened by extolling the anarchic virtues of re:mix, its originality and creativity. Then came a complete performance of Mozart’s Don Giovanni Overture, led by director Foo Say Ming clutching on his violin, played straight.

Ledbetter was scandalised. “How dare they perform anything as it was written?” he implied. Indeed this unscheduled stop was a first time the group had performed a standard overture. But its real purpose was to introduce Michael Nyman’s In Re Don Giovanni, a short minimalist piece based on a shorter fragment from the Catalogue Aria. “That’s more like it!” Ledbetter seemed chuffed. 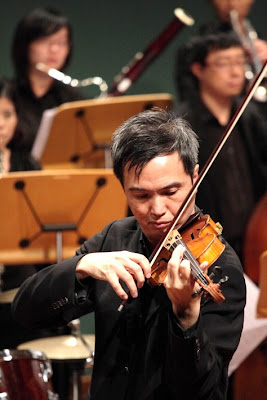 Next stop was Paganini, that devilish and stooped violinist with spindly contorted fingers. His First Violin Concerto in D major (Op.6) is familiar enough, but not the Viennese coffee house version brewed by Fritz Kreisler. This was music from the first movement but dressed up in a ball gown, and smothered with marzipan and Schlagobers (whipped cream).

The score included a harp (with no less than SSO principal Gulya Mashurova), florid flute counter-melodies and mutated orchestral parts. Soloist Foo performed this musical bride of Frankenstein like Igor might have, somewhat tipsy but no one minded. This curious piece of kitsch was vulgar in the extreme, perhaps deliberately so.

Frankenstein’s monster himself surfaced for the final piece, Samba No.5! by Cultural Medallion recipient Iskandar Ismail, a transmogrification of the first movement from Beethoven’s Fifth Symphony. Ledbetter first primed his audience into going Da-da-da-dum and then the beat started. Central to the ensemble was drummer Tama Goh and two percussionists who manned the bongos, congas and tambourine. 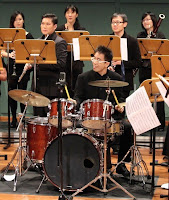 Snatches and swathes of original Beethoven were grafted upon Iskandar’s highly rhythmic score, culminating in a cadenza ad libitum by the tambourine virtuoso, with orchestral players swaying on the sidelines. It was rough and ready from start to end, but there was no denying the energy and vitality of the whole enterprise.

re:mix had done it again; again what will they think of next? 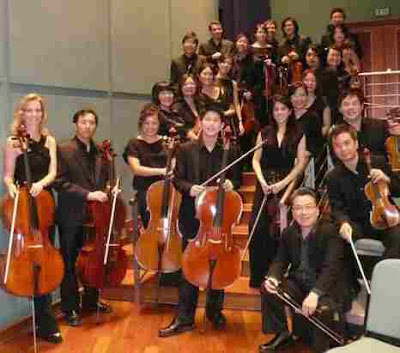 Concert photographs courtesy of Vincent Wang (the better ones) and Tama Goh (the rest).
Posted by Chang Tou Liang at 10:16