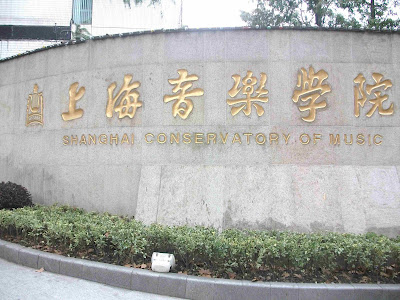 Here we go again. The second session of the quarter-finals was opened by ABDIEL VASQUEZ (), with Beethoven’s E major Sonata Op.109. It is a very musical account, fluid in the statement of themes, and well contrasted with the Prestissimo’s strong and emphatic accents. The chorale melody in final Theme and Variations was well stated, and the variations unfolded deliberately but there was a sense of direction where the music was going. Overall it was a very competent reading, with little to separate him from the Swiss girl Wiederkehr’s earlier performance. 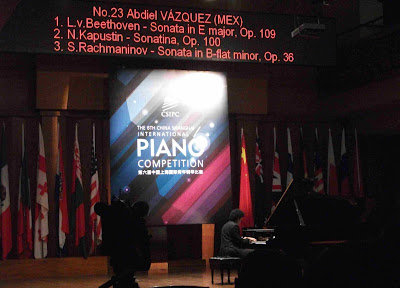 Vasquez certainly has a sense of humour by adding Nikolai Kapustin’s quaint little single-movement Sonatina Op.100 between the two main works, as if to mock the exclusion of Beethoven’s “little sonatas”. Performed with such zest and cognizance of the jazz idiom, it is a wonder why not many pianists adopt it as a matter of programming variety. He signed off with Rachmaninov’s Second Sonata in the shorter 1931 version. It is a solid performance, smouldering in intent and full of the bell sounds the Russian composer so loved. In the second movement, he attempted to bring out inner melodies, perhaps trying a little too hard when others just play it straight. The coruscating finale has a few missed notes, but that mattered little in this thunderous reading which had a mastery of sonority. 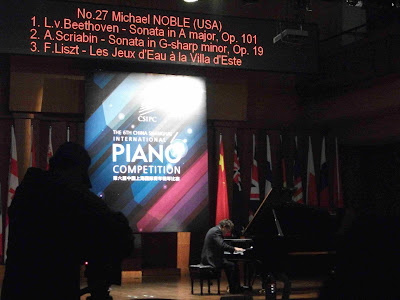 MICHAEL NOBLE () played next, and he must have had a bad day in the office. Despite an obvious sympathy for the music selected, which he displayed in fits and starts, mistakes and memory lapses plagued his accounts of Liszt’s Les jeux d’eau a la Villa d’Este, Scriabin’s Second Sonata and Beethoven’s A major Sonata Op.101. He appears to be the weakest of the 12 quarter-finalists. 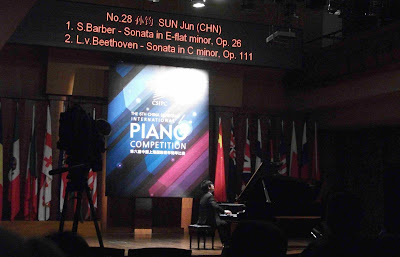 After him, SUN JUN () stood out with a most confident performance of Beethoven’s final Sonata in C minor (Op.111). To say that he is technically superior with an immaculacy of note perfection would be an understatement. The stridency of the first movement, its gravity and high tragedy was captured with an unapologetic aplomb. He seems to fully understand and project Beethoven’s pain and angst as an extension of his own musical soul. The spirituality of the Arietta was plain for all to see (and hear), and the variations proceeded with a magisterial magnificence, slow at first encounter but patience was rewarded with the syncopated “jazz” variation that leapt out of the pages with pure unadulterated joy. If Beethoven was credited to have invented jazz here, he might also be responsible for inventing “tintinnabulation” in the subsequent variations, where Sun’s even and refined trills filled the air with resplendence.

After this spiritual journey, Sun took a longer than usual break before embarking on Samuel Barber’s Sonata Op.26, one of the great piano works of the 20th century. Its dissonance and seemingly atonal opening gambit seemed to echo the Beethoven, but the apparent spikiness belied a lyricism which the performance mined with great purpose. This was to be found in the mercurial Scherzo, a manic little waltz, and the funereal slow movement with its wails of anguish. The finale’s fugue revealed no nerves from this young man, who steady like a ship, negotiated its treacherous course not with grim-faced determination, but with humour and warmth. A semi-final place beckons. 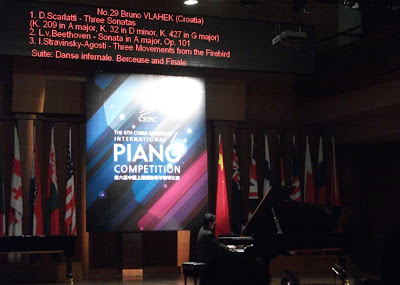 Credit BRUNO VLAHEK () for selecting three contrasting Scarlatti Sonatas to begin, all of which provide ample display of his technical prowess; crispness in A major (K.209), pathos and tragedy in D minor (K.32) with small variations in the repeats, and prestidigitation in G major (K.427). If Scarlatti had written “Vive felice” or “Live well!” to precede these studies, he probably had these performances in mind. The A major Sonata (Op.101) of Beethoven has become the quarter-finals’ most performed work (no less than three readings this afternoon), little wonder as it gives the pianist the greatest scope for expression. Vlahek’s view is up there with the best, displaying a wide range of emotions, with the palpable sadness of the third movement giving way to a nostalgic relook of the first movement’s opening. The bravura of the final fugue was merely a prelude to his closing work, the Guido Agosti transcription of movements from Stravinsky’s Firebird.

King Kaschei’s Danse Infernale erupted with massive A minor octaves, as momentous an opening to compare with Stravinsky’s own Three Movements from Petrushka. I imagine this transcription to be even more virtuosic than Stravinsky could muster himself, and Vlahek’s performance more than held up to scrutiny. Even if one misses the orchestral colours, there was no lack of pace and momentum to drive the music towards it intoxicated end. The quiet Berceuse stood out with its beautiful harmonies, while the Finale provided yet another blaze of decibels. Another good semi-final bet. 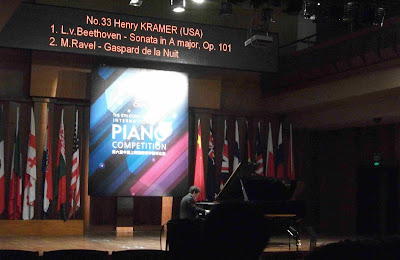 We’re getting to the business end of the quarter-finals, and the quality seems to be rising as well. I have never heard of HENRY KRAMER () prior to this competition but he appears to be the one to beat. Of the four performances of Beethoven’s A major Sonata (op.101), his has to be the most complete in terms of conception, technique and aural beauty. He produced a most exceptionally rich sound, big-boned in certain respects yet intimate when it mattered. He traversed the music’s wide-ranging emotions with great sensitivity, wistful for the opening theme and sombre in the third movement, and when the gloves came off for the second movement’s march and the valedictory finale, he swept everything before him.

Ravel’s Gaspard de la nuit also received a close to perfect performance. His silky tremolos in Ondine was achieved with an enviable evenness - pianissimo throughout – before building up to a tumultuous tsunami of a climax. The droll tolling of the bell in Le gibet was haunting and hypnotic, casting a spell which soon dissipated with the appearance of Scarbo. Here the full dynamic range of Kramer’s armamentarium was unleashed with a vengeance, as the shrieks of the diabolical goblin leapt memorably into consciousness. His repeated note technique was superb, and the way he launched into the coruscating climaxes was breathtaking. Kramer, who resembles a young Barenboim, looks and sounds like a potential winner. 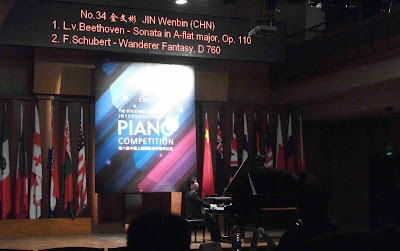 Not to be underestimated was the twelfth and final quarter-finalist JIN WENBIN (), who frankly does not even look a pianist. Yet when his fingers caressed the opening chords of Beethoven’s A flat major Sonata (Op.110), the refined and intimate sound stood him out to be someone special. The sequences of arpeggios that followed, often rendered mechanically in lesser hands, seemed to weave a web of fantasy. This was a performance hard to dislike, with not a trite note to be heard. Everything was played with purpose, integrity and above all, an over-arching beauty. The third movement moved from the greyness of melancholy in the arietta to the distant but looming light of the fugue, which had the clarity of crystal. He truly knows the meaning of crescendo, generating a pipe organ-like sonority in the grandstanding close. The last time I heard anything like this was in the magnificence of a certain Arcadi Volodos.

The last music of the quarter-finals was Schubert’s Wanderer Fantasy, often the graveyard of many an over-ambitious pianist. Here, Jin was solid as a rock, the opening chords delivered emphatically and with great confidence. Nothing seems to faze this young man. The desolation of the Wanderer theme in the second movement was well captured, as were the ensuing variations which were colourfully rendered. The right hand’s filigree came across most vividly in his prodigious fingers. Even the treacherous third movement was handled with grace, with none of the banging which the music seems to invite. His reserves were finally summoned for the mighty final fugue, where the notes began to pile up until one is totally overwhelmed. No fears for Jin, whose tour de force of control won the day. This may be Schubert’s most virtuosic showpiece, but Jin made it sound like a piece of true artistry.

My verdict: There should at least be four Chinese pianists who will make the semi-finals. They are, in my humble opinion, HAO YILEI, ZHU WANCHEN, SUN JUN and JIN WENBIN (and possibly LIU YILIN). In their company should also be BRUNO VLAHEK and HENRY KRAMER (and possibly ABDIEL VASQEZ).

My heart goes out to the eliminated SUN JUN, who was wonderful in Beethoven Op.111 and Barber. Commiserations also go to ABDIEL VASQUEZ whose nice trick was to insert the encore-like Kapustin Sonatina between the titans of Beethoven Op.101 and Rachmaninov Op.36. They did not put a foot wrong, except being in the company of other exceptional musical talents.
Posted by Chang Tou Liang at 08:00