OUT OF THIS WORLD / Anderson and Roe Piano Duo / Review 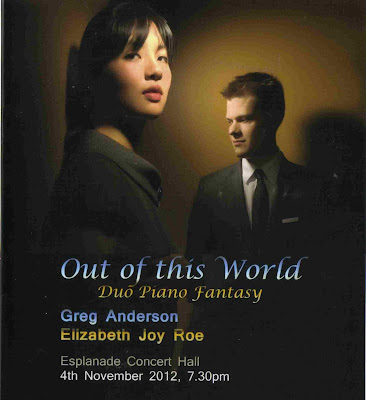 
This review was published in The Straits Times on 6 November 2012 with the title "Flying on two pianos".

A curious but true fact: there has never been a piano duo concert at Esplanade Concert Hall until this evening. The honour of being the first went to the American duo of Greg Anderson and Elizabeth Joy Roe, or the legal-sounding Anderson & Roe for short. And there is unlikely to be one to make quite the same impact, that is, unless they come back again.

Make no mistake, this was still a classical concert, but one touched with pop sensibilities, and updated to meet 21st century tastes. If they are renowned, that is because they belong to the YouTube and Facebook generation, boosted by music videos that are slickly produced with soft focus camera-work and high-definition sound. In real life, they are a class act and totally likeable too. 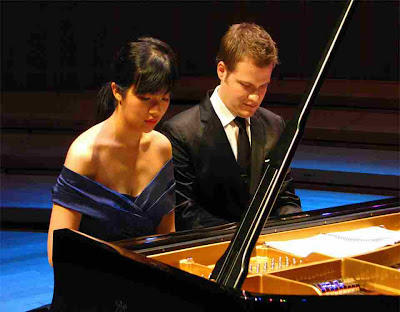 Music for two pianos is thin on the ground, so their own arrangements fill a much-needed niche. The music that opened the two-hour concert was Saint-Saëns’s Danse Macabre, in an expansion and elaboration of Franz Liszt’s famous transcription for two hands. Playing completely from memory, their ensemble work on two Steinway Ds was breath-taking for pinpoint accuracy, rapid-fire synchronisation as well as stylishness of execution.

In quieter numbers, such as Bach’s Erbarme Dich (St Matthew Passion) or Villa-Lobos’s Aria (Bachianas Brasileiras No.5), fancy filigree work never got in the way of melodic inspiration. In their versions, one hardly missed the soprano voice, oboe or cellos of the originals. 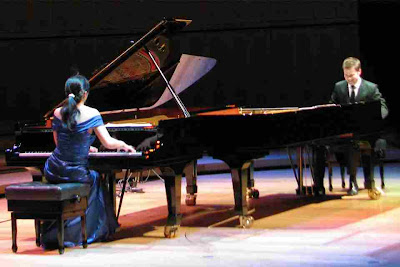 When they converged onto a single keyboard, things began to get even more interesting. In Stravinsky’s The Rite of Spring, the only work in its original form, it became a game of staking one’s turf, jostling for space and preventing collisions, all this being captured on a large screen behind the stage. In Piazzolla’s Libertango, they came within kissing proximity, their eyes met, and the frenetic music told the rest of the story.

After the interval, their Mozart-inspired suite of Papageno! (a fantasy on the bird-catcher’s themes from The Magic Flute), Soave sia il vento (Cosi fan tutte) and Ragtime Alla Turca provided a smorgasbord of different styles. The latter was, of course, a jazzed up version of the Turkish Rondo in the manner of meets Volodos. 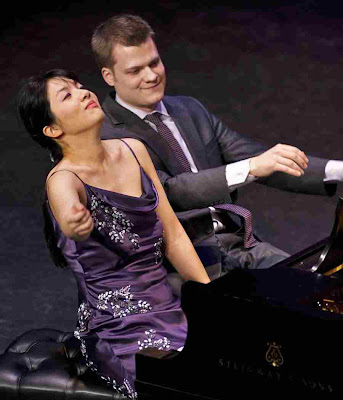 Rachmaninov’s melancholic Vocalise built from a simple wordless chant to a shuddering climax of barely-contained grief, with decorative figurations the late Earl Wild would have been proud of. The Anderson & Roe signature piece, Carmen Fantasy closed the concert on a high-octane and high decibel spell.

There were four encores, which included Michael Jackson’s Billie Jean, Khachaturian’s earthy Sabre Dance before blasting off into orbit and the astral nocturne of the Force Theme from John Williams’s Star Wars. By the end of the fourth, the high spirits of the audience had more than taken flight, and was already out of this world.