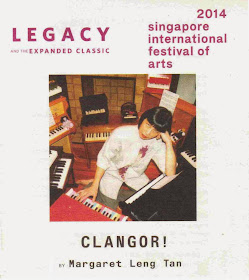 This review was published in The Straits Times on 18 August 2014 with the title "More than just a toy piano".

From the legendary Singaporean artist Margaret Leng Tan, one should only expect the unexpected. The Juilliard-trained classical pianist (one remembers her in a Mozart piano concerto with the Singapore Symphony in 1981) has over the decades styled herself as the “high priestess of the avant-garde” (John Cage’s silent 4”33” being a speciality) and now the “queen of the toy piano”.

She has this field to her own, and how she commands it. The second recital at the Singapore International Festival of the Arts (SIFAS) was a free and non-ticketed event, devoted wholly to music for the toy piano. Almost single-handedly she has turned child’s play into a serious art form, and here were the fruits of her labour.

The hour-long event opened as a one-woman procession with toy cymbals, making her way to the stage like an Energiser bunny in John Kennedy’s Fanfare from The Winged Energy of Delight. Then she settled in front of her upright Schoenhut toy piano, accessorised with other implements that were “blu-tacked” on its top.

The first piece was young Taiwanese composer Ying-an Lin’s Drunkard’s Dance (2013) which was played on both keyboard and a coffee tin, hit and stroked with a metal stick. A perceptibly Chinese melody was heard before the work abruptly ended with the tin sent hurtling off-stage. According to Tan, a tin of hazelnut cream produced a different and desired timbre from the usual coffee.

Fellow toy-pianist Phyllis Chen’s Carousel (2009) and Cobwebbed Carousel (2010) was a hypnotically beautiful diptych. These were produced by an accompanying hand-cranked music box which played a perforated paper roll, and later inverted to produce a different sequence of notes for the second piece. Simple yet beguilingly effective.

James Joslin’s Für Enola (2011) involved a jack-in-a-box wound until it popped at a crucial moment, and a spinning top that ran its course before falling off the piano. David Wolfson’s Twinkle, Dammit! (2011) with its undertones of violence was a tribute to the trauma of childhood piano lessons – repetitive scales, rapped knuckles (with a toy hammer) and obsessive quotes of Ah vous dirai-je Maman. Here was an imagined piano lesson with Chucky, no less. 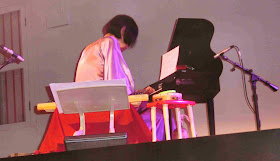 Monica Pearce’s Clangor (2013) was a lament that juxtaposed the sound of three bicycle bells, each struck and trilled in different tones. Mexican Jorge Torres Saenz’s Toy Symphony (2013) in five short movements brought in almost everything save the kitchen sink. The Night Music movement was a tribute to Bartok, with rustles, tweeting crickets and bird whistle, while the finale Leng Tan Toyccatina was a virtuosic etude to end all etudes.

The final work saw Tan at her most theatrical with Jed Distler’s Minute Ring (2006), a parody on Wagner’s 15-hour, four-night Ring cycle, reduced to just a minute long. She donned a horned Valkyrie helmet, crunched out the major leitmotifs of the operas, culminating with Siegfried’s moment of shock when he encounters the supine Brunnhilde with the exclamation “Das ist kein Mann!” (This is not a man!). Tan’s return to next year’s Festival with a major new work will be keenly anticipated. 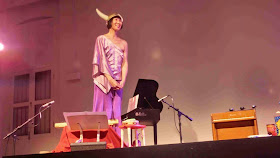