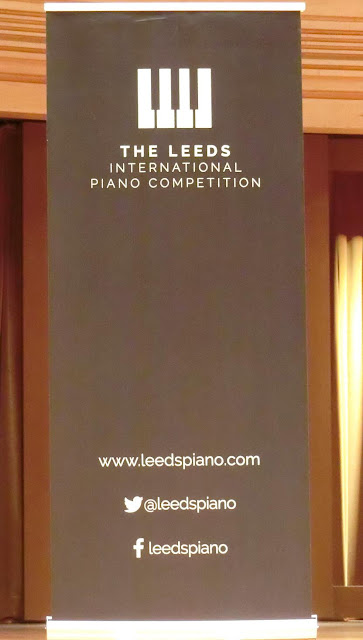 Eleven young pianists performed at the Singapore leg of the First Round in the 2018 Leeds International Piano Competition. 40 artists had already been accounted for in Berlin, while another 17 will be heard later in New York City. A large audience had turned out, and thankfully none of those pesky, noisy and irritating toddlers who threatened to derail the Singapore International Violin Competition held earlier this year were admitted. 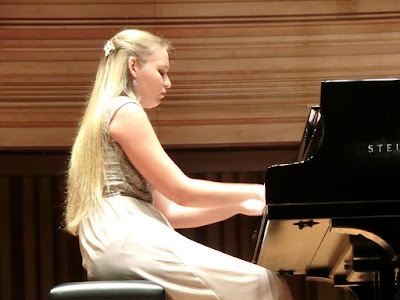 Six pianists played in the afternoon beginning with KSENIIA VOKHMIANINA (Ukraine) who has become very much part of the Singapore music scene having lived and studied here for quite many years. Despite being the first to perform, she displayed little or no nerves in an interestingly varied programme of Scarlatti and Rachmaninov. The quiet desolation of the Sonata in D minor (K.213) was sculpted with a crystalline clarity, then contrasted with the toccata-like A major Sonata (K.39), the staccatos dispatched with razor-sharp articulation.

The lush romanticism and wide dynamics of Rachmaninov were accounted for in three Moments Musicaux from Op.16. A whirlwind of sound engulfed the E minor (No.4), again contrasted with the lyricism in D flat major (No.5). Even the crashing waves and sonorous chords of the final C major (No.6) were well nuanced with inner voices brought out. She showed that all was not about playing loudly. A wonderful start to the competition. 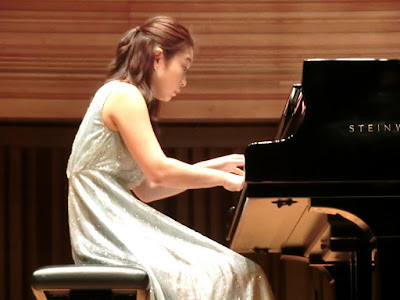 RHYTHMIE WONG (Hong Kong) also began with Scarlatti, a very fluent account of the G major Sonata (K.427), a mimicry of chirping birds interjected with surprise chords. Tchaikovsky's Dumka Op.59 came next, and if the opening sounded somewhat prosaic, the pathos of this lament did come out well in the short variations which is as virtuosic the Russian can get. The cadenza was executed brilliantly with a thrilling climax at its tail.

Her account of Ravel's La Valse was an excellent approximation of its orchestral textures, which were built up from a mysterious, murky opening to a scintillating end-of-epoch kind of cataclysm. This music has to sound dangerous, as if teetering on the brink of disaster. Her control was never less than secure, with its fatal three-quarter waltz beat kept up to the desperate end. Anyone with the name of Rhythmie will ensure nothing less. 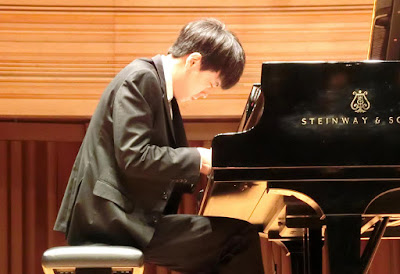 TAEK GI LEE (South Korea) chose a most probing of J.S.Bach Preludes & Fugues, the B flat minor (WTC Book One, No.22), and while I thought the prelude went a little too fast to display its gravitas, the fugue was judged just about right. Lee bends over so close to the keyboard that one feared he might hit his head against it.

There were plenty of chances of that happening in the Liszt Dante Sonata (from the Italian book of Years of Pilgrimage), but he kept his cool in a most thunderous of readings. His projection was not jarringly in-your-face and the barely controlled violence – from octaves, chords and dissonant tritones - went on overdrive. This was not a one-dimensional performance, as the descent into the inferno was balanced with a near-perfect vision of heaven, enough to turn a skeptic into a believer. 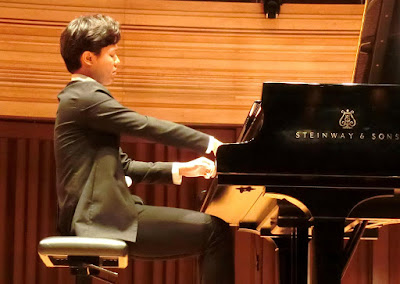 CHAO WANG (China) gave a good clean account of Beethoven's Sonata Quasi Una Fantasia in E flat major (Op.27 No.1). Its opening was kept simple and uncluttered for the 1st movement while a perpetual motion swept through the scherzo. Best was the chorale of the 3rd movement which returned like a long lost loved one in the fleet-fingered finale.

Speaking of being fleet-fingered, there can be no deadlier study than Chopin's Etude in G sharp minor (Op.25 No.6), that infamous finger-twister in thirds. That's where he stumbled briefly, which was a pity because one knows how much effort and time is needed to pull it off without a hitch. The final piece was a true rarity, the scherzo-like Prelude No.8 by Frank Martin which was filled with humour and not a little diablerie.

The most substantial and interpretively demanding programme of the session was given by HAO ZI YOH (Malaysia). On paper, it appears innocuous enough but in reality this was a most exposed of recitals. Haydn's Sonata No.37 in D major opens with the quirky motif that is spoofed by Shostakovich in his First Piano Concerto. Here she brought out its themes with sparkling wit, and that was repeated in the finale which bubbled like sparkling champagne. In between was a slow movement of utter desolation. Haydn sonatas are never “easy” but made to look easy by great musicians.

Chopin's Fourth Ballade is as familiar as one can get, but there was no sense of weariness in Yoh's performance which was applied with delicate and variegated touches, before rising to an impassioned high. There was a very long pause before the volcanic coda, which did not disappoint. Her “encore” was nothing less than Albeniz's Triana (from Iberia), that most treacherous of dances, which was blest with many felicitous nuances. Were there a few missed notes? Who cares, at least she gave it her best shot. 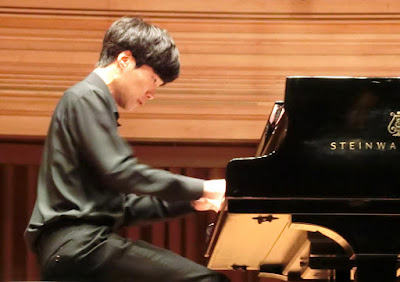 Next came Chopin's C minor Nocturne (Op.48 No.1) was sounded ponderous for most part until the passages of octaves and when the music got more excitable. Like his compatriot before him, Park's Liszt Tarantella (from Venezia e Napoli) was no less thunderous, and yet another chance to show off his facility with repeated notes. 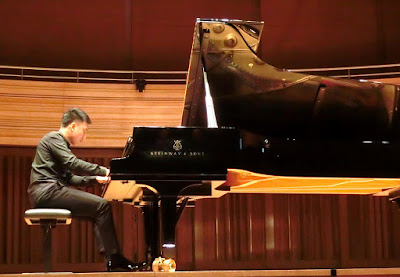 The evening session opened with BOWEN LI (China) who performed Mozart's Variations in F major on Paisiello's Salve tu, Domine (K.398), which sounds like an opera buffo theme with a quaint aura of frivolity. It is hardly a classic, but heaved a breath of fresh air. Li seemed to enjoy every bit of it, relishing each variation as they came along. Beaming from ear to ear, his playing showed it.

This soon turned to serious business in Bartok's only Piano Sonata, which is violently percussive in the outer movements. He kept a strict beat throughout, relishing in its incisively delivered chords and clusters, all timed to perfection. The slow movement was droll with bell-like tolls, and although I cannot attest to the parlando qualities that mimicked Hungarian speech patterns, it all seemed convincingly enough. 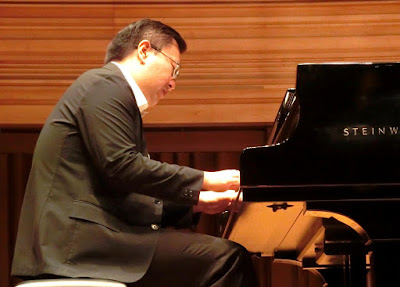 His compatriot YILEI HAO (China) chose an uncompromisingly arcane programme that would look more at home in the Husum Rarities of Piano Music Festival than in a conventional piano competition. Unfortunately that might cost him a place in the next round, but still we got a pleasant G major Sonata from Haydn (Hob.XVI:6) with deceptively simple themes and a slow movement of real pathos.

From Scriabin came not one of the more familiar Sonatas and competition fodder (Nos.2,3,4,5 or 9) but the rarely played Tenth Sonata, one favoured by Horowitz himself. Hao made a rather good case for this “sonata of insects”, revelling in its trills and ecstatic outbursts which have been described as “kisses from the sun”. An adventurous spirit who deserves a chance to advance. 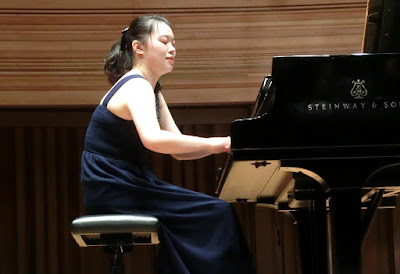 WEI TING HSIEH (Taiwan) was the Steinway Asian regional champion of 2012, and it was in this very hall as a 16-year-old where she was crowned. She opened with Mozart's Sonata in D major (K.576) with its hunting horn theme in the 1st movement. Her playing was cultivated, with very clean lines and clear counterpoint. The slow movement evoked tenderness and not a little sadness, before romping home in a playful rondo.

Even better was her account of Granados' Los Requiebros (Flatteries) from Goyescas, a performance of joyous colour and infectious rhythm beneath which the cycle's Amor y muerte (Love and Death) motif lurked surreptitiously. Her very clear articulation ensured that the rather dense thematic material never obscured its narrative of spouting superficialities. 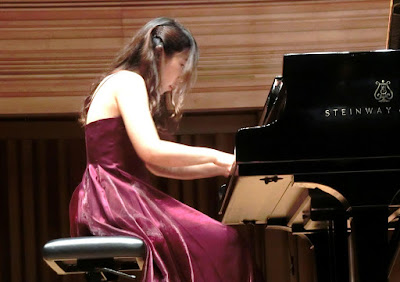 HEE JUN HAN (South Korea) also began her recital with Mozart, the well-known Duport Variations, which exudated an air of classical formality.  Hers was pretty but correct account in all areas of deportment. A simple theme, as they all are, becomes transformed into a grand apotheosis before its grateful return for the final time.

In terms of volume and heft, Han is equal to her Lisztian male compatriots in the Hungarian pianist-composer's Spanish Rhapsody, but her lack of accuracy especially at high speeds became a liability. As her forelocks got more dishevelled, thus obscuring her field of vision, so did her playing. Her ordeal had to end sometime, and that came as a relief for all concerned. 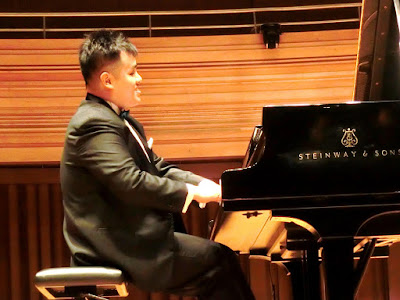 Closing the Singapore stage of the competition was our very own CLARENCE LEE, proud alumnus of the Yong Siew Toh Conservatory. He may very well be the first Singaporean to get selected to perform in The Leeds since the likes of Melvyn Tan and Seow Yit Kin in the 1970s.

His hunting-themed programme opened with Mozart's Sonata K.576, the only work to be heard twice today. Lee's advantage over Hsieh is his maturity, which translated into a more well-rounded vision of the piece. Merely playing the notes correctly was not enough, and when he got to the melancolic aria-like slow movement, he made one truly care about this music.

His show of musicality provided a different dimension in Liszt's Wilde Jagd (Wild Hunt) from the set of 12 Transcendental Etudes. Going for broke, caution was cast into the winds as thunderous chords and octaves rained in this mini-epic. What Liszt the Koreans hath wrought, Singaporeans are equal to the match, as proved with neither fear nor favour.

The results of the First Round will be announced on 1 May. Which of the eleven will be selected to be the favoured 24 for the Second Round in Leeds? Can we hope for a Singaporean (or Ukrainian based here) to advance? Watch this page.
Posted by Chang Tou Liang at 16:57