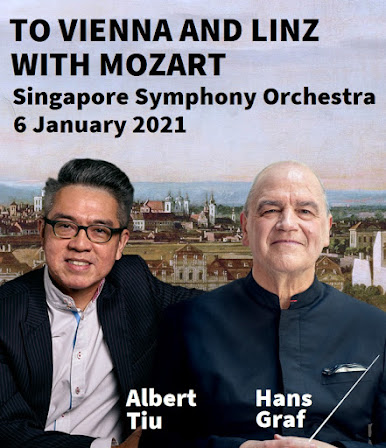 VIENNA TO LINZ WITH MOZART

Witty and ebullient Mozart from the Singapore Symphony

This review was first published on the international music review website Bachtrack (www.bachtrack.com) on 11 January 2021.

Live concerts with the Singapore Symphony Orchestra began with a pair of Christmas concerts on 15 and 16 December of last year, bringing festive cheer to an otherwise gloomy close of an annus horribilus. The new year’s first concerts were to have been a trio of evenings with Krystian Zimerman playing all five Beethoven piano concertos, but that had to be cancelled.

In their place was a single hour-long concert, retaining its Viennese flavour with the music of Mozart led by the orchestra’s Austrian chief conductor Hans Graf. What could have been crushing disappointment was dispelled when the familiar figure of Philippines-born pianist Albert Tiu strode onstage to perform Mozart’s congenial Piano Concerto No.23 in A major (K.488). The Juilliard-schooled Tiu has been a regular and well-loved fixture in the Singapore concert scene since assuming the position of Associate Professor of piano performance at the Yong Siew Toh Conservatory of Music in 2003.

Although he is better known for performing Romantic repertoire such as Rachmaninov, Scriabin, Chopin and Godowsky, Tiu’s Mozart is every bit worth the attention. To its rococo sensibilities, he offered tonal clarity, limpid fingerwork and a singing seamlessness. Accompanied discreetly and attentively by chamber forces, his solo part became an epitome of good taste and utmost decorum. 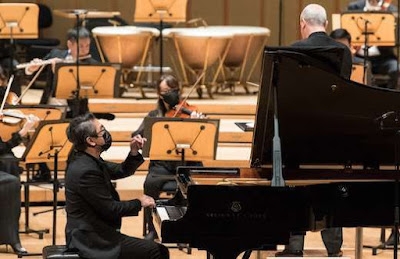 Then came a most unexpected surprise from left of field. Instead of the usual Mozart cadenza, which is not particularly virtuosic and decidedly short-winded, he served up Leopold Godowsky’s lushly (and decadently) harmonised cadenza. Those familiar with the Pole’s grandiloquent takes on Chopin’s Études might have guessed from the contrapuntal quirks, outlandish sleights of hand and generally unabashed chutzpah.

After this cheeky sojourn to the early 20th century, all returned to the 1780s for the slow movement’s lilting sicilienne. Tiu’s aria-like musings on the keyboard held sway, with melancoly and nostalgia balanced against feather-light string pizzicatos in its sublime last pages. The final rondo had an irrepressible joie de vivre, bringing the concerto to a lively close. Tiu was not done yet, the encore being his own transcription of the selfsame Adagio. Now sans orchestra, little harmonic intricacies were gently teased out, revealing yet more of Mozart’s genius.

The concert continued without intermission into Mozart’s “Linz” Symphony. The Singapore Symphony Orchestra has never been renowned as a Mozart or Haydn orchestra, having prioritised Romantic and 20th century repertoire in programming through its 42-year history. This looks to change under Salzburg-resident Hans Graf’s directorship. The performance of the symphony simply sparkled with a champagne-like ebullience. His mustering of small forces at hand lent the ensemble a buoyancy and litheness through its four movements. At no point was its overall architecture or thematic integrety sacrificed for outward display or superficial effect. 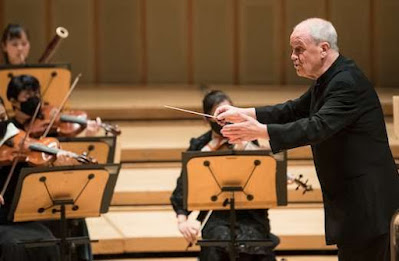 The opening introduction was direct and plain-speaking, leading to the Allegro proper with its cheeky appropriation of Handel’s Hallelujah Chorus motif. Repeating it like some kind of mantra, the music spelt pure unadulterated joy continuing into the slow movement. While not taken at a particularly slow tempo, there were nevertheless contrasts between light and shade in its alternating major and minor modes. The courtly Minuetto with its gently lilting Trio section saw oboist Rachel Walker and bassoonist Christoph Wichert with delightful repartee. The earlier liveliness returned in the spirited finale, blazing a brilliant path to the concert’s close.

Concert life in Singapore following a gradual lifting of circuit breaker measures has begun to pick up with a combination of live and streamed events. This concert, attended by a socially distanced audience, bodes well for a hopeful but somewhat uncertain future.