This review was published in The Straits Times on 9 November 2022 with the title "Symphonic celebration befitting Esplanade's 20th".

On 11 October 2002, Esplanade Concert Hall was inaugurated by the Singapore Symphony Orchestra in a concert led by Shui Lan that featured a world premiere by a Singaporean composer, a double concerto and Beethoven’s Choral Symphony. The symphony concert to commemorate the art centre’s twenty years, part of the festival In New Light – A Season Of Commissions, had a similar of combo of works but with a more local twist.

On the podium was award-winning young Singaporean conductor Lien Boon Hua, who opened the concert with Polish composer Grazyna Bacewicz’s Overture (1943). This is less of an unusual choice given that Lien was formerly an assistant conductor of the Polish National Radio Orchestra. With strings committed to virtuosic runs at the outset, answered by nippy woodwinds and incisive percussion, its form resembled Glinka’s popular Ruslan and Ludmilla Overture, making for a very effective opener. 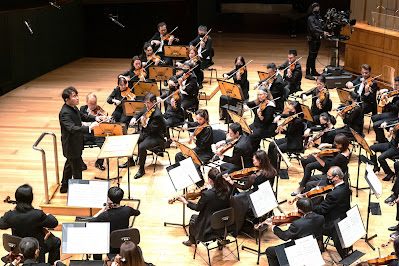 The double concerto this occasion featured as soloists the More Than Music duo of violinist Loh Jun Hong and Abigail Sin in Mendelssohn’s Concerto for Piano and Violin in D minor. A precocious work by a 14-year-old, its overlong 40 minutes was guilty of note-spinning and over-indulgent display for its own sake.

It nevertheless had Mozartian moments of sturm und drang (storm and stress) and nice melodies for which the duo was grateful to dwell upon. Loh’s singing violin tone was well complemented by Sin’s limpid keyboard work, coming off best in the slow movement’s song without words. It was not always immaculate in the first movement’s repetitiousness, but the finale’s effervescent romp more than made up for earlier longeurs. 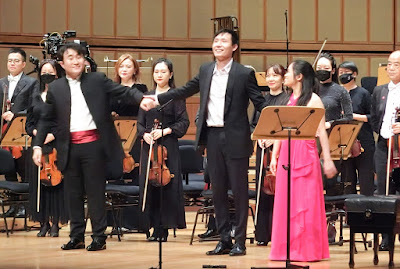 The concert’s highlight was young home-grown composers Jonathan Shin and Phoon Yu’s Illuminations, a symphony for organ, chorus and orchestra in seven movements, specially commissioned for the evening. Given the significance of Esplanade’s priceless twenty years to Singapore’s arts scene, the 35-minute-long work could be forgiven for trying to be a bit of everything – a Straussian tone poem, an organ concerto, a choral fantasy – while encompassing many different composers’ styles.

Wasn’t it Gustav Mahler who proclaimed, “A symphony is like a world, it must have everything!” or something to that effect? It opened with stillness as concertmaster Kong Zhao Hui’s solo violin rose ethereally above massed strings, much like in Pole Karol Szymanowski’s violin concertos. With the evocation of a new dawn over, voices of the Singapore Symphony Chorus and Youth Choir entered with “Break the earth and shatter sky... a symphony rises into the air made real by our dreaming”. Here the influence of Vaughan Williams’ English choral tradition came to bear.

Phoon as a soloist, then flexed his muscles, demonstrating the full might of Esplanade’s scandalously underused Klais organ. Earth-shaking and tumultuous, however brief, was his impact and now the listener was transported into the realms of the beyond like in Frenchman Olivier Messiaen’s visionary organ works.

The Singapore Symphony Children’s Choir also got into the act in the fourth movement, Iridescent / Electric, which perfectly described its part. “Watching the world with shining eyes / To cast colours upon the bay”, one imagined Benjamin Britten’s many wide-eyed and whimsical children’s choral pieces.

Shin, himself the obbligato pianist, was let loose on the orchestral canvas, which was as eclectic as it could possibly get. Avant-garde modernisms were hinted at, as were Pole Witold Lutoslawski’s scherzo-like orchestrations (now the choice of Bacewicz’s overture made even more sense), but the overriding idiom was more of Mahler and Hollywood film music, representing by the likes of Erich Korngold and John Williams. 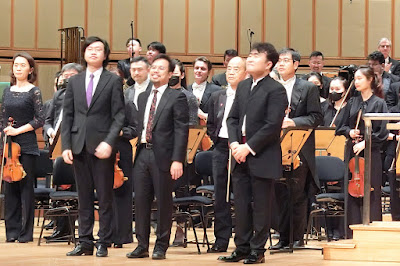 There was a choral climax closing with the words, “This distant flame that grows, keeping the light!” but the stirring work chose to end on a subtler and quiet note with Kong’s violin returning for one last time. While this was not Beethoven’s Ninth, one is better off for having witnessed the world premiere of a momentous Singaporean symphony, still a rarity, and a little history being made. 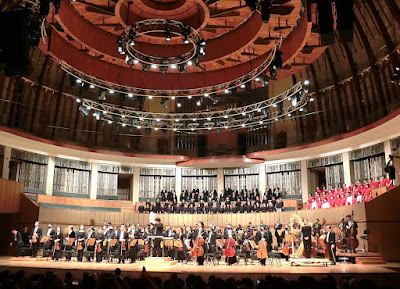