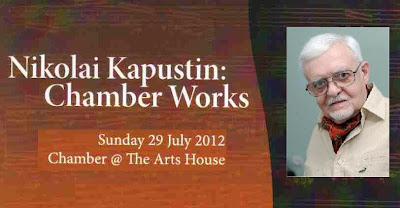 This review as published in The Straits Times on 31 July 2012 with the title "Friends explore new chamber repertoire".

Ukrainian composer Nikolai Kapustin (born 1937) is no longer a stranger in concert programmes these days, following ardent championing over the years by pianists like Nikolai Petrov, Marc-André Hamelin and Steven Osborne. Even in , Albert Lin and Nicholas Loh have performed his jazz-infused virtuosic piano pieces to much acclaim.

His chamber music, however, still represents terra incognito. So credit is due to young pianist Thomas Ang, recipient of the Hamish Dyer Musical Scholarship, for unearthing more than two hours of positive rarities for concert performance. All five works on the programme received premieres, and despite the highly approachable idiom, it was not always easy listening.

Kapustin’s music is more sophisticated and complex than that of Gershwin or Friedrich Gulda, just to name two pianist-composers who successfully “crossed-over” the classical and jazz divide. His themes are substantial, often subject to dense polyphony and counterpoint. The works are always rigorously schooled and scored note-for-note. 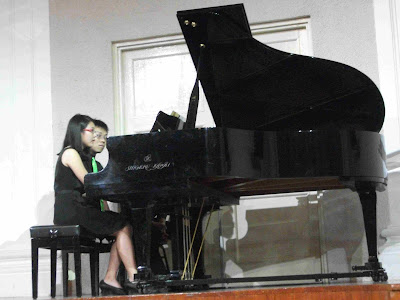 This invigorating concert opened with a four-hand-arrangement of the 4-movement Sinfonietta (1986) performed by Ang and Stephanie Lew. Like Prokofiev's Classical Symphony, it was Haydn updated but in its piano guise, sounded like a Rachmaninov suite jazzed up in big band colours. The duo clearly enjoyed their whole-hearted dig despite the avalanche of notes. 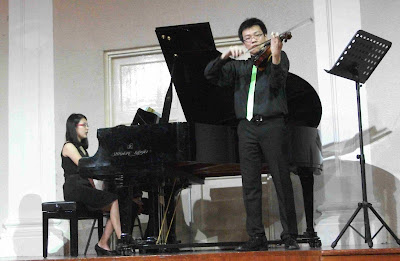 Less successful was the balance in the Violin Sonata (1992), where Ang’s violin part struggled to be heard above Lew’s busy figurations. The pizzicatos in the slow movement however piqued memories of the Blues movement from Ravel’s Violin Sonata, except that this entire work was the blues itself. The Flute Sonata (2004) had a far better airing, in part because Ang is more confident as a pianist, his crisp playing and acute sense of rhythm scoring plusses on the keyboard. 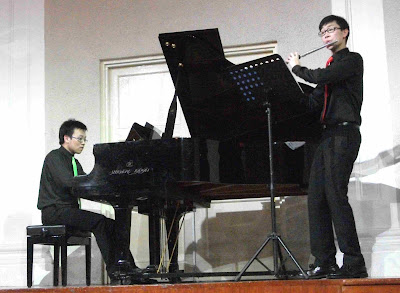 Flautist Daniel Bonaventure Lim, equally nimble and agile, projected very well throughout. Joined by cellist Chan Si Han, the Trio for Flute, Cello and Piano (1998) received the evening’s best performance. Like a genuine combo, the music leapt out from its black and white pages, headily emanating from the most hardcore and smoky of jazz nightclubs. The leisurely slow movement just launched itself attaca (without pause) into the most unbuttoned of finales. 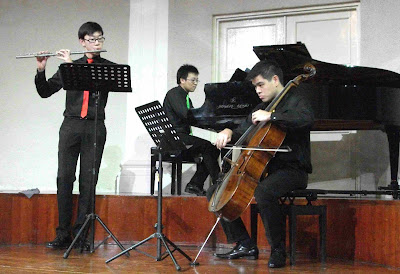 The final work was the First String Quartet (1998), where Ang returned to lead on first violin. Deprived of the piano, the music was less frenetic but no less vibrant. Here the folksy sound of Slavic quartets met headlong with bluegrass and country traditions. The quartet overcame intonation issues and rhythmic hazards in the central movements before erupting in a frantic fugal finale. Despite every note being unfamiliar, the attendance and applause for this concert was more than encouraging. Ang, who commences musical studies in this year, and his partners are urged to carry on exploring new repertoire.