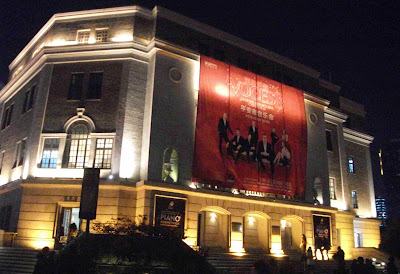 The grand finals of the Shanghai International Piano Competition was held at Shanghai Concert Hall, a converted cinema hall just south of Renmin Guangchang (People’s Square). Its close proximity to Xinshijie (), once the entertainment centre and playground of ’s moneyed and affluent suggests its rather plebeian origins. It resembles some of the minor opera houses in , and is smaller and more intimate than the Shanghai Grand Theatre. I however favour the acoustics here, which although on a dry side is still preferable to the desiccated sonics of the larger and grander venue.

The finals was accompanied by the Shanghai Philharmonic Orchestra, which had its origins as a film orchestra, conducted by a young 30-something conductor who happens to be my namesake, Zhang Liang (the Chinese characters are exactly the same). The orchestra is wholly Chinese and the playing alert and sensitive, even if there are some raw edges. Due to the dryish acoustics, the sumptuous bloom that usually accompanies the strings is absent, and brass tends to come out with a bleating stridency. 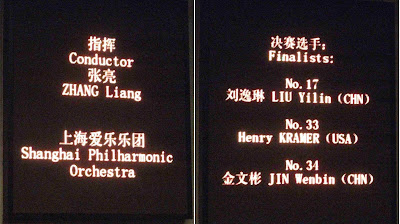 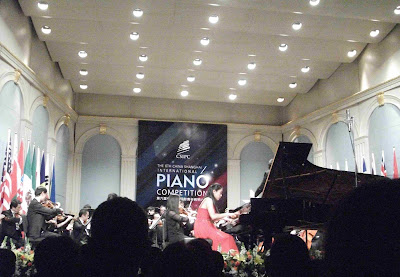 The pianists performed according to their established order when their lots were first drawn, which is the fairest way of doing things. That meant the first music to be heard was Bartok’s Third Piano Concerto performed by the Chinese lass LIU YILIN. She is a most musical soul, although a tad inexperienced. I will not be surprised to learn if this was the first time she is performing a concerto with an orchestra.

Raw nerves emerged shortly after the mellow opening, when she lost her place momentarily, and rhythmic insecurities and unsteadiness marred certain passages. The Adagio religioso slow movement however found her at her best. The chorale theme was stated with simplicity and beauty, and the night music segment was delivered with full of colour and spirit. She gradually grew into the work, and the section with rapt woodwind solos was simply beautiful. The finale began well with virtuosity brought to the fore and the fugue subject was played very crisply. Again when the rhythms became more intricate and tricky, there were missed notes, but she recovered well to close with a flourish. Liu is only seventeen, and she will have a lifetime ahead with this concerto and much other music, and I think her overall musicality and true feeling for piano literature will serve her well in the long run. 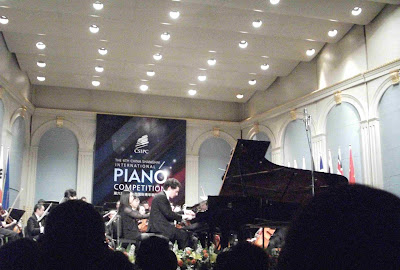 Next was HENRY KRAMER, who demonstrated a gulf in experience with his assured performance of Liszt’s First Piano Concerto in E flat major. Again great musicality dictated the proceedings. In the opening salvo of octaves and cadenza, he does not barnstorm in the manner of Argerich, but instead plays these with much dignity and nuance. But this is Liszt, and is he being too polite? The second movement’s nocturne was mellow and moody, livened up by a well-appointed cadenza and very even trills leading to the triangle-led scherzo. The true meaning of scherzando (the sense of playing a joke) was well realised, and that is where the real barnstorming for “Barenboim junior” truly began. With not a single missed note, and doing exactly what is necessary to make the work come alive, have we found the first prize winner? 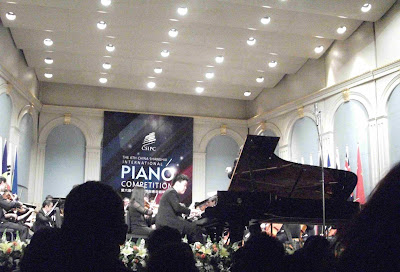 Followed without a break was JIN WENBIN in Beethoven’s Fourth Piano Concerto in G major (Op.58), arguably the most difficult of the three concertos to interpret. Opening with G major chords on both hands, he confidently set the tone for the work, which was one of great mellowness and musicality. There are neither gimmicks nor gestures bringing attention to oneself, only the joy of music expressed with much alacrity. Yet he was also able to dictate the tenor of the performance, exerting and relenting in equal degree, with the orchestra responding in kind. Taking no untoward chances, he opted for Beethoven’s own usual cadenza which was beautifully shaded. A miscue in synchronising with the orchestra’s entry provided the only blemish.

The short but dramatic slow movement – contrasting brusque strings with lush piano chords – was gorgeously handled, fully living up to the legend of Orpheus taming the Furies. The finale was another display of unadulterated joy and the ecstasy of being alive. Jin has this in loads, and his artistry is matched with very strong and secure technical capabilities. Could we now have a two way tie for the first prize?

Unlike many competitions where the jury takes an agonising long time to decide its winners, this one was particularly short. The other three semi-finalists were given a chance to perform again, Hao Yilei in Ravel, Zhu Wanchen in Liebermann and Bruno Vlahek in Scarlatti. With the spotlight of competition now extinguished, there was a certain casualness to the playing, but Vlahek still meant business in the three Scarlatti sonatas he offered, as if to demonstrate that his elimination from the semi-finals was a mistake. 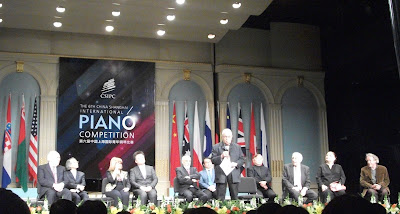 The miscellaneous prizes were announced first:

Best performance of Commissioned Work: JIN WENBIN
Best Lieder accompanist: HENRY KRAMER
Best Chinese pianist: JIN WENBIN
Chairman of the Jury, Gary Graffman, then read out that the First Prize would not be awarded, and there would be a tie for Second Prize. The mostly Chinese audience gave a gasp of surprise only after the translation into Chinese was complete. With that the final placings were already decided, and the rest became an anti-climax of sorts.

Was my effort of flying to worth all the trouble? An emphatic “yes”, because the later rounds of this competition was a display of high levels of musicality (and undoubted virtuosity as well) from all the musicians I had heard. There was very little to separate the quarter-finalists, and even less to separate the semi-finalists playing in their respective rounds. Given the same cohort of pianists in a different competition with a different set of judges, the result might have been very different. A musician of the quality of Sun Jun, Abdiel Vasquez or Bruno Vlahek might have won first prize in a different setting. With fewer participants, the performance rounds in the quarter and semi-finals were limited to the afternoons, and there was ample time to do sightseeing, shopping, catch dinner and stroll on the Bund afterwards.


The competition was very well organised and the atmosphere was congenial throughout. There were opportunities to mingle with the jury, many of whom had passed through over the years and provided me with marvellous musical memories. The He Luting Concert Hall at the Conservatory had very good acoustics for the two Steinway grands to bloom, and Shanghai Concert Hall provided a nice cameo or the finals. Most of all, music was the winner, and that is the long and short of it all.
Posted by Chang Tou Liang at 08:00