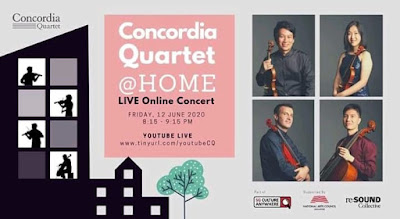 This review was published in The Straits Times on 15 June 2020 with the title "Hurdles aplenty, but quartet's first online concert a success."
The Concordia Quartet, Singapore’s latest professional chamber group, made its debut in February  at the Ngee Ann Kongsi Theatre (Funan Centre) to critical acclaim. Its second public concert was another first, a live performance by four musicians on the Internet, separated physically by Covid-19 circuit breaker and social distancing rules.

Its players, violinists Edward Tan and Kim Kyu Ri, violist Matthias Oestringer and cellist Theophilus Tan, never had face-to-face rehearsals for this concert. Instead, they played from their own living rooms, united by nifty technology, employing the Jamulus audio software, high-tech headsets and microphones, and the ubiquitous Zoom app for visual cues. 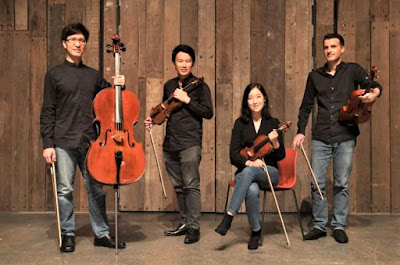 Its audience was alerted via social media, and tuned into Youtube for the concert experience. While it seemed a surreal experience attending a concert remotely, one was spared of extraneous distractions like rustling programmes, fidgety children, and worst of all, coughs and sniffles.

Concordia’s programme was a compact one, just under half an hour of music, boosted by a question-and-answer session hosted by technical controller and Resound Collective’s founder Mervin Beng. These precious few minutes were however hard earned, given the logistical hurdles to overcome, but paid off handsomely.

There was a false start at the beginning with Mozart’s Divertimento in D major (K.136) which was quickly remedied. As there was a lag phase between visual and aural inputs for the musicians, it seemed a miracle they even came together at all. All that will be down to hard work getting used to the medium and how professional musicians adapt to each other’s music-making.

Like in a jazz combo, a three-count from first violinist Tan was needed to start the music flowing, when a nod of the head used to suffice. The issue of balance surfaced for a short while in the lively opening movement, when accompanying low strings sounded over-emphatic but that was also corrected. The slow movement was lovingly coaxed, while the fast finale which necessitated pin-point accuracy was driven to a breathless close.

Judging by positive live comments from its audience, this experiment was going to be a success. The heart of the concert belonged to Russian nationalist composer Alexander Borodin’s Second String Quartet. While some hoped to hear its popular and melancolic Notturno, the more meaty opening movement was performed instead.

By now, the quartet had more than warmed up and wearing heart on sleeve, this ultra-Romantic music’s passionate throes were milked for all its worth. For the online listener, this was as good as it gets. As a short encore, the world premiere of young local composer Jonathan Shin’s highly idiomatic arrangement of the Beatles hit-song Eleanor Rigby was the icing on the cake. Judging by positive live comments from its audience, this experiment was a success.

While live concerts witnessed by a live audience in a concert hall will not die an ignominious death, could online concerts such as this be a regular feature of the new normal?

You can view the video here:
https://www.youtube.com/watch?v=k14_9OQX4zA
Posted by Chang Tou Liang at 08:00