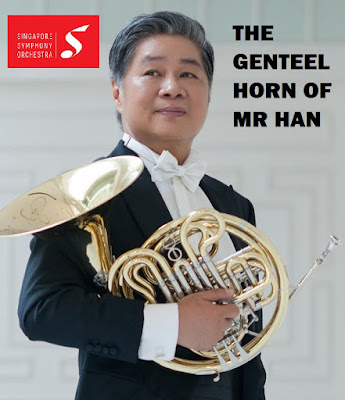 
This review was published in The Straits Times on 16 March 2020 with the title "Awe-inspiring romp as SSO French-hornist says goodbye".


The Singapore Symphony Orchestra has reached an age when long-serving musicians have begun to retire. Earlier this year, it bade farewell to veteran Leader, violinist Lynnette Seah. This evening, Principal French hornist Han Chang Chou, popularly known as Han Xiao Guang, said goodbye. Of his 41 years as a professional musician, 33 were spent with the SSO. 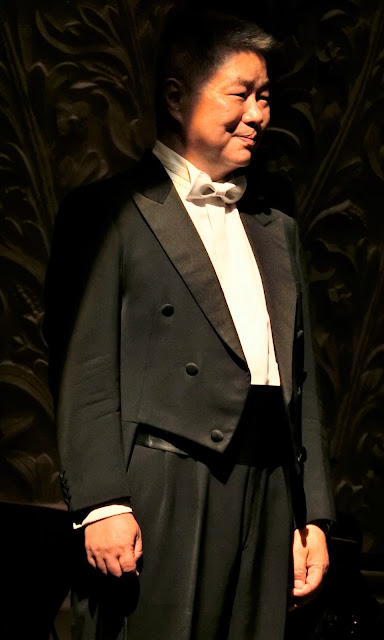 In August, he returns to his homeland China to teach at the Tianjin Juilliard School. His parting gift was a performance of Mozart’s Second Horn Concerto, ironically receiving its belated SSO premiere. Perhaps that speaks of the orchestra’s relative neglect of Classical era repertoire, but its redress was an invigorating outing with Han firmly in control. 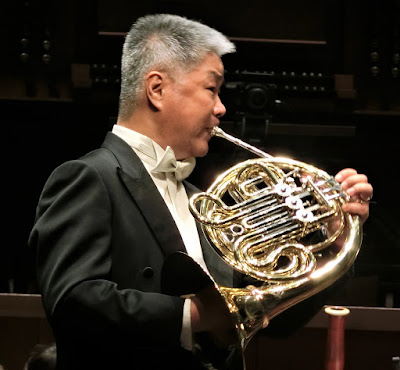 Just last week, he confidently blew away the treacherously exposed repeated solo horn passages in Shostakovich’s Tenth Symphony. This evening revealed a more sensitive side to his virtuosity, and that sonority that spelt mellow nobility. Eschewing outward display for its own sake, he was a figure of unwavering steadfastness and unflappable calm.

In the aria-like slow movement, his seamless singing tone reminded that much of Mozart’s lyricism was inspired by opera. In the Rondo finale, close sibling to that of the Fourth Horn Concerto, his agility to jump through assorted musical hoops proved to be a most enjoyable romp. An awe-inspiring one too, judging by the hearty applause that greeted its end.

The Mozart was sandwiched between two contrasted suites inspired by Moliere’s play Le Bourgeois Gentilhomme (The Would-Be Gentleman), both local premieres by chamber-sized forces conducted by Darrell Ang. This was inspired programming for the 75-minute concert which had no intermission.

Opening was the Overture and Dances from Frenchman Jean-Baptiste Lully’s accompanying music of 1670. Here was actual baroque music but performed on modern instruments in Ang’s own edition. The Overture was a French overture, a form comprising a syncopated opening section leading into a fugue.

The music was crisply articulated with three dances that followed courtly and charming. The Turkish  influences (then trending in Western Europe) were graced by a small battery of percussion, and concessions to authenticity were provided by Shane Thio’s harpsichord and Christopher Clarke’s theorbo (an antique long-necked lute).

Richard Strauss’ Le Bourgeois Gentilhomme suite from 1920 concluded the concert. Here was an example of neoclassicism, where modern composers relived old forms and styles with contemporary means. Its nine short movements were tuneful and tasteful, mostly accomplished by small groups of instruments, and often festooned with solo flourishes.

Returning as guest concertmaster, Lynnette Seah and her violin worked tirelessly, while Jon Paul Dante’s trumpet added gloss to the showy movements. Shane Thio now commanded the piano as the music danced to a more modern beat. By the final movement, The Dinner, tutti forces resounded like one of Strauss’ classic scores, Don Juan or Don Quixote. Such is the magic of chamber-sized orchestras.