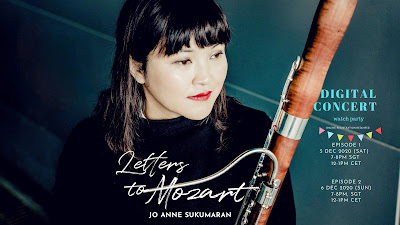 This is the season when children write letters to Santa Claus. Young Singaporean bassoonist Jo Anne Sukumaran, inspired by a visit to Mozart’s grave/memorial at Vienna’s St Marx cemetery, has conceived an intimate chamber concert of Mozart’s music, with the call for viewers to pen their own letters to Mozart. This is a unique angle to present music in an informal and unstuffy manner. Aided by presenter Priscilla Foong’s smiling and friendly disposition, this made a fresh contrast to the arch-seriousness of usual classical concerts. 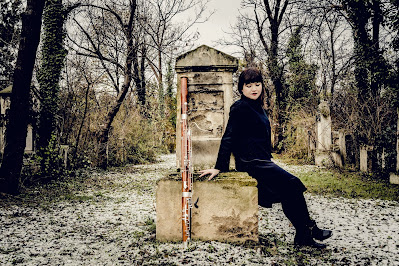 The first half opened with the String Quartet in C major (K.465), nicknamed “Dissonance” because of the sombre introduction to its first movement. Even the tonality sounds indeterminate, shifting uneasily between minor keys before emerging into the happy sunshine of C major. Mozart had his listeners spooked then, and he continues to surprise. The work in four movements received a lively and heartfelt reading from the young quartet of Joey Lau and Natalie Koh (violins), Jeremy Chiew (viola) and Tang Jia (cello), paying heed to the various nuances posed by the ever-witty and mercurial composer. The second half saw highlights from Mozart operas transcribed by Franz Danzi for bassoon and cello, with Jo Anne doing the honours accompanied by cellist Tang. Included were Voi che sapete (The Marriage of Figaro) and the duet Ah perdona al primo affetto (La Clemenza di Tito). The soprano’s lyrical lines translated well for the avuncular and deeper registers of the bassoon, and the duet came off particularly well.

For the closing act, the bassoon took the place of the flute in the Quartet No.1 in G major (K.285). Thus it became an altogether different work, the flute’s celestial chirpiness replaced by the bassoon’s earthy garrulousness. The musicians’ diligence and persuasiveness made it work, proving again that Mozart’s genius often transcended instrumental constraints. 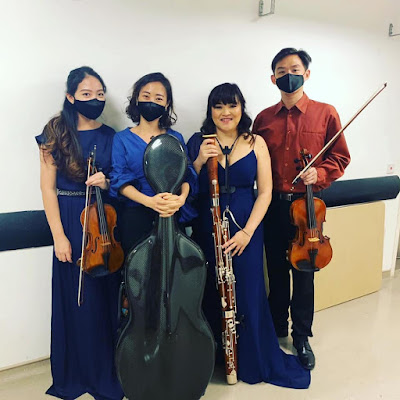 Interspersed between movements and works were excerpts from letters by Mozart, read by SSO French hornist Jamie Hersch, music critic/lecturer Marc Rochester, arts impresario Lionel Choi, and Singapore’s grammy-nominated conductor Darrell Ang. All in all, this was an enjoyable and light-hearted way to appreciate Mozart’s music, and have you thought of your own letter to Mozart?

You can view this digital concert at:

Why did you leave so soon?

Thirty-five years was far too short,

gone in a flash.

Had you stayed another twenty,

a mighty rivalry with Beethoven beckoned,

Schubert should have been your student.

your Lieder and his operas,

Past your sixty-fifth year,

what were your thoughts of young Chopin?

On experiencing Lisztomania in full stride,

or pardoning the bombasts of Berlioz.

Time is a cruel master,

but we thank the Master.

He even afforded us time

with your divine presence.