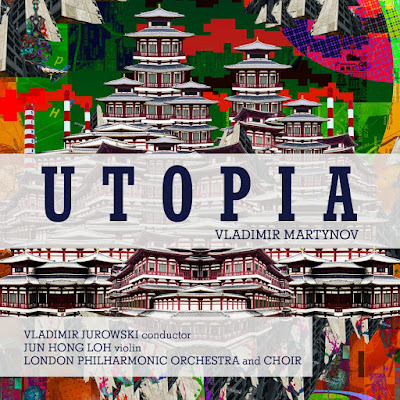 Russian composer Vladimir Martynov’s Utopia Symphony began as a commission in 2004 by Michael Tay, then-ambassador of Singapore to the Russian Federation. Its original title was Singapore: A Geopolitical Utopia, premised upon a week-long visit by the composer and his wife violinist Tatiana Grindenko to the island republic where they experienced the sights, sounds and tastes of the modern Southeast Asian city-state. First performances of Singapore took place in Moscow and Singapore in 2005, the latter involving the Singapore Symphony Orchestra conducted by Lim Yau at Espanade Concert Hall.

The 2020 iteration of the work has less to do with geography or politics but rather the pursuit of a universal and ideal state of mind. Its new title Utopia does away with the somewhat cumbersome Singapore tagline,  focusing instead on what nation states and governments dream about, which is to create the ideal environment for their citizens and residents to inhabit.

Form wise, the two-movement choral symphony remains unchanged, except for a revision in libretto. The chants of “Singapore!” in the first part have been replaced by “Sky and Earth”, in an English translation of verses from Lao Tzu’s Tao De Jing (The Way of Tao). The Russian texts describing Singapore’s geography and national flag (from the Great Soviet Encyclopaedia) have also been expunged, in its place more verses from Tao De Jing.

The 47-minute symphony is symmetrically split into two vastly different halves, as if representing the yin and yang. The first is minimalist, repetitive and kinetic, with rhythmic clapping and resonant chants. The music is reminiscent of Stravinsky’s primalism, contemporary American composer John Adams’ minimalism and at certain points, pop and rock influences heard in Leonard Bernstein’s Mass.

I remember hearing a recording of this segment accompanying moving images at the rotunda of the Singapore History Museum, suitably depicting the 24/7 hyperactivity and exuberance of modern Singapore. The Tao De Jing texts extol the virtues of a small nation state, loving one’s own community and the exhortation of people to “not visit each other until old age itself and death,” (as mouthed by speaker Neville Creed), the last seemingly prescient words given this Covid-19 global pandemic.

The second part is a portrait of serenity and blissful repose. The chorus now channels the Russian Orthodox Church as its source of inspiration, rich and sumptuous are the harmonies. Here Martynov also quotes one of his favourite composers, Robert Schumann. The theme from the opening movement of Kinderszenen (Scenes From Childhood), Von fremden Länden und Menschen (Of Foreign Lands and Peoples), is heard on the piano verbatim and barely disguised.

Less obvious is the quote from Beethoven’s song cycle An die Ferne Geliebte (To The Distant Beloved) which was in turn used in Schumann’s Fantasy in C major (Op.17). By now, the themes of love and curiosity of faraway lands become apparent. Add the entry of young Singaporean violinist Loh Jun Hong’s tender solo (performed by Grindenko aka Mrs Martynov in the premieres) and a chorus singing a hymn befitting any National Day Parade, all of which are congruent with the notion of a paradise on earth. So is this the essence of Utopia?

The excellent and committed performance by the London Philharmonic Orchestra and Chorus under Vladimir Jurowski is vividly captured in excellent sound on the LPO’s own label. Without quoting a single Malay, Chinese, Indian or Singaporean melody, Vladimir Martynov’s Utopia just be a truly quintessential Singaporean symphony.