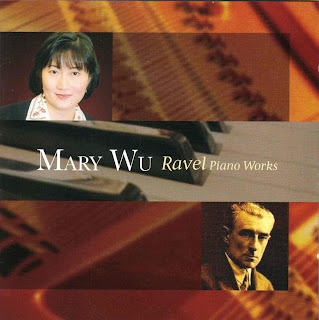 Hong Kong might seem an unusual source for a recording of Maurice Ravel’s piano music, but it is the hometown of Chinese pianist Mary Mei Loc Wu who studied with the great French-Lithuanian pianist Vlado Perlemuter (1904-2002, himself a student of Ravel) at the Yehudi Menuhin School and privately. This set does not pretend to be the complete piano works (La Valse and the two-handed version of the Mother Goose Suite are absent) but includes the major works and a couple of extras.

Comparisons with Perlemuter’s Ravel recordings (on two Nimbus CDs, recorded in the 1980s) are inevitable and Wu comes across very favourably. That is not because of Perlemuter’s extreme age (he was sight-impaired and pushing 80) and Wu’s relative youth (she is in her late 30s or early 40s), but rather Wu shares his genuine and authentic feeling for this music. Both are instinctive musicians with a penchant for the sensuous rather than fire-breathing gladiators, and this serves the music to a tee.

Wu is equally comfortable in both the impressionistic as well as structured and “antique” forms in which Ravel chose to write in. In the former category, the fearsome Gaspard de la nuit holds little terrors for her. Her Ondine is beguiling, seductive and very much capable of casting curses. There is much atmosphere in Le Gibet with the droll tolling of a distant church-bell as doleful accompaniment. Wu’s very well-paced Scarbo takes a half-minute longer than Perlemuter’s, but there is never the feeling of drag. The coruscating climaxes still arrive and resound with the same vehemence and malevolence. The CD booklet helpfully contains Aloysius Bertrand’s poems as well as an English translation.

In Miroirs, images and scenes are conjured through the Ravel’s inimitable writing, no better illustrated in the watery realm of Une barque sur l’ocean, where gentle lapping waves soon takes on the violence of a mini squall. Wu combines the sensitivity of a supreme colourist with freewheeling virtuosity. Whether evoking the flitting of moths (Noctuelles) and birdsong (Oiseaux tristes), delicately balancing six sets of bells in La Vallée des Cloches, or jesting irrepressibly in Alborada del gracioso, all these fall comfortably within her hands. In this company, the playing fountains of Jeux d’eau, a work of Lisztian inspiration, are indelibly captured. 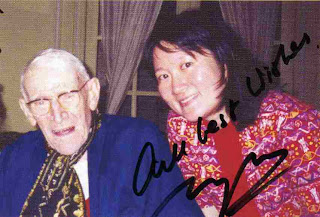 Mary Wu with her teacher Vlado Perlemuter in 2001.

Valses nobles et sentimentales are handled with just the right touch of whimsy and nostalgia, and there is little to separate her account with Perlemuter’s. The most elusive (but sublime) dance is the eighth and final one, where whiffs and fragments of the earlier waltzes appear and disappear like a mirage over a misty landscape. Wu shades this with much beauty and colour.

The pendant of “antique” dances of La Tombeau de Couperin (each dedicated to Ravel’s friends killed in the Great War) flow with purpose and great clarity, beginning with the fluid Prélude and Fugue. The latter does not sound like an academic exercise in Wu’s hands. Her handling of the ensuing Forlane, Rigaudon and Menuet also ensures a variety of colours and moods. Lightness of touch and lightning reflexes distinguish the final Toccata, where others are satisfied with rumbling along. The familiar Pavane pour une infante defunte is lovingly crafted, with wistfulness and gravitas brought out in equal measure.

The usual miniatures have been included. The two pastiches after Borodin and Chabrier are slight but exude a period charm, while the two minuets (Menuet antique and Menuet sur le nom d’Haydn) are a delightful combination of simplicity and formality. Not the most taxing or profound of music, but played lovingly.

The extras not found in the Perlemuter set are interesting if not vital. The early Serenade grotesque of 1893 (Ravel’s own shabby little shocker à la Bartok’s Allegro barbaro) is amusing for its simulation of a guitar but could have sounded more grotesque than its title suggests. The Piece en forme de Habañera, originally a vocal work, is totally entrancing in Maurice Dumesnil’s transcription.

At budget price (retailing at about HKD 110, just under SGD 20), this is a wholly recommendable set which compares well with the more established names in the field. I can think of only one other Asian pianist to have covered this repertoire; Kun Woo Paik’s set on Dante is no longer available. The Perlemuter set is equally hard to find, but licensed pressings from China (with programme notes in Chinese) at budget price may be found in East Asia.

For the most “complete” set of Ravel solo works, look to Joel-François Thiollier on Naxos, which includes La Valse and the early but rambling La Parade (not vintage Ravel). Pascal Rogé’s budget set on Double Decca has the four-hands version (with Denise-Françoise Rogé) of Mother Goose Suite. However one will not find the lovely Habañera in either of these sets.