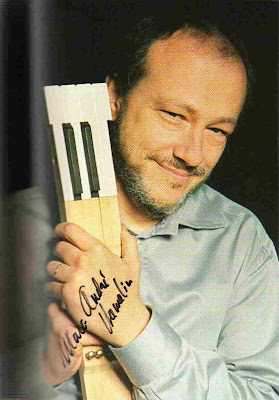 The Pied Piper himself, Marc-André Hamelin, was in Singapore last weekend where he performed Mendelssohn’s Piano Concerto No.1 with the Singapore Symphony Orchestra conducted by Günther Herbig. He is currently on a 3-week long Australasian tour, also performing in Kuala Lumpur (Brahms No.2 with the Malaysian Philharmonic), Hong Kong (Recitals with Haydn, Chopin, Debussy, Godowsky and his own compositions) and Melbourne (Strauss Burleske with the Melbourne Symphony).

We last had a nice long chat in 1997, when he made his first Singapore splash at the Singapore International Piano Festival. So what’s changed from 11 years ago? Hamelin’s discography on Hyperion has progressed geometrically. Alkan, Godowsky, Medtner, Ornstein, Rzewski, Szymanowski, Villa-Lobos, Scriabin and Shchedrin have all made their mark on the pianophile world. His more recent releases have been Haydn Sonatas, Brahms Piano Quartets and Piano Concerto No.2, and wait for this… Chopin’s Second and Third Sonatas. Has Hardcore Hamelin gone mainstream?

Thank goodness not. Over lunch and tea, he assures that his concert repertoire and recording smorgasbord are two separate entities. Mainstream repertoire is what he performs most of the time, and the rarities are reserved for the recording studio and pianophile events like the Rarities of Piano Music Festival at Schloss vor Husum in Germany. The “change” in stance arose as Hyperion has begun to entrust him with more core repertoire. The breakthrough came with his Schumann Carnaval disc (CDA 67120), which “required a lot of persuading”. That and at least six other of his Hyperion recordings have been shortlisted in 1001 Classical Recordings You Must Hear Before You Die (Octopus Books). 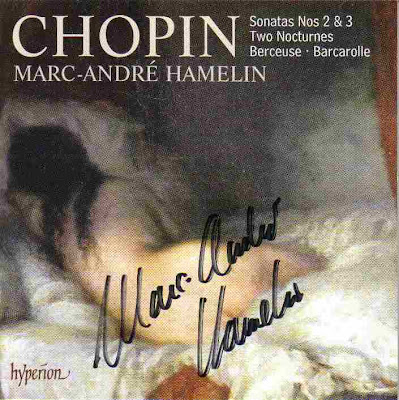 Hamelin's latest release.
He obliged by signing "on the buns".
Hyperion’s faith has been repaid as both pianist and A&R are very happy with the lastest offering, Chopin’s Sonatas with the Berceuse, Barcarolle, and two Nocturnes (Op.27) as substantial fillers (CDA 67706). “It also has a picture of a naked girl on the cover!” Hamelin helpfully adds.

Future recordings in the pipeline: more Haydn Sonatas with the F minor Variations and C major Fantasy, Schumann’s Piano Quintet (with the Takacs Quartet), possibly further piano quartets (Leopold Trio) by Fauré and Mendelssohn. Interestingly, Hamelin has himself written a Passacaglia for piano quintet, a work with 19 variations (first performed in 2002 in Halifax, Nova Scotia) which he describes as “very dark”. 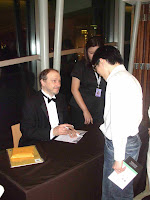 Speaking about compositions, Hamelin’s 12 Études will be published by C.F.Peters sometime in 2009. In a volume running over a hundred pages, Hamelin follows in an illustrious line of composers like Chopin, Liszt, Alkan, Debussy, Scriabin and William Bolcom, all of whom wrote studies in groups of a dozen. Six of these are elaborations on pre-existing music and six are completely original compositions. With his permission, here are the twelve:

No.1 Triple Étude (after Chopin)
No.2 Coma berenices (Berenice’s Hair) *
No.3 d’après Paganini-Liszt (La Campanella)
No.4 Étude (after Alkan)
No.5 Toccata grottesca *
No.6 Omaggio a Domenico Scarlatti *
No.7 Étude after Tchaikovsky (Lullaby Op.16 No.1) for the left hand
No.8 Erlkönig (after Goethe) *
No.9 d’après Rossini (La Danza)
No.10 d’après Chopin (pour les idées noiré)
No.11 Tango * – a work currently in progress
No.12 Prélude & Fugue *
* original works
(The orginal No.1 after Rimsky-Korsakov’s Bumble Bee is no longer in the list.) 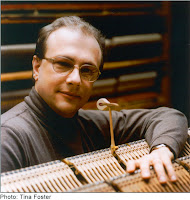 One étude-like piece that does not make that number is Hamelin’s reworking of Abreu’s Tico tico no fuba. “I was at Schotts in London when I saw a series of Virtuoso Transcriptions scores, which included something by Olli Mustonen. I submitted two transcriptions of my own, Tico and the Glazunov Petit Adagio (from The Seasons). And so they accepted Tico,” he recounted. The toughest half page in that score sees the left hand play the melody and rhythm of Tico, while the right hand plays Chopin’s Chromatic Étude in A minor (Op.10 No.2). This is just preceded by a sly quote from Beethoven’s Für Elise. Hamelin was on a train ride from Montreal to Philadelphia when he thought, “Oh noooo! I can’t do this!” We’re sure glad he did.

Another “encore” that has been published (by Theodore Presser), is the Ring Tone Waltz, formerly known as the Valse irritation après Nokia. Everyone knows what that ubiquitous ring tone sounds like. Just do not leave your cellphones on in a Hamelin recital, lest he’ll be forced to play it.

More recently, Hamelin has begun to list his father Gilles Hamelin as one of his teachers. Although he was a pharmacist and amateur pianist, his catholic pianophilic tastes rubbed on to the younger Hamelin. Who were his, and Marc-André’s favourite pianists and role models? “He ran the gamut of historical pianists, including Hofmann, Rosenthal, Friedman, Lhevinne and Godowsky. He preferred the free for all aspects of piano playing. His heart was in the past, feeling that contemporary pianists were too restrained. He had only one or two Alfred Brendel LPs in his collection – Liszt’s Christmas Tree and a selection of Hungarian Rhapsodies. He was also extremely critical of Glenn Gould’s recordings. Despite being Canadian, we hardly talked much about Gould.” 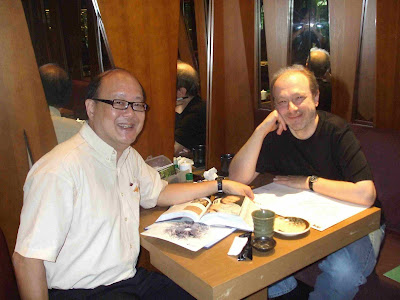 That question had to come. Will Hamelin ever attempt to perform or record Khaikhosru Sorabji’s Opus Clavicembalisticum, once listed in the Guinness Book of World Records as the world’s longest piano work? The answer was an emphatic NO. “Do people think that I like to play or record pieces just because they are difficult? I recently attended the New York premiere of the OC, and guess how many people attended? About 60 to 75 at most. Do I want to spend a large chunk of my life learning a work that has extraordinarily little reward? No thanks. What is the point of it? Those who will me to do it are wishing me to an early grave!”

Pianists are known for their longevity, but Hamelin who is still in his 40s is not taking any chances. He eats well but carefully, avoiding the carbohydrates that would worsen diabetes, and consumes only a protein load two hours before a concert. Tamago, Unagi, a handful of beans, Diet Coke and green tea are what he has for lunch. (He had earlier dared me to include his lunch menu in this article!)

He brings out from his wallet a folded photo, and declared, “You can quote me on this!” As his divorce from singer Jody Karin Applebaum is being finalised, he is proud to reveal the new love of his life, Boston-area radio station WGBH 89.7 host Cathy Fuller, who is also a pianist. “There is an interview programme from 2003 with 40 minutes of music and 20 minutes of talk, where you can catch the very first hour of our relationship!” Well spoken like a giddy-headed someone who has just discovered the glories of the piano for the very first time.
Posted by Chang Tou Liang at 15:11