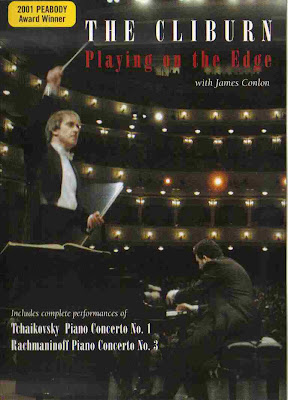 Director: Peter Rosen
Presenter: None
Conductor: James Conlon
What happened: The Russian-speakers return with a vengeance. For the first time ever, the 1st prize is shared. 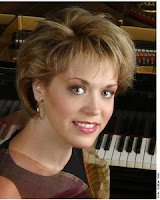 Narrative techniques:
Homes in on the six finalists from the outset, presenting human interest stories and portraying pianists as human personalities, warts and all. Perhaps the best documentary of the Van Cliburn to be made.

“She is my best teacher, because she never tell me I am good. Never!” Olga Kern speaks about her mother.

“When I was 17, I have dream. It was big old building. I go inside and see Rachmaninov, and he told me, “Ah good Olga, you have to play for me.” Olga Kern hallucinates.
“Sometimes you just don’t think you can make it. Sometimes it is the dark aspect of it. But then when you are on stage, it goes away. It does for me.” Antonio Pompa-Baldi finds inspiration.

Interviewer: “That was the loudest response to any performer so far in this competition. You put all your eggs in the two pieces, and that last one has got to be one of the hardest in the repertoire. That was a bit of a gamble wasn’t it?”

Maxim Philippov (left) : “Yes.”
Laughs all around.
Philippov: “Well you asked me, and I answered you.”

Andrew Russo (left) becomes the first pianist in the history of the competition to “play the insides of the piano” in George Crumb’s A Little Suite for Christmas. He wears an earring, eats bananas before playing, and enters “the Zen zone” by lying on the floor of his dressing room. Too bad the judges weren’t too convinced.

Olga Kern tries on a $2600 evening gown, and realises that she can’t afford it. It’s just as well she won.

Cringeworthy moments:
Olga Kern and her tattered Gutheil Edition score of Rachmaninov’s Piano Concerto No.3, handed down from her great-grandmother.

Stanislav Ioudenitch (left), having recovered from his scalded hands, complaining about house parrots and how their squawking prevented him from practising. Wearing gloves, getting a hair dryer to blow his hands and sitting on a low stool, does he really think he’s the next Glenn Gould?
Sergei Kudriakov declaring that making a tortilla is more difficult than playing the piano, in his case, Stravinsky's Three Movements from Petrushka.

Oleksiy Koltakov’s (left) domineering Svengali-like teacher (and later father-in-law) Victor Makarov (below) toying with him like a puppet on a stick in Liszt's Sonata in B minor, Hungarian Rhapsody No.2 (Horowitz transcription) and Rachmaninov's Piano Concerto No.3. Doesn’t the poor boy have a mind of his own?

Van Cliburn appears for: 47 seconds
Extras: DVD recordings of Tchaikovsky Piano Concerto No.1 (Ioudenitch) and Rachmaninov’s Piano Concerto No.3 (Kern) with the Fort Worth Symphony Orchestra and James Conlon. Well worth watching. 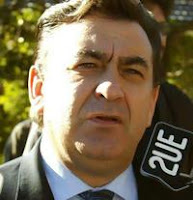 Aftermath: Victor Makarov (left) is sentenced by a Sydney court in 2005 to 12 years for 26 counts of sexual assault on 5 students aged between 12 and 17. “Abusing boys was in my nature,” he is quoted to have said in the Sydney Morning Herald. An Australian paedophile / sex offender registry has him as its poster boy.
Posted by Chang Tou Liang at 11:41