Tales from the Arabian Nights / Orchestra of the Music Makers / Review 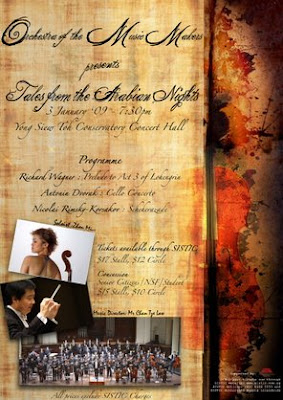 TALES FROM THE ARABIAN NIGHTS
Orchestra of the Music Makers
CHAN TZE LAW, Conductor
Yong Siew Toh Conservatory Concert Hall
Saturday (3 January 2009)
This review was published in The Straits Times on 5 January 2009.
“We are the music-makers. And we are the dreamers of dreams”, the first lines of Arthur O’Shaughnessy’s Ode is the inspiration for Singapore’s latest symphony orchestra, the Orchestra of the Music Makers (OMM). Formed by music students and alumni of local youth and school orchestras, this amateur ensemble could not have had a more ambitious opening act.

Its “soft launch” in August last year, accompanying HSBC Youth Excellence awardees in concert, had fired the first warning shots. This encounter showed a full-scale campaign of symphonic endeavour underway, with a demanding season extending till August.
It took some three minutes for OMM to fully warm up. Wagner’s rousing Prelude to Act Three of Lohengrin was hampered by hesitant woodwinds and over-exuberant brass; the overall effect was to create a big noise. But that was merely a sign of young people straining on the leash and raring to go. 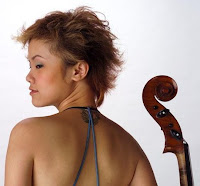 By the opening tutti of Dvorak’s Cello Concerto in B minor (Op.104), much of the initial jitters had calmed as the group took to the task of partnering prize-winning cellist Zhou Mi (left) . Zhou is an unusually sensitive musician, one whose conception of the warhorse was borne of blood, sweat, toil and tears. Outwardly confident yet intimate in sound, rarely has the music yielded more tragic vistas as this.

The OMM under master orchestra-builder Chan Tze Law (left) followed her every nuance and gesture, complementing each passionate phrase with riveting ripostes of its own, which made for an invigorating and almost exhausting outing.
Even more impressive was its delivery of Rimsky-Korsakov’s Scheherazade, which began imposingly and maintained its tautly driven narrative throughout. The pace also flexed ever so supplely, allowing wonderful solos by guest Concertmaster Chan Yoong Han (violin) and Laura Peh (harp) – depicting the seductive storyteller - to shine through. 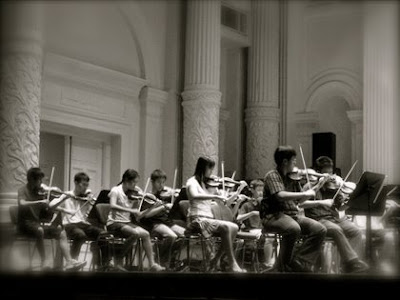 The rich and colourful score saw the lush strings on a field day. Dotted with many more tricky solos, further shows of virtuosity from individual musicians were on show – just too many to name. The encore, Smetana's Dance of the Comedians from The Bartered Bride was similarly invigorating.
More importantly, this was a bona fide concert showing befitting professionals, not merely an amateur run-through. Its fair share of rough spots may be ironed out with time and experience, but its spirit of joie de vivre irreplaceable. Professional orchestras, do take note!
Posted by Chang Tou Liang at 07:53