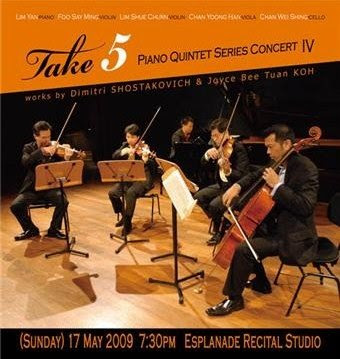 TAKE 5
Piano Quintet Concert IV:
Shostakovich & Joyce Koh
Esplanade Recital Studio
Sunday (17 May 2009)
An edited version of this review was published in The Straits Times on 19 May 2009.
Local audiences have come a long way, especially when a chamber concert with Shostakovich as its most conservative item garnered a sold-out house. Add the fact that the majority of the audience was under 30 years old, one also pondered chamber music as a growth industry. The piano quintet Take 5, in four concerts has established itself as a name second only to the T’ang Quartet. No small feat. 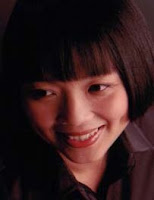 Its first commissioned piece was by Joyce Koh (left), long considered the hardcore avant-gardist among local composers. The title What’ll We Do? comes from Samuel Beckett’s nihilistic play Waiting For Godot, the music a reflection on its pacing of dialogue and thought processes. In a concentrated 16 minutes, Koh made little concession for the audience yet did not talk down to them.

A verbal preamble by the composer was helpful in defining the themes and pivotal phrases, but it was the performance that resonated deeply. While the musical language was unapologetically atonal – recalling the most uncompromising of Schoenberg and Webern – the committed execution left no doubt about the players’ convictions.

Violinist Foo Say Ming and violist Chan Yoong Han (representing Vladimir) paired off against violinist Lim Shue Churn and cellist Chan Wei Shing (Estragon) as fellow protagonists in their shared fears and neurosis. Lim Yan’s piano (Godot?), both assertive and conciliatory, was the glue that held their parts together. In the final movement Let’s Stop Talking For A Minute, a brief but treacherous moto perpetuo for the piano’s benefit closed the work to much applause.

The audience was silent throughout, obviously gripped by a musical drama that never let off its pressure on the jugular. Like the play, this work would prove more respected than adored. Timing was crucial; anything longer might have proved unsustainable while any shortfall would have made much less sense. In this respect, Koh is a master (or mistress?) of musical suspense.

Alongside this, Shostakovich’s Piano Quintet in G minor – usually described as thorny and ironic - seemed a breeze. The substantial Prelude and Fugue revealed mastery of ensemble and contrapuntal playing. Even if there were some intonation problems along the way, these were slight in the face of the onslaught of angst and vitriol that coloured this masterpiece. Take 5 encored the madcap Scherzo, and why not? Its off-the-cuff jibes and hidden messages aptly summed up the evening’s enthralling fare.
Posted by Chang Tou Liang at 10:47