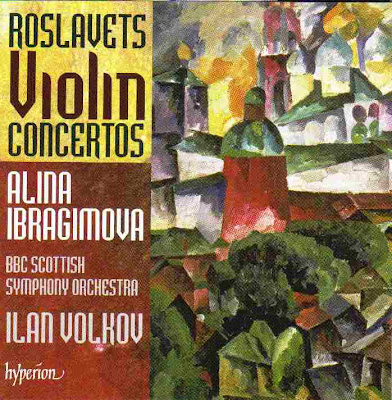 Nikolai Roslavets (1881-1944) was a prime representative of the Soviet avant-garde during the 1920s, when a spirit of experimentation flourished before Stalin’s oppressive artistic restrictions came into force. Also known as the Russian Schoenberg, Roslavets’ music flirted with atonalism but never actually crossed the line. His two violin concertos take a stab at a genre that had its hey-day in the 19th century. The ambitious 38-minute-long Violin Concerto No.1 (1925) is one post-Wagnerian rhapsody, full of Tristanesque leitmotifs and twists, but without the voices. Violin Concerto No.2 (1936) is half its length and has a more impressionistic feel, with the picturesque scores of Delius and Bax coming to mind.

Young Russian violinist Alina Ibragimova is both expressive and brilliant in this rarefied repertoire, definitely a name to watch out for. More approachable than Alban Berg, less ascerbic than Bartok; by today’s trends, Roslavets would have been a top-rate film composer. 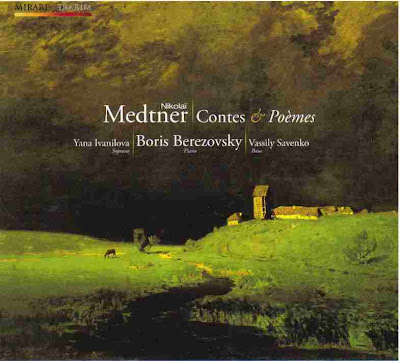 The music of Russian composer Nikolai Medtner (1880-1951) reveals its secrets less readily than those of his contemporaries Rachmaninov and Scriabin. Hence the relative obscurity, but those willing to venture beyond heart-on-sleeve emotions and Romantic gestures will find ample reward. Medtner’s songs or Romances, sung by soprano Yana Ivanova and bass Vassily Savenko, go deep into the Russian soul of Pushkin and Lermontov. The main draw is a fine selection of Skazki or Contes (Fairy Tales) for piano, which yield melody, drama and counterpoint in abundance. The March of the Paladin (Op.14 No.2) is imperious in both intent and pianistic detail. Campanella (Op.20 No.2) is no Paganinian tinkle but bears the full fearsome might of alarm bells, portents of tragedy and disaster. Russian pianist Boris Berezovsky, without doubt one of Medtner’s finest advocates, deserves to be heard. 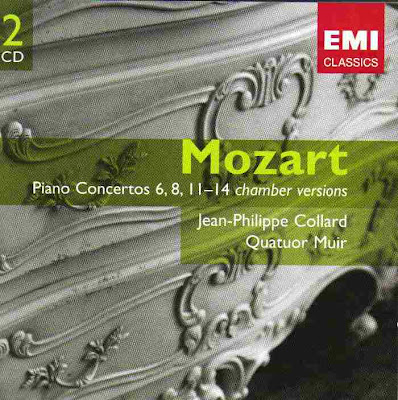 It may be said that Mozart’s piano concertos are the ultimate in chamber music. Thus it is unsurprising to find that several of the earlier concertos exist in a quattro versions, scored for piano and string quartet. The transparent and intimate nature of his writing allow for this “reduction”, which sound anything but incomplete. Here are six prime examples, Concertos Nos.6, 8, 11 through 14. It is the latter four that come across most convincingly, as these represent Mozart in his development as the genre’s foremost exponent. Only in the C major No.13, where brass and timpani contribute to its march-like quality, does this arrangement come somewhat short. French pianist Jean-Philippe Collard is sensitive and unfailingly musical, and together with his string partners make this album a totally enjoyable experience.
Posted by Chang Tou Liang at 11:28