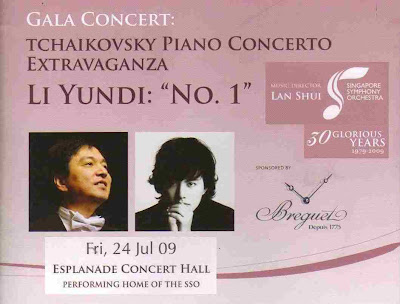 This was the concert everybody was waiting for. With tickets sold-out many weeks in advance, piano fanciers had keenly anticipated the return of Chinese superstar pianist Li Yundi after a hiatus of seven years. He had performed a solo recital at Esplanade’s Opening Festival in 2002 and was expected to return with a big splash. The reality was quite the opposite.

But first, the audience was obligated to sit through the forty-odd minutes of Hungarian composer Karl Goldmark’s Rustic Wedding Symphony. This five-movement work had its heyday several decades ago, and was even recorded by the likes of Bernstein and Previn. Overlong by half, it has its moments of naïve folksy charm (think Smetana’s Bartered Bride) with the best music coming in the fourth and fifth movements. Performed with much enthusiasm and verve, the orchestra made a best possible case for it, and one would not mind listening to it again albeit in small doses.
If only the same could be said of Li Yundi’s ham-fisted assault on what is possibly the world’s most popular concerto. His performance may be summed up in two words: shockingly bad. From its outset, it seemed that his intent was to pummel out everything the score had to offer, as if to out-Lang Lang Lang Lang. Coupling a cold harsh tone brutally extracted from a brittle-sounding piano and muddled peddling, poor Tchaikovsky was left looking like some battered bride. 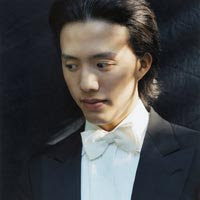 Li (left) certainly loves the bravado that the octave passages offered, but with neither musical thought nor sound judgment applied, these had the subtlety of a bull in a china shop. Dropped or misplaced notes accumulated – so many as to keep any panhandler well fed – and the coup de grace came with a royal hash in the first movement’s cadenza.

Things did not improve in the second or third movements, with wild instincts running roughshod over the delicate prestissimo episode in the former, once famously described as a “scherzo of fireflies”. There was also a major desynchronisation between pianist and orchestra in the exciting run up to the finale’s grand coda. Wham, bam, thank you, m’am.

The ending was loud and emphatic to be sure. To add insult to injury, the frankly over-generous applause offered was rewarded with a horribly chopped-up and crudely played Schumann-Liszt Widmung (Dedication) as the sole encore. Word has it that he had a plane to catch. Destination: Nowhere?
This travesty of a performance may have been a one-off. However with so many young Chinese pianists – Wang Yuja, Chen Sa, Chen Jie, Wu Di and recently crowned Van Cliburn competition winner Zhang Haochen – emerging and not to mention the omni-present Lang Lang, Li Yundi looks in dire need of reinventing himself.
Posted by Chang Tou Liang at 00:08

In 30 years of concert-going, this has to rank as the very worst concerto performance at an SSO concert. Even memories of Andrei Gavrilov's outrageous but entertaining Rach 3 (2000), Kong Xiang Dong's Rach Cycle fiasco (1993), or Marie-Francoise Bucquet's infamous rupture in the Fauré Ballade(1982) pale in comparison with this outing.

Sure there were many in the audience who cheered Li Yundi on despite his affront, but anybody who cares about music-making, Tchaikovsky and the piano deserved far better.

recent experiences of BAD BAD performances really leave a sour taste in my mouth. sure, if the performer just happens to have an off-day, we can all empathise. but when a performer blatantly shows disrespect to the composer, music, audience, then i think it's time Singapore audiences has the gonads to BOO the performers. It's about time performers are held accountable for their performances, if they insist on getting paid like superstars. just think about it, if u walked into an expensive restaurant and get served uncooked food, would u ask for a refund?