MENDELSSOHN AND BEYOND / The Philharmonic Chamber Choir / Review 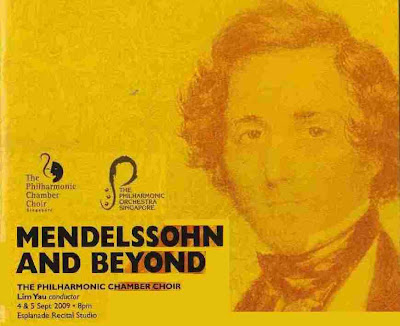 MENDELSSOHN AND BEYOND
The Philharmonic Chamber Choir
LIM YAU, Conductor
Saturday (5 September 2009)
This review was published in The Straits Times on 7 September 2009.
The genius of Felix Mendelssohn, whose bicentenary is celebrated this year, was all down to his prodigious and complete mastery of older forms. Dying young from a series of strokes, he neither broke new ground nor revolutionised music the way his contemporaries Chopin, Liszt or Wagner did. He would not have chosen to, at any rate, having comfortably ensconced himself in an exceedingly palatable and totally bourgeois music idiom.

Mendelssohn’s German part-songs were the showcase in The Philharmonic Chamber Choir’s enjoyable concert, thematically grouped as “open air” songs, bird-inspired songs, and all time favourites. Rich harmonies defining such Teutonic pastoral subjects and fuzzy emotions to match will always be balm to the ear. The choir rose to the challenge, responding with a gratifyingly warm tone and well enounced German that always reassured and soothed.
From the happy outset of summer in May Song to the darker shadings of Autumn Song, a sense of brightness and optimism shone through in the singing. The topic of love invariably crops up, as in Run Away With Me and The Happy One, which was served with an innocent and bright-eyed countenance, leagues away from Schubert’s despair and desolation.
The saccharine sweetness of Mendelssohn could not have been sustained over 90 minutes, thus the astute programming of related but contrasting works was crucial. The Norwegian Knut Nystedt’s Immortal Bach, a deconstruction of the Bach chorale Komm, Susser Tod (Come, Sweet Death) displayed both symmetry and synergy opposite Singaporean Ng Tian Hui’s Siehe! (Behold!). The repetitive and gamelan-like strains of the latter resounded with the hypnotically charged former like a cathedral (or temple) of rarefied sonority.