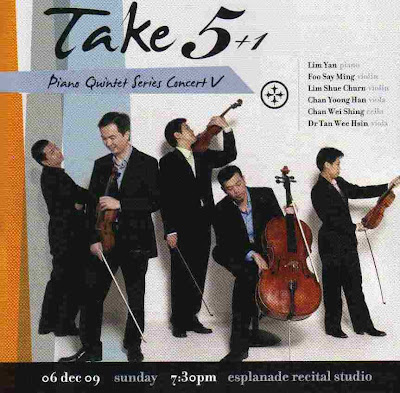 TAKE 5 + 1
Esplanade Recital Studio
Sunday (6 December 2009)
This review was published in The Straits Times on 8 December 2009.

The quest to perform all the piano quintets in the classical repertoire has taken the musicians of Take 5 to well-trodden environs as well as obscure nooks and crannies. No endeavour has been as adventurous as its Singapore premiere of Wolfgang Erich Korngold’s Piano Quintet of 1921. Korngold (below) was the brilliant Viennese composing children prodigy who later found fame and notoriety as a Hollywood film composer. 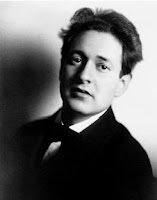 His half-hour long quintet did not sound like movie music; instead it was the other way round. Korngold‘s blend of bittersweet melodies, aromatic harmonies and heart-wrenching climaxes, like those of Rachmaninov, became the widely imitated stuff of celluloid fodder. His style is however closer to that of Richard Strauss and Fritz Kreisler, mildly flavoured with the decadence of Second Viennese School dissonance.

Take 5 luxuriated in the sheer opulence of the music, wallowing in the receding embers of once-lush Romanticism. There were dark clouds for sure, but silver linings abounded, not least in the suffocating orgasmic climaxes of the central slow movement, a set of variations on the most popular of Korngold’s own Songs of Farewell (Lieder des Abschieds).

Each string instrument had its own solos in the limelight, but they rallied around the overworked pianist Lim Yan, whose arpeggio cascades and crashing chords flew from one high to the next, before consummating in an intoxicating finish. 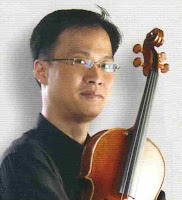 Schumann’s Piano Quintet in E flat major (Op.44) is a well-established classic, but one never tires of its familiar strains, especially with a performance of the caliber of Take 5. From start to end, a palpable sense of purpose coursed through the ensemble (with the sixth player Tan Wee Hsin (left) substituting for Chan Yoong Han on viola), one that kept the reading taut and gripping.

The fine art was not just in delivering the notes accurately but its togetherness and fine control, which allowed the music to alternate between resolute unisons and singing episodes, portraying sorrow and irony to joy and ecstasy. Take 5 has progressed with each outing, and should no longer be seen as a pianist with a string quartet, but five independent virtuosos united in one resonating voice.
Posted by Chang Tou Liang at 15:09