A Few Words with VOVKA ASHKENAZY 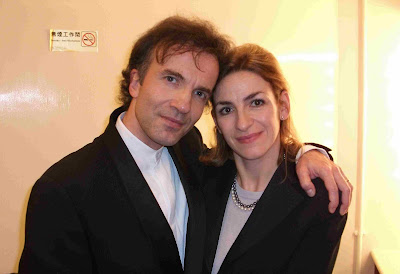 Vovka & Alessandra Ashkenazy
in Hong Kong.
VOVKA (VLADIMIR VLADIMIROVICH) ASHKENAZY is the concert pianist son of Vladimir and Thorunn Ashkenazy. His performing career has taken him to many parts of the world, including Southeast Asia performing with his father and brother Dimitri. This interview, conducted over telephone between Singapore and London, is in conjunction with the ASHKENAZY X 3 concert in Hong Kong.
You were born in Russia, raised in Iceland, educated in England, and presently reside in Switzerland. Which of these lands and cultures do you feel closest to?

That’s a difficult question. I spent one and a half years in Russia, five years in UK and ten years in Iceland. Iceland was my mother’s country and UK became culturally my adoptive country. A love for Russian music is however the greatest manifestation of my Russian heritage. I knew my Russian grandparents (the Ashkenazys) as a young adult but never learnt the Russian language. Having given up learning Russian as a child, I now regret about being so unenthusiastic about it! 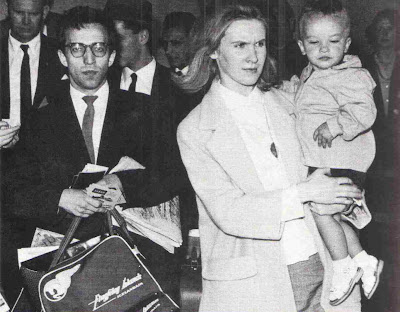 The young Ashkenazy family on tour.

Both your parents are accomplished musicians and pianists. What was it like to grow up in such a musical family? Did you receive your first music lessons from your parents? How much did this influence your decision to become a pianist?

It was both incredibly stimulating and intimidating! I had my first official piano lessons at a relatively old age of seven (my mother began at two!), and was taught for nine years by an Icelandic gentleman called Rögnvaldur Sigurjónsson. I would play for my father occasionally, and my mother would listen in and tell me off! She still has a very accurate ear! I love the piano and its repertoire, and always wanted to play the piano professionally. I guess you could say that the intimidation was an imaginary one.

Are there others in your family who are musicians?

All of us learnt music. My brother Dimitri is a professional clarinettist, and among the other siblings, two played the flute and one the piano. My wife Alessandra is a ballerina. We have two children; our son (15) will do quite well as a clarinettist, and our daughter (8) is a good ballerina and learns the cello.

Among your teachers was Sulamita Aronovsky (left), UK-based but schooled in the Russian tradition. Has her guidance and that of your family heritage conferred a “Russian-ness” to your music making?

I spent eight years at the Royal Northern College of Music in Manchester, including six years with the Lithuanian-born Sulamita Aronovsky. She was very much part of the Russian method, which integrates technical comfort with expressive playing. It is never a purely technical approach but one that describes the whole psychology of performing. It is part of the Russian system to be very methodical; very much to include rituals - certain moves and visualisations – and studying the score before deciding what to do before playing the music.

Did you take part in piano competitions?

The good advice I received was not to do competitions. Competitions could work badly both ways. If I won, people would say that’s because I was the son of the famous Vladimir Ashkenazy. And then there would be a loss of face if I did not do so well. Music is not a competition anyway. 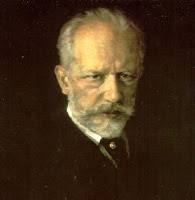 Tell us about your début with the London Symphony Orchestra in 1983 performing Tchaikovsky’s Piano Concerto No.1.

I was incredibly nervous, but managed to conquer the nerves and pulled it off. I enjoyed the performance and it was a memorable experience for me.

Your father was quoted to have been out of sympathy with Tchaik One. He recorded it once and never played it again.

I can understand that. It is not Tchaikovsky’s greatest work and the technical preparation required to play it really well do not always justify the results. The three Tchaikovsky concertos are more suitable for the “sportsman virtuoso”.

What are some of the other piano concertos you have performed?

You seem to favour collaborative performances, such as music for two pianos and chamber music, for your recordings projects. Do these give you more satisfaction than purely solo or concerto performances?

Yes, there is more pleasure, and I am more comfortable with the communication that takes place in chamber music. The piano still provides the main framework in piano trios, besides its less stressful than playing on your own. The chamber repertoire is quite amazing, especially the instrumental sonatas of Beethoven, Brahms and Rachmaninov’s Cello Sonata. If the right cellist comes along… 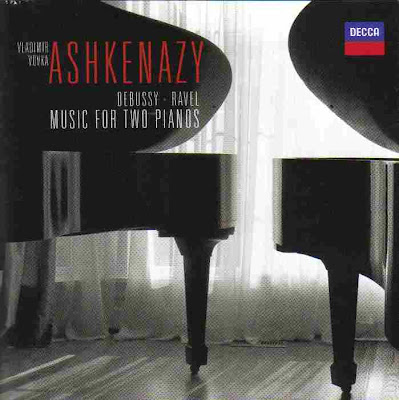 Your latest CD of 2-piano works by Debussy and Ravel on Decca (above) with your father was a great success. How did that come about?

It was a celebration in Hamburg in 2005 of the 125th anniversary of Steinway & Sons where we performed Ravel’s La Valse on two pianos. That received a very good reponse, and so we thought it natural to make a recording of this French repertoire. On the same disc, there is also a first recording of Debussy’s Jeux arranged by Jean-Efflam Bavouzet.

What further repertoire will you record in the future?

We will possibly be doing Russian repertoire, 2-piano music which my father did not do with André Previn. Among them, works by Medtner, Arensky, Scriabin’s Fantasy and Victor Babin’s transcription of Borodin’s Polovtsian Dances. 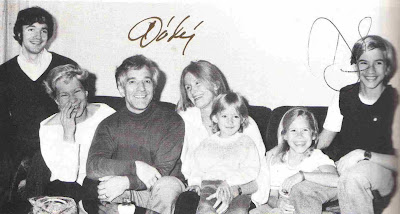 Ashkenazy family portrait from 1983.
Vovka is on the extreme left,
and Dimitri on extreme right.
What is like performing with your parents and brother Dimitri (the clarinettist)? Is there a sense of better musical understanding and closeness performing with them than with non-related artists? Besides family, do you have other favourite collaborators?

Certainly there is an underlying assumption that this makes for intuitive music making. We do occasionally discuss a bit about the music, but not that much unlike string quartets where there are sometimes four different points of view. Mostly we have the same ideas, with minor changes in details, and this saves a lot of time. Among my favourite collaborators is Milan Rericha, principal clarinettist of the Czech Philharmonic Orchestra, who also happens to be my son’s clarinet teacher. As with chamber music among friends, we usually organise things in a haphazard fashion!

Tell us about your forthcoming humanitarian work involving the Concerts for Peace in Southeast Asia.

There will be a cultural exchange organised by the International Peace Foundation, where my father, Dimka (Dimitri) and I get to meet young musicians in Cambodia and the Philippines to discuss about music and music careers. We will also giving concerts in Phnom Penh and Manila. I was told there will be a Yamaha and Boston in Phnom Penh, probably the only two grand pianos in Cambodia!

The programme for the Ashkenazys’ concerts in Cambodia, Philippines and Hong Kong is as follows:

The Hong Kong concert on 12 March 2010 – Ashkenazy x 3 – is presented by The Chopin Society of Hong Kong.
Family Photos from Ashkenazy/ Parrott Beyond Frontiers
Posted by Chang Tou Liang at 09:09

Dear Vovka Ashkenazy. When was it that you gave a concert in Gistrup church Denmark?.I think it was in the beginning af the eigties I was told that you gave this concert because you wife came from Gistrup, Denmark. Am I right?. Thank you in advance

Yes, I did perform in Gistrup in the 1980s, when I was married to my first wife, who is Danish.

Dear Ashkenazy.
I am very glad to hear from you. My wife and I had an exceptional experience and I have never forgot this evening. Many of my friends did not believe me that such a famous artist would play in our small town. Particular the last piece was like the stardust fall from heaven.
So thank you very much again. Forgive my spelling.
Your admirer.
Ole kristensen.
Bøgeskrænten 10, 9280 Storvorde.
Tlf 27 1 63 31
Mail: okhandicapudstyr@gmail.com

Dear Ashkenazy.
Thank you ery much for your mail. I am glad to tell you that my wife and I had a delightful evening which I never have forgot. Many of my friends do not believe me that you have played in our small town. Particular the last piece was like stardust fall from heaven. Your answer is like a chrismas present for my. I wish you another time could come and play for us.
Best regards
Ole Kristensen.
Bøgeskrænten 10. 9280 Storvorde.
Tel. 27 11 63 31