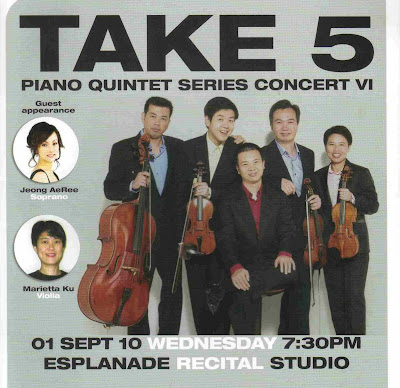 When a piano quintet dedicated to performing every repertory piano quintet reaches its sixth concert, familiarity becomes short in supply. Pleasant surprise, thus, to find a sold-out house for an evening of rare French works, all receiving first Singapore performances.

Jean Francaix’s (left) Eight Bagatelles opened the evening. Hold your breath and you will miss some of these miniatures, written for various combinations of strings with piano. Insouciant charm, quiet solemnity and dance-like playfulness inhabit these aphorisms, serving as a piquantly flavoured palate-tickler.

Jeong’s dreamily sensuous voice mused yearningly about love lost, merging seamlessly with the dark and undulating music imbued with Wagnerian echoes. The allusions to the wind left one with little doubt that love is but a transient and elusive quality.

For extended stretches, the music featured Chan and Lim as a violin-piano duo, reliving the sonatas of Franck and Fauré. However the use of pivotal motifs, such as the D-A-E that so emphatically opened the work, and symphonic nature of the accompaniment owed more to Wagnerian influences.

Light and shade alternated, with the sunny Mediterranean sicilienne of the second movement sharply contrasted with the dirge-like bleakness in the third. In the latter, the ensemble drove relentlessly, achieving an intensity that was unremitting and harrowing. Overwrought emotions, bottled up and ready to erupt, were all but released in a finale of sheer excitement and ecstasy.

Soprano Jeong returned for a haunting encore in Ravel’s Kaddisch, but the memory of Les Six holding their own in the nearly 50-minute Chausson was the abiding memory, capping one of the great performances of the year.
Posted by Chang Tou Liang at 10:41