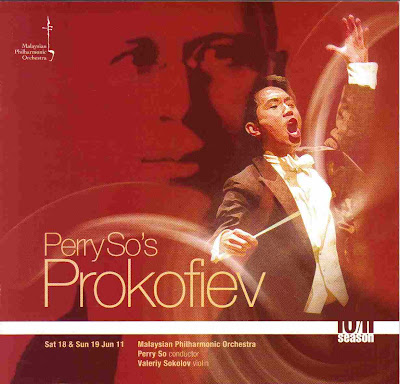 Make no mistake, the Malaysian Philharmonic Orchestra (MPO) is a class act. And what a pleasure it is to experience the 13-year-old orchestra in his home, the magnificent Dewan Filharmonik Petronas (DFP), once the envy of Singaporeans in those seemingly long pre-Esplanade years. The MPO still reinforces its “dress up” code for men, which means jackets/coats and tie or long sleeve National costume for men, and that isn’t really a bad thing. When you are required to dress better than you normally would attending church service, chances are you would behave better. Which is why the infamous incident of schoolboys thrashing a SSO concert would never happen in KL, at least not in DFP.

The concert this weekend was entitled “Perry So’s Prokofiev”. So what’s so special about So and his relationship with Prokofiev? “Gergiev’s Prokofiev” or “Petrenko’s Prokofiev” might be perfectly understandable for a concert of all-Russian music, if they were conducting. But who is Perry So? I thought “The Heart of Russia” or “Russian Soul” might have worked better, but the proof of the pudding is in its eating.

The concert began with Alexander Mosolov’s (1900-1973) only work in the active orchestral repertoire, The Iron Foundry (or just Zavod), four minutes of white noise representing the dehumanising 1920s industrialisation of the Soviet Union. Grinding dissonances and ostinatos ruled the waves, and its one claim to fame – the use of a large metal sheet beaten by a hammer. There it hung unapologetically in the percussion section and employed to devastating effect. The short work also showed Mosolov could possibly churn out effective film music.

The concerto of the evening was Tchaikovsky’s Violin Concerto, played by the Ukrainian Valeriy Sokolov. He is a big guy with a sound to match. Having said that, the performance, the third to be heard within the space of a month, was decidedly middle-of-the-road. It was definitely competent, without being too distinctive in a good or bad way. There were lovely moments for sure, and he did attempt to lovingly linger in the Canzonetta and the slower middle section of the finale, and brought out the fireworks to close. There were multiple curtain calls, and the audience even halted their applause in anticipation of an encore, and all he did was wave his hands, as if to say “That’s all folks!” Bizarre. Verdict: Definitely better than Lara St John (with the Singapore National Youth Orchestra), but trails behind Midori (with the Singapore Symphony Orchestra). 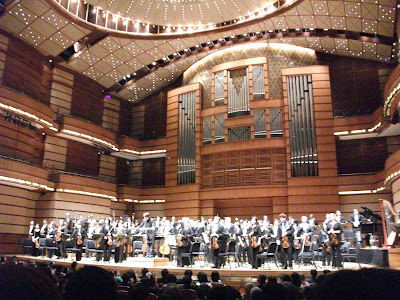 The true mettle of the MPO came to the fore for the second half’s Prokofiev Fifth Symphony in B flat major (Op.100). The young guest conductor Perry So, Associate Conductor of the Hong Kong Philharmonic and still in his 20s, was the winner of the International Prokofiev Conducting Competition (St Petersburg) in 2008, hence the significance of the unusual title. The MPO may be hailed as a great band on the strength of this performance, which had everything one could have desired and displayed every section of the orchestra to their advantage. The brass was particularly good, and rose to the occasion every time it was called upon. The gigantic climax built up towards the end of the first movement was a moment not for faint hearts, as the orchestra went for the jugular and did not let go.

The trenchant wit of the Scherzo, full of acid spewed and sniping asides, was brilliantly communicated as was the droll slow movement and its poignant sentimentality. Of the orchestral soloists, clarinettist Marcel Luxen was the easy standout, his solos were beautifully shaped and well projected. The machine gun rapid fire of the finale was engaged at full throttle, as the music rumbled ever so inexorably to its triumphant close. There is a section towards the end when the volume dips suddenly so that the complex turning of the wheels and gears of the war is heard unchallenged – played with much finesse and relish - was indicative of this orchestra’s virtuosity. Conductor So, whose sympathy, keen and taut conception of the work as a whole, helped make this brilliant orchestra shine. One looks forward to his visit to the SSO soon.

For this regular concertgoer, there were also other reasons to feel much at home. The excellent programme notes in a smart booklet (which cost RM 7 by the way) were written by the inimitable Marc Rochester (now resident in Singapore); SSO’s first violin Seow Jin Chong was free-lancing, SSO’s former cellist Elizabeth Tan (a Yong Siew Toh alumnus) is now a proud member of the MPO, as is former SSO librarian Khor Chin Yang, both Malaysians returning home to serve national musical service. Simply put, No trip to Kuala Lumpur is complete without attending a concert by the Malaysian Philharmonic. 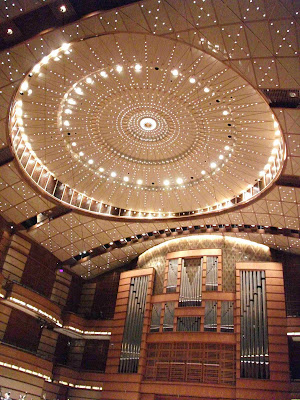 The magnificent organ and ceiling of Dewan Filharmonik Petronas.
Posted by Chang Tou Liang at 12:22