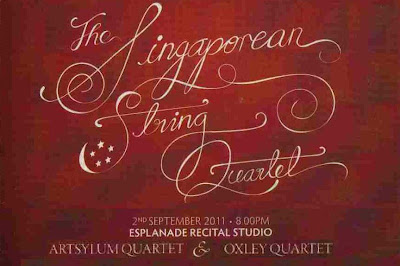 This review was published in The Straits Times on 5 September 2011 with the title "Salute to composers".

While the notion of Singaporean string quartets may not be immediately appealing, reality threw up a most fascinating concert featuring seven very individual Singaporean voices. However one may be excused for being somewhat confused to find three women in black lying on the floor and babbling in Chinese, Malay and Tamil, as a tape of ambient noise played on.

That was the opening gambit, the World Premiere of Weird Witches (2011) by Jun Zubillaga-Pow, a play on the opening of Shakespeare’s Macbeth with a quasi-political message. But where were the strings?

The mystery was solved when two quartet groups made the stage to perform two quartets each. The Artsylum Quartet (below), led by violinist Ng Wei Ping, performed Kelly Tang’s String Quartet (1990, revised 2011) and Jeremiah Li’s Three Korean Scenes (2006). Both were early works in their creative outputs but revealed coherent thoughts and much self-belief.

Tang’s concentrated single-movement distilled influences of the Second Viennese School into a tonal canvas without losing sight of its main thematic thrusts. A worthy academic exercise, quite different from the freedom of Li’s conjuring up impressions of his Korean memories – morning mists and birdsong, a frenetic train ride and the reassuring smell of coffee! The four young Singaporean players brought out the contrasts well.

The slightly more mature Oxley Quartet (below) is formed by a Singaporean, Australian, German and Briton. They were entrusted with Phoon Yew Tien’s String Quartet (1980) and Benjamin Lim’s Through The Glass (2007) and Porcelain Harlequin (2008). It was a pleasure to see and hear the foreign talent confidently handle Phoon’s Chinese-inflected score with such verve, and later put a gloss on Lim’s counterpoint and scherzo-writing.

Both quartets were united and joined by bassist Sanche Jagatheesan for two further works. Lee Yuk Chuan’s Lingzhi Capriccio was the earliest piece, essentially programmatic Chinese music untouched by Western idioms, written for his landmark Chinese opera of 1973. The versatility of the medium saw the pendulum swinging over to the late Leong Yoon Pin’s Largo-Vivace (1982), arguably the evening’s most modern sounding work.

If there was anyone who could transform a Hokkien song into ostinatos that Bartok might have been proud of, it had to be Leong. This salute to our composing legends and emerging creators was a timely and vital one. If only it had a wider audience to share in its glorious diversity.
Posted by Chang Tou Liang at 10:22

The composer Jun Zubillaga-Pow has revealed that the "ambient noise" in his Weird Witches was a tape of a string quartet but slowed down to a speed where it is hardly recognisable. So that's where the strings were!