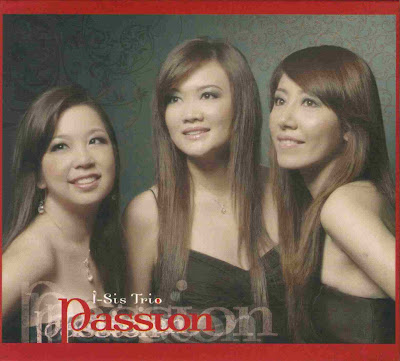 The I-Sis Trio, formed by harpist Katryna Tan, violinist Cindy Yan and cellist Natasha Liu, is ’s premier harp ensemble. Its début recording Passion, like the performers themselves, is a glamourous affair. Strong on entertaining rather than purveying seriousness, there is a decidedly Latino slant to the programme. There are three tangos, Astor Piazzolla’s Primavera Porteña (Spring in Buenos Aires) and Oblivion, and Carlos Gardel’s Por Una Cabeza, as varied in character and mood as the art form itself. The Cuban Ernesto Lecuona’s Malagueña and Italian film composer Ennio Morricone’s Cinema Paradiso add to the alternately heady and sultry atmosphere.

While most pieces are in arrangements by the trio, there are several original works from local composers which find a committed advocacy. Phang Kok Jun’s Reminisce is classy Chinese mood music, with the harp simulating the guzheng, contrasted with the bluesy sentimentality of In Case A Goodbye and more impressionist shades of Chloeitchka, both by Fung Chern Hwei. Unfortunately, biographies of these young composers have not been included,. Looking beyond the obvious glitz, there is seriously good music-making to be found here. 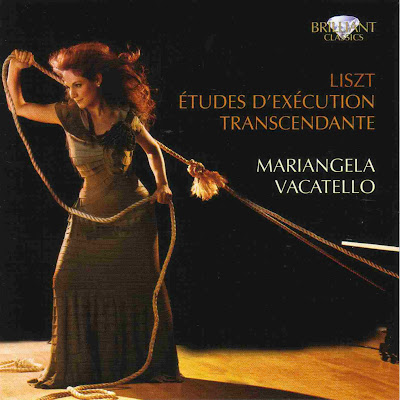 The cover of the album says it all, an Amazonian woman hauling a grand piano with a rope. That is the young Italian pianist Mariangela Vacatello, finalist at the 2009 Van Cliburn International Piano Competition, and only the third woman to have recorded Liszt’s twelve finger-busting Transcendental Études in recent times. Trying not to sound sexist-misogynist, this is a man’s work, but Vacatello clearly has the chops. From the minute-long Preludio, which sweeps the entire length of the keyboard for starters, to the Paganini-inspired Molto Vivace second study, there is some amazing pianism taking place.

Prestidigitation and power may be the pre-requisites but there are also tender moments which benefit from a woman’s touch, such as in the gentle Paysage and nostalgic Ricordanza. Leaving out the issue of gender, one still needs feathery lightness and rapier reflexes for a silky smooth Feux Follets, that most nimble of showpieces. Or oodles of passion for an assault on the tenth study with the marking Allegro Agitato Molto, and a sustained crescendo to bring Harmonies Du Soir to glorious fruition. Vacatello has all these and more, which makes this budget-price release an unmitigated success.