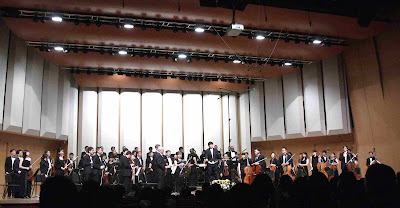 This review was published in The Straits Times on 22 May 2012 with the title "Bright stars".

Fact: most of Singapore’s top young musical talents get their first break by playing a concerto with the Braddell Heights Symphony Orchestra. This evening’s concert was a veritable showcase of our brightest new names, a legacy stemming from the vision and largesse of the orchestra’s out-going Music Director Yan Yin Wing in his final concert after 23 years at its helm.

First up was 11-year-old violinist Wu Shuang who played three movements from Edouard Lalo’s Symphonie Espagnole. One is immediately struck by her confidence and poise, almost nonchalant to the work’s myriad technical difficulties. She brought out a big robust tone, undaunted by and even transcending the often uneven orchestral accompaniment.

A good start became better with 18-year-old Chua Shan Jee in Saint-Saens’s Second Piano Concerto, opening with a Bachian cadenza which was delivered with both power and purpose. The frothy frivolities of the second and third movements found her in scintillating form, trading humour and high jinks amid the rapid cut and thrust exchanges with the orchestra all through to its gushy conclusion.

All this served as a prelude to the miracle of Elvina Sung-Eun Auh (above), the 12-year-old presently studying at the Yehudi Menuhin School. Winner of the Goh Soon Tioe Outstanding Performer Award at last year’s National Violin Competition, the unassuming and serious-looking girl looked and sounded like having lived several musical incarnations. Hers was not the playing of someone merely well taught or blessed with a prodigious technique, but that of an “old soul” bestowed with depth, maturity and wisdom of the ages.

Had she communed with the spirits of Menuhin, Enesco or Ysaye, to have been able to shape the second subject in Vieuxtemps’s Fifth Violin Concerto with such natural authority and matchless beauty?  It seemed like sacrilege to breathe as she whole-heartedly launched into the cadenza, as if time stool still for her benediction of the piece. Her encore, a Bach Sarabande, was the perfect send-off.

A celebration of sorts, the concert began brassily with Sibelius’s Finlandia and closed in the jingoistic fervour of Elgar’s Pomp and Circumstance March No.1. There was a glowing spoken tribute by conductor designate Adrian Tan to the soft-spoken Yan’s dedication and achievements over the years. The latter was speechless, but let his music do the talking. The Elgar was encored, and needless to say, it sounded much better the second time around.