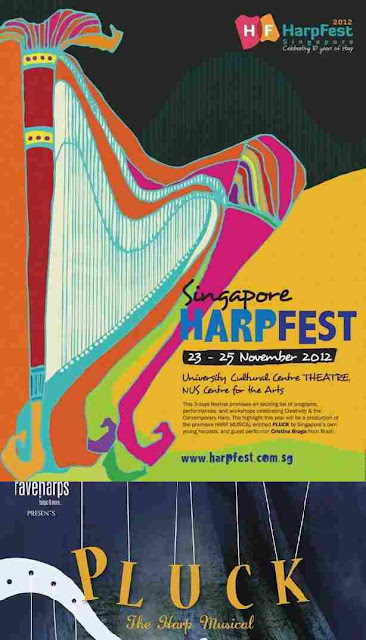 This review was published in The Straits Times on 26 November 2012 with the title "An enjoyable outing where everyine wins".

Sometime in the early 1980s, there was an article in The Straits Times which announced that the Singapore Symphony Orchestra had just bought a new harp, thus making a grand total of two performing harps in the whole of Singapore. So it might be considered progress when this concert featured no less than thirty harps of different sizes on stage.

Pluck is the brainchild of Seremban-born harpist Katryna Tan, winner of the Young Artist Award in 2005. This harp ensemble concert featuring young harpists of wide-ranging abilities was conceived in the form of a musical with a story catered to mostly primary school children. It centred on a sad kingdom of harpists, which had lost its musical voice, because its muse - the harp fairy - had been kidnapped by the evil kingdom of bowed strings.

Whether the friendly jibe at violinists, violists and cellists was a Freudian admission to an inferiority complex remains to be debated, but it gave many rising harp talents a chance to be heard. The protagonists were young orphan Pluck (played by 7–year-old Chloe Lam), her Guardian (Tatyana Philips), the King and Queen (a rare male harpist in teenager Lee Yun Chai and the slightly older Nicolette Chin), the harp fairy (6-year-old Isabel Ho) and their friends. 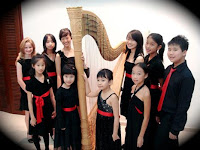 They performed in various combinations and also sang, all of which was accomplished admirably and totally from memory. Members of Rave Harpers, Singapore’s leading harp ensemble, chipped in to perform various dances from Tchaikovsky’s Nutcracker Suite, quite apt given the festive season. Original music by Eric Watson (Pluck Theme Song and Golden Orb), Phang Kok Jun (Sandy Road) and Philips (Don’t Give Up) also added local context and flavour to the melange.

A second half which saw the children comb corners of the world for the magic spell was the excuse for further music from Ireland (Danny Boy), Austria (Johann Strauss’s Tales from the Vienna Woods), Argentina (Piazzolla’s Libertango), Indonesia (Getaran Jiwa) and China (Spring Blossom On Moonlit River). Aided by Malaysia’s Cempaka Poise Harps and ubiquitous storyteller William Ledbetter, the proceedings took on the air of a variety show which ran close to two and a half hours.

The bowed strings of Fu Chun String Ensemble, dressed in all black and led by violinist Cindy Yan, were not to be outdone in its confident performances of Vivaldi’s Summer and Pascual Narro’s Espana Cani. In the end, the antagonists were not so much defeated but befriended by their neighbourly harpists. So everybody wins.

If anything, this enjoyable and even enchanting outing was both a reminder of the innocence of youth and how far harpists have come in a Singapore musical society overpopulated by pianists and violinists.