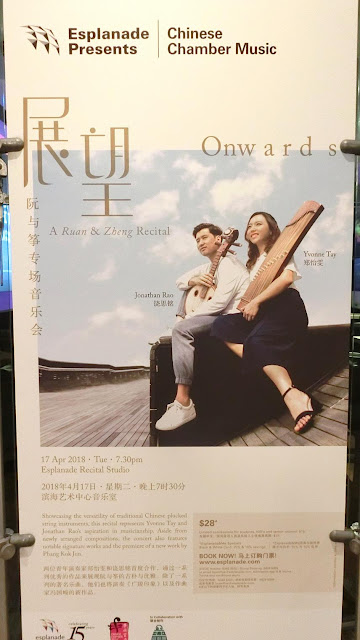 Contrary to what some may think, there is not much repertoire that involves the ruan and guzheng, both very popular traditional Chinese instruments, as a duet. Thinking along the same lines, there are also not many works for guitar and harp together in the Western classical canon. This unusual chamber concert paired both plucked instruments, performed by Jonathan Rao on zhongruan and Yvonne Tay on guzheng, both exciting young soloists and members of the highly progressive Ding Yi Music Company. 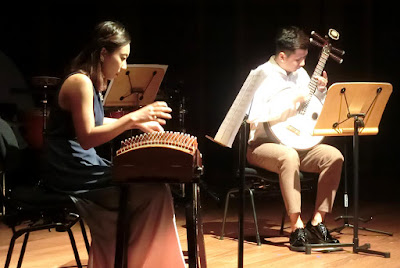 The duo opened the evening's programme with Zheng Zhe Cheng's Song Of Li, which is a contemporary work that keenly contrasts the timbres of both instruments. Inspired by tribal music of the Li indigenous people, the play of dissonances and microtonal music lent a piquant feel to the music. Straight off, the ensemble work of both players were excellent. 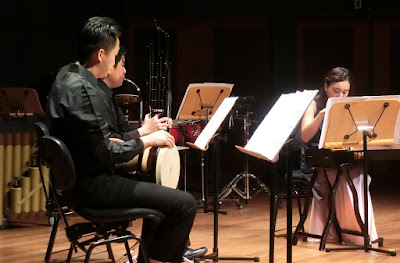 Robert Zollitsch's Boat Against The Current pitted guzheng with sheng (Soh Swee Kiat) and percussion (Low Yik Hang), yet another interesting combination of instruments. As its title suggests, there is much vigour and rhythmic interest in the music, aided by side-drum and cymbal. There was stillness in its central section before shifting gears for a faster and animated close. 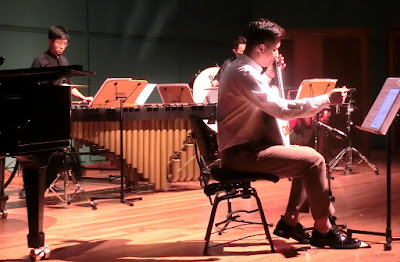 Just as unusual was Dong Li Qiang's Scattered Shadows, scored for ruan and percussion (with Cheong Kah Yiong joining Low). Another modern sounding piece, the mellowness of the marimba was well-contrasted with the more incisive ruan. The fine interplay between the three players ensured an exciting close to this highly rhythmic piece.

Perhaps the most emotional work of the evening was Wang Dan Hong's Ru Shi, a guzheng concerto with Yvonne accompanied on piano by Clarence Lee. This was the same work performed at last week's concert with the NAFA Chinese Orchestra, and it was no less stirring this time around. Based on film music about the life of a legendary courtesan, its vicissitudes drew both a virtuosic and passionate response from the soloist - she was literally in tears by its end. 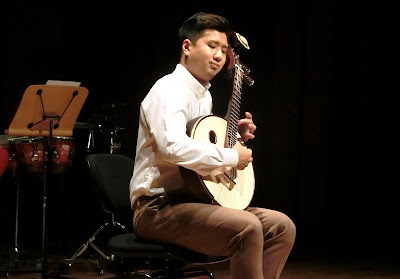 Zero Limits by Chen Ting-Fang was conceived to challenge the performer in all aspects of ruan technique and it worked brilliantly. Beginning with an ambling pace, the work gradually accelerated and built up to a frenzied tempo, all the way to an explosive finish. This concertante work was also accompanied by Clarence Lee on piano. 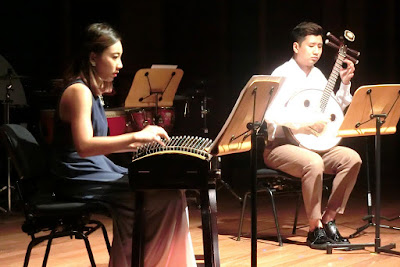 The most traditional work was Pan I-Tung and Kuo Min-Chin's Ambience of Guang Ling San, based on an ancient melody. This was music for meditation and contemplation, with both instruments in unison for much of its course. There was some doubling and simple accompaniment for what was essentially a monody, and it was also interesting to hear each instrument for its own unique qualities. 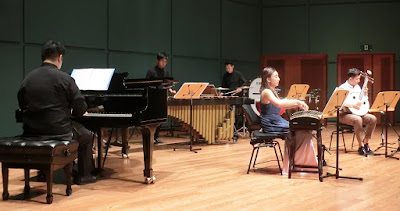 The final work was specially commissioned for this concert, a world premiere of Phang Kok Jun's Onwards. One of the most prolific local young composers, Phang comfortably melds Chinese, Western and popular idioms to excellent effect, in this case a quintet for ruan, guzheng, piano and percussion. The music has a popular (and populist) slant, with a penchant for nostalgia.

It is this backward glance that aspired to spur and guide the future, which begs the question: what does the future hold for traditional Chinese instruments? Given the sheer virtuosity and unquenchable spirit displayed by these young musicians, the sky's the limit, and onwards (to borrow the title of the concert) they march. 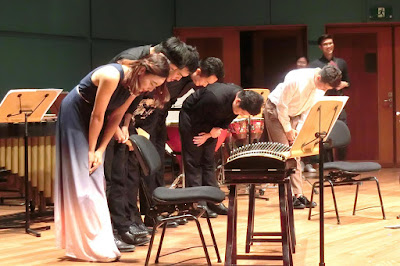