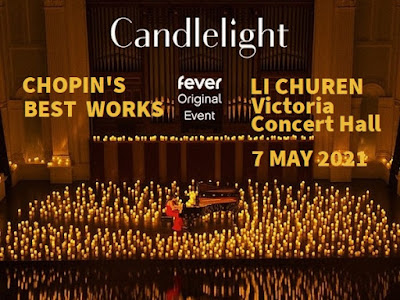 Whatever one might think of Fever’s Candlelight concerts, with its gimmicky placements of hundreds of smokeless electronic candles in concert venues, it has at least got the choice of performers right. The Vivaldi Four Seasons concerts engaged the more-than-acceptable Vocalise Quartet with a quite excellent Jocelyn Ng playing the violin solos. The bar was further raised with pianist Li Churen helming their Chopin recitals, unimaginatively called Chopin’s Best Works. Corny title aside, this Yong Siew Toh Conservatory alumnus with further degrees from Yale and Cambridge gave a best account possible for an hour of Chopin’s piano music.

Were these really Chopin’s best works? One might argue that moot point, but there was little denying the selections were fair representations of each genre of piano pieces which Chopin indulged in. There was one each of the nocturnes, waltzes, scherzos, impromptus, études, préludes and polonaises, but no mazurkas, ballades, rondos or sonata movements, but that is already a lot to pack in within 60 minutes. 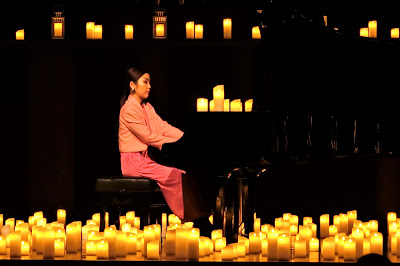 To open with the Nocturne in E flat major (Op.9 No.2) was a no-brainer. Is there a more evocative work than this to convey the romance and mystique of night? Surrounded by candles, Li’s reading was one of tonal lustre and warmth, aided by judicious rubato and mastery of ornamentations. After a short address, the salon charms of Waltz in C sharp minor (Op.64 No.2, companion to the notorious “Minute” Waltz) was followed by a sequence in E major. 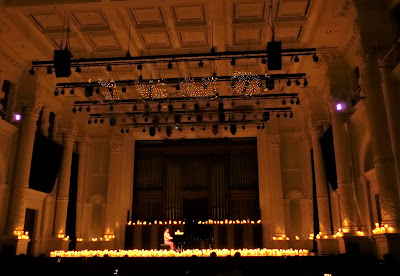 Scherzo No.4 (Op.54) was an unexpected choice, the trickiest and most elusive of the four Scherzi, but Li nailed it with a combination of nimble fingers and mercurial wit. The popular “Tristesse” Étude in E major (Op.10 No.3) evinced tenderness before the little caprice of its central section gave way to a thunderous cascade in the thorniest and technically most difficult passage of all (completed avoided by the likes of Richard Clayderman). I am sorry even to bring up Clayderman, but Li totally showed that charlatan up, and everyone should know who is the real pianist. 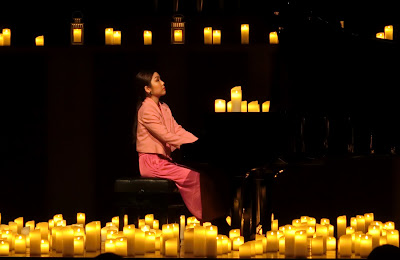 The next two works were enharmonically related: Fantasie-Impromptu in C sharp minor (Op.66) and Prélude in D flat major (Op.28 No.15). Digital brilliance alternating with pure lyricism reigned in the former while the latter reminded this listener less of falling raindrops but rather the gentle and constant flickering of candlelight. Little had I expected this outcome, but the visual element provided by the evening’s setting cannot be underestimated. The formal Chopin programme closed with Andante Spianato & Grande Polonaise Brillante (Op.22), the longest work on show. The nocturne-like introduction was beautifully voiced, later giving way to the vigorous dance of Polish nobility, coruscating from start to finish. 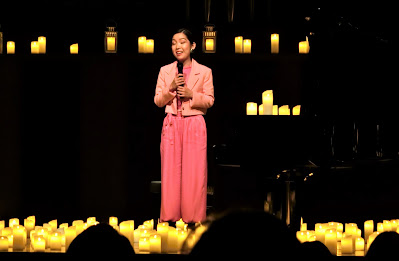 It was a great way to end, and Churen’s encore, an original work called Llama’s Land – beginning with a gentle waltz but gradually building up into a lively fantasy – showed her to be an excellent composer as well. Some years ago, I referred to her in a review as the “epitome of poise and polish”. Now let me now add “passion” to that list of superlatives. 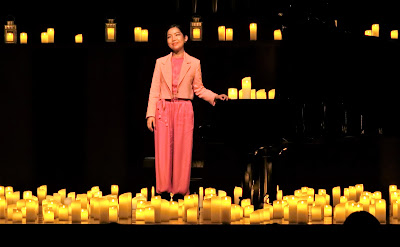 Li Churen will perform at the Singapore International Piano Festival on Friday 4 June at Victoria Concert Hall, playing the music of Schumann, Ravel, George Crumb and an original composition inspired by J.S.Bach. Be sure not to miss it.