BEFORE LIFE AND AFTER

ECHOES OF FIRE AND WATER

An edited version of this review was published in The Straits Times on 16 June 2021 with the title "Emotional healing through music".

The heightened measures of the present circuit breaker could not have come at a worse time for the Singapore International Festival of Arts (SIFA). Limited audiences were further restricted to 50 persons per event, and live shows of the Compassion series of chamber concerts involving singers and wind players had to be cancelled. These were, however, recorded and made available for viewing on demand, a reminder that art and artists provide solace and comfort, and will ultimately survive adversity. 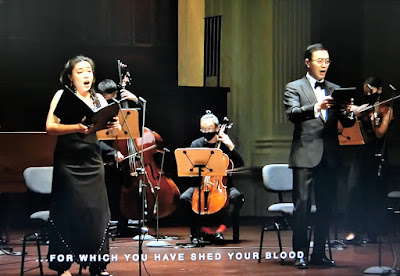 The world-weariness in Ich Habe Genug (I Have Enough, BWV.82) was poignantly portrayed by soprano Joyce Lee Tung while bass-baritone John Lee manly broached the subject of sacrifice in Ich Will Den Kreuzstab Gerne Tragen (I Shall Gladly Bear The Cross, BWV.56). Both singers were united for Ach Gott Wie Manches Herzeleid (Oh God How Much Heartache, BWV.58), which closed the concert with a spirit of blessed optimism.

Art songs of three 20th century composers, Frenchmen Maurice Ravel and Francis Poulenc, and Briton Benjamin Britten were the subject of Before Life And After. Tenor Jonathan Charles Tay ran the full gamut of emotions in Britten’s Winter Words, eight settings of Thomas Hardy poems, encompassing pastoral innocence and seasonal bleakness. Its culmination was the titular final song, which pondered what came before “a time there was... when none suffered sickness, love or loss”.

The French songs from soprano Felicia Teo Kaixin were more lyrical but no less gripping, such as Ravel’s melismatic Kaddish (a Hebrew song of mourning) and Poulenc’s deceptively congenial Poems of Louis Aragon, with words by a famed Surrealist and Communist. In between groups of songs, pianist Jonathan Shin performed movements from Ravel’s Le Tombeau de Couperin, each dedicated to a friend killed in the First World War. 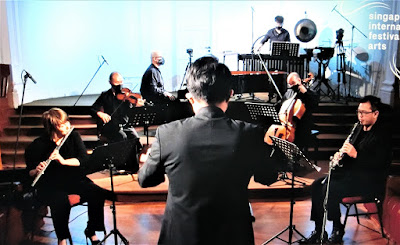 Newly-formed new music group Ensemble Aequilibrium’s eclectic programme of 20th and 21st century works had one thing in common: uneasy calm that comes before impending doom and the aftermath that follows. Japanese icon Toru Takemitsu’s Rain Spell and Singaporean Young Artist Award Recipient Chen Zhangyi’s Walks On Water set the tone, with the fluid realm providing more than a modicum of sustenance and comfort. The atmosphere conjured was haunting and dissonances paradoxically soothing, especially with the use of flute, harp and piano.

This continued into Finnish composer Kaija Saariaho’s Cendres (Ashes), a diametrically opposed scenario of consumption by fire. Volume and tempo were upped but stopped short of outright violence, as if stilled by the warmth of embers. The main work was American avant-gardeist George Crumb’s Eleven Echoes of Autumn, which employed only four instruments: piano (with “string piano” techniques), viola, flute and clarinet. This apparent economy however translated to a myriad of tonal effects, its very short connected movements suggesting that “less is more”. 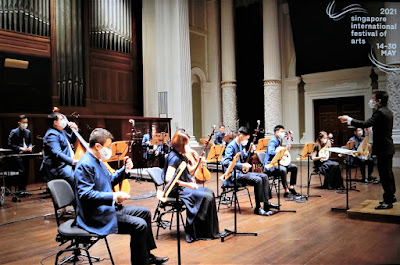 Healing Rhapsody was the offering of Ding Yi Music Company, conducted by Quek Ling Kiong, in response to civilisation’s perpetual cycles of crisis and rehabilitation over the ages. Joyce Koh’s stark but dynamic Isskimmer was a reflection of natural beauty as viewed in ice formations. In Benjamin Lim Yi’s Memory, liuqin, cello and sheng starred as concertante instruments, with its rich melodic content signifying nostalgia and yearning.

Buddhist precepts dominated the rest of the programme, with Chow Jun Yi’s serene and lushly-scored Zen Thoughts a meditation on impermanence, the current strife being just a passing phase. Luo Mai Shuo’s specially-commissioned Compassion, which lent its title to the entire chamber series, received its world premiere. Sounds of nature were recreated in its quiet introduction, the music then blossoming into a hope that humanity aspires to kindness and ultimately love. Finally, the vigourous chant-like closing pages of Wan Yun Fei’s Bodhi, the embodiment of enlightenment, provided an upbeat end to a concert that promised healing, and delivered.