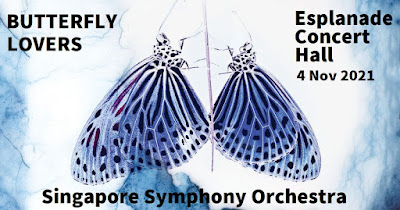 This review was published by The Straits Times on 10 November 2021 with the title "Love story tugs at heartstrings".

It is not often that the Singapore Symphony Orchestra performs concerts entirely devoted to 20th century and contemporary Asian music. These are notable events, especially when works by two Singaporean composers were also receiving SSO premieres.

SSO’s first Composer-in-Residence and Cultural Medallion recipient Leong Yoon Pin’s Largo and Vivace for strings (1982) opened the evening on a sombre note. While not strictly atonal, his idiom was astringent, reminiscent of twentieth century greats Bartok and Shostakovich. Conductor Joshua Tan skillfully guided the ensemble, with string textures coming through with leanness and clarity. If the Largo were a portrait of depression, the brief ensuing Vivace projected an agitated face of neurosis.

Chen Gang and He Zhan Hao’s evergreen Butterfly Lovers Concerto (1958) was the obvious box-office draw, which saw award-winning Singaporean violinist Loh Jun Hong helming the solo part. His voluminous tone was the highlight in this programmatic fantasy, more a tone poem than concerto, about the ill-fated lovers of Chinese folklore. 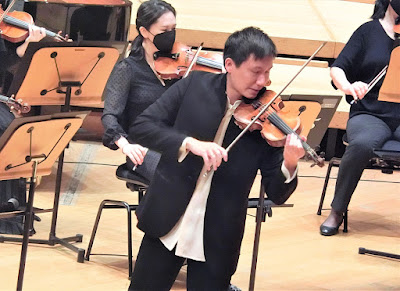 Unafraid to bare heart on sleeve, he pulled out all stops in this tear-jerker, also exercising wide portamenti or slides which relived Chinese opera-singing and weeping erhus. His duet with orchestral cellist Yu Jing provided moments of genuine intimacy in a work where vivid story-telling and sentimentality were strong suits. 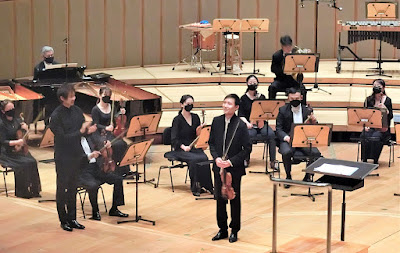 Ho Chee Kong’s double concerto for violin and cello entitled There And Back (2019) has no such programmatic pretensions. Before it began, SSO Principal Cellist Ng Pei-Sian dedicated the performance to his recently departed first cello teacher Barbara Yelland. Violinist Chan Yoong Han opened with an impassioned solo, followed by Ng himself with no less intensity, both accompanied by Mark Suter’s slow and ominous beat on bass drum. 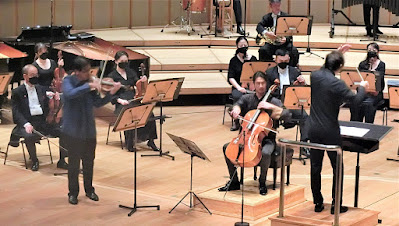 The funereal pace strongly suggested a requiem in procession. The tempo then picked up with both soloists engaged in a neck-and-neck race, the music now resembling a cinematic score depicting broad vistas and the vast outback. The alternating slow and fast sections proved both unsettling yet exciting, and the duel between instruments absorbing and exhausting.

That had to end sometime, doing so with the orchestra silenced, and both violin and cello in quiet beatific unison. With bass drum taps remaining an idée fixe, the work may be considered a metaphorical epic journey of life itself. Ending as it began, with ups and downs in between, it represented a perpetual cycle from “ashes to ashes, and dust to dust”. 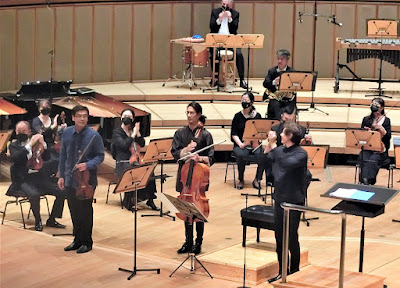 First performed by violinist Siow Lee-Chin and cellist Qin Li-Wei with the Singapore Chinese Orchestra led by Yeh Tsung, it made an instant impact and named best new work of 2019 in the pages of Life! This evening’s take was no less moving.

All three of the evening’s soloists were united for an encore designed to cheer up the audience. That turned out to be Alexander Oon’s arrangement of Astor Piazzolla’s Oblivion, the Argentine composer’s most melancholic tango of all. Ironically, it made for a truly fitting send-off. 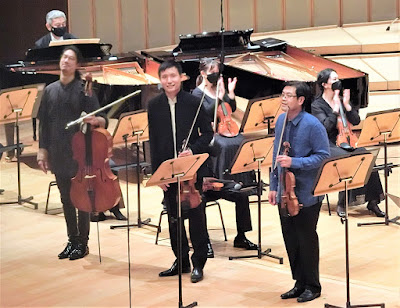