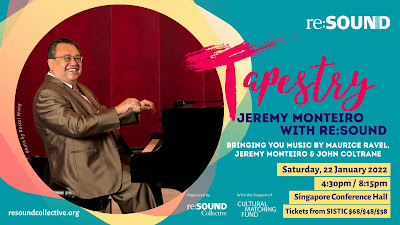 This review was published in The Straits Times on 26 January 2022 with the title "Jazz meets classical as Jeremy Monteiro plays with re:Sound".

Singaporean jazz pianist and Cultural Medallion recipient Jeremy Monteiro’s collaborations with local Western classical groups have been too few and far in between. This has largely to do with the paucity of repertoire that successfully merges classical forms with the art of jazz improvisation. Hopefully this will change as more of Monteiro’s own compositions become accepted as concert works, the very subject of this showcase in collaboration with crack chamber ensemble re:Sound.

One often regards the likes of George Gershwin, Duke Ellington, Friedrich Gulda and Nikolai Kapustin as composers who have successfully bridged the classical and jazz divide. Now add Monteiro to this illustrious ensemble.

The 80-minute long concert opened with two movements from French composer Maurice Ravel’s String Quartet in an arrangement by Rudolf Barshai for string orchestra. Both movements have in common strong rhythmic elements and modal tunes often encountered in folk music and jazz idioms. Ravel was known to have dabbled in the blues, much to great popular acclaim.

This vigorous start paved the way for Monteiro’s own compositions, displaying his versatility and virtuosity in equal measure. Directing from the keyboard, his Overture No.2, titled Through The Golden Doors, was a C major homage to Mozart in a form of a set of theme and variations.

Falling In Love Again was written in the popular vein, with much room for improvisations by flautist Rit Xu and saxophonist Sean Hong Wei. The slow and reflective Nostalgia brought out Slavic melancholy, beginning like a Chopin nocturne and closing like a Rachmaninov romance accompanied by lush strings. 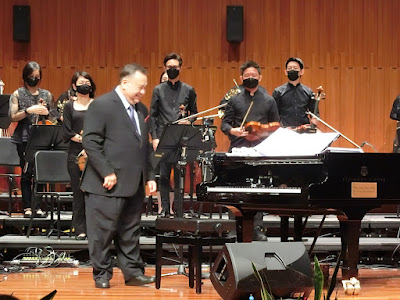 Monteiro joked that it has become his civic duty to write works inspired by the births of his friends’ children. Thus Waltz For Amelia and Elora’s Theme were conceived. The former is a happy and insouciant dance, while the latter demonstrated the master tunesmith in Monteiro, by using a simple melody and transforming it into something rather special.

Also memorable was From Paris To Segré, a railway piece built upon piano ostinatos, generating melody and inexorable motion in the best tradition of train music by Villa-Lobos and Billy Mayerl. Through all this, the players of re:Sound supported Monteiro’s own jazz band (which also included double bass, drums, Latin percussion and tabla) to the hilt. 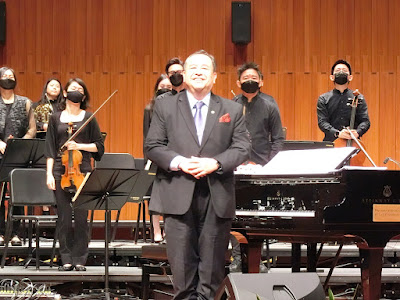 To prove that the orchestra was indispensable to the enterprise, arranger Germaine Goh’s orchestration of John Coltrane’s Naima turned a sultry saxophone melody into a full-blown symphonic poem. There were solos from French horn and trumpet, while strings and timpani made their presence keenly felt. On piano, Monteiro experimented on harp-like textures and even spread out tone clusters.

For the record, the other arrangers of works were Jordan Wei and Scott Routenberg, who contributed to the colour and variety of the concert. Time passed like a flash when performers and listeners were both having fun, and the encore of Chick Corea’s Windows served as the much-appreciated parting note. 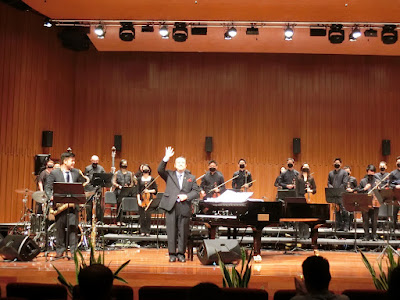