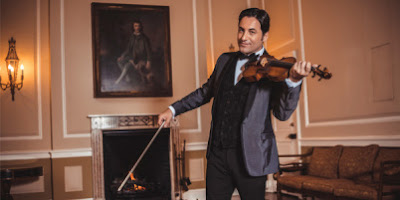 This review was published in Bachtrack on 9 March 2020 with the title "Litton, Quint and the Singapore Symphony provide light at the end of the tunnel".

The Covid-19 virus crisis has hit the world hard, and Singapore is short of going into complete shutdown. The Singapore Symphony Orchestra has, however, bravely continued its subscription concerts, bringing semblance of normality and much-needed cheer to the beleaguered city-state. Healthcare and public transport workers were granted free admission to this concert of 20th century music.

Led by SSO Principal Guest Conductor Andrew Litton, the evening opened with the high energy of Leonard Bernstein’s Overture to Candide, the 1956 operetta based on Voltaire’s satirical novella. Filled with Rossinian wit, champagne bubbles fizzed and sparks flew in its brief duration, bringing a smile to even the most jaded soul. It was simply the best start in the best of all possible worlds.

Smile turned into frown for John Corigliano’s The Red Violin, the four-movement violin concerto crafted from music for the 1997 movie directed by Francois Girard. Tragedy and tribulation follows the three-hundred-year journey of the violin varnished with blood from the luthier’s late wife Anna. Anna’s theme, wistful and melancholic, appears in the opening Chaconne and returns like an apparition in the ensuing three movements. 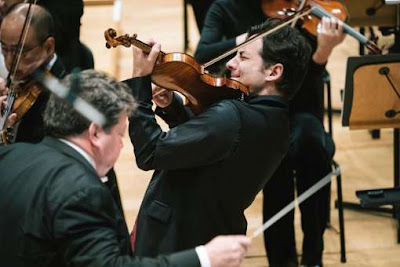 The grim introduction, carried by growling brass and bassoon, was gripping in intensity, heralding Russia-born American violinist Philippe Quint’s entry. The virtuosic solo part, highly characterised and fantasy-driven, found a perfect soulmate in Quint’s artistry. The 17-minute-long Chaconne (often performed as a stand-alone concert piece), while not strictly a baroque chaconne, was just the vehicle of moving pathos. The music was dirge-like in parts and escalated exorably to an explosive finish, representing the cruel hand of Fate and ultimately Death.

Quint revelled in ethereal and otherworldly pianissimo effects of the mercurial Scherzo, while some lyrical respite was provided by warm ensemble strings in the slow third movement. Through all of this, the spectre of Anna’s theme hovered ominously, continuing into the breakneck Accelerando finale. This was a hell-for-leather chase between violin and orchestra to its violently percussive close. Quint’s 1708 “Ruby” Stradivarius had become the living embodiment of the titular red violin in this ultimately depressing work. His encore was something else, a perfectly voiced take on Charlie Chaplin’s most popular melody, Smile from the movie Modern Times.

It was back to darkness with a commanding performance of Dmitri Shostakovich’s Tenth Symphony by the SSO. It was after the death of Stalin when this darkest of Shostakovich’s fifteen symphonies saw light of day. From subterranean rumbles by low strings in the first movement, Litton coaxed from the orchestra one great arch of sound. The mysterious opening was broken by the lone voice of Ma Yue’s clarinet solo. Further solos from flautist Jin Ta, bassoonist Christoph Wichert and oboist Rachel Walker helped define its progression to a mighty climax, culminating with deafening brass and percussion. 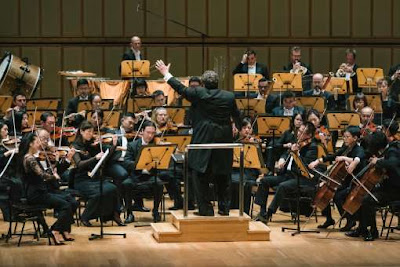 Soon after the movement closed with just two piccolos, the second movement’s juggernaut was unleashed. This was a four-minute-long portrait of Stalinist malevolance and pure evil, its savagery heightened by Jonathan Fox’s snare drum. The third movement’s autobiographical agenda was underlined by the DSCH motif (D, E flat, C, B natural, spelling the composer’s initials in German), later insistently bandied about in a demented waltz. This was countered by another repeated motif (representing a sometime love interest) from Han Chang Chou’s French horn.

The apparent tug-of-war would resolve in the finale, which came like light at the end of a tunnel. This was a roller-coaster of mood and emotion, first reliving the opening movement’s doom and gloom, and later lapsing into actual satire and comedy. The tongue-in-cheek was resolutely defended, with pin-point and precise timing of punch lines, firmly driven by conductor Litton’s mini leaps into the air. The cheer that greeted its close was noisy and tumultuous. Trust Shostakovich (and music itself) to wangle out from a difficult situation some wry smiles.