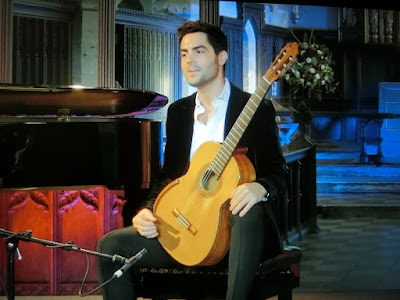 It is amazing to ponder that the Balkan republic of Montenegro, with a population of just over 600 thousand, can boast the talents of pro footballers Mirko Vucinic and Stevan Jovetic, the dear mutual friend of Neil Franks and mine – pianist Boris Kraljevic - and possibly the world’s most popular classical guitarist Milos Karadaglic. He came to Britain as a teenager, studying in the Royal Academy of Music before becoming a recording star and global sensation. His hour-long recital was a world tour of popular guitar repertoire that spanned the entire spectrum of the instrument’s capabilities. 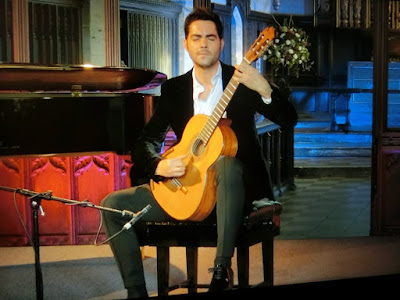 Spanish music came first with a set comprising Granados’ Andaluza (Spanish Dance No.5, also known as a piano piece), Tarrega’s Lagrima (Teardrop, a short piece of quiet reflection and melancholy), Falla’s Dance of the Miller’s Wife (from The Three-Cornered Hat), replete with its vigorous orchestral effects. From the greatest Brazilian composer Heitor Villa-Lobos came his five famous Preludes, written for Andres Segovia, displaying a kaleidoscopic range of colours and moods which Milos keenly lapped up. 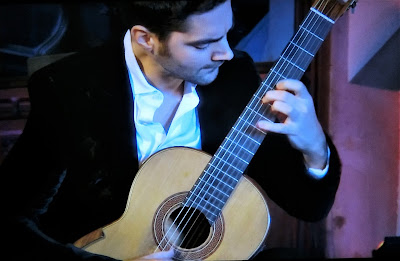 Keen in exploring myriad aspects of guitarism, there were two transcriptions by Japanese contemporary great  Toru Takemitsu of popular songs: Harold Arlen’s  Over The Rainbow (from The Wizard of Oz) and Lennon-McCartney’s Yesterday. The melodies may be unforgettable to say the least but the harmonies employed were unusual, even exotic, resounding beautifully in Milos’ hands. 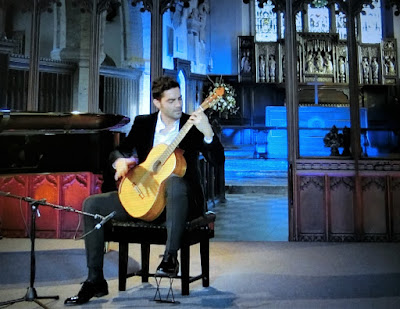 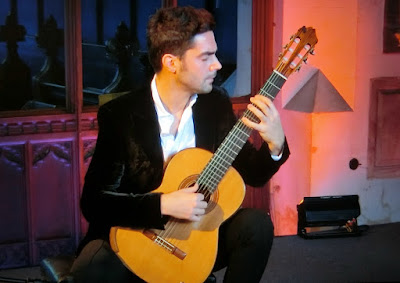 The most substantial work on the programme was perhaps the least familiar (except for guitar aficionados), the Italian guitarist-composer Carlo Domeniconi’s Coyunbaba Suite. The work is unusual as it requires special tuning to relive an Oriental mode in the key of C sharp minor, with its four linked movements influenced by Turkish music. Milos cast a hypnotic spell with this mesmerising music, which traversed from quiet contemplation to white-hot passion and ecstacy. The guitar is an instrument which shares the most private and intimate of thoughts, and rarely has it secrets been so trenchantly revealed. 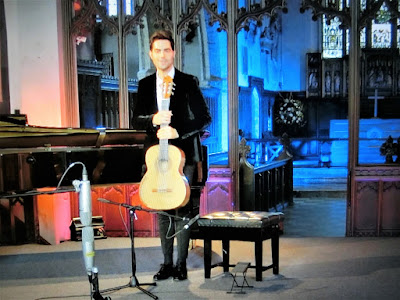 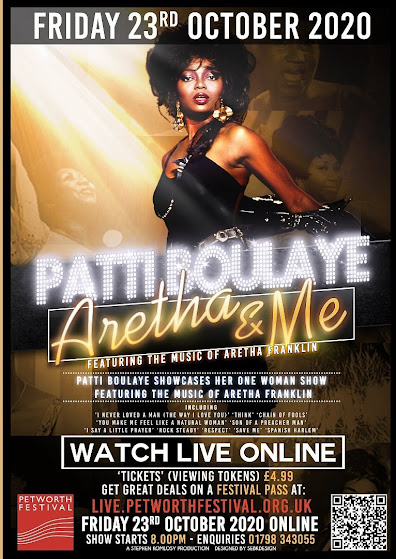 PATTI BOULAYE – ARETHA AND ME

Popular music is so ubiquitous that you recognise the songs even if you did not know what they were called. Such were my impressions when tuning in to British-Nigerian singer Patti Boulaye’s personal tribute to legendary American singer-songwriter Aretha Franklin. Aretha’s songs are so well covered that the originals are sometimes forgotten. Patti’s natural ability and enthusiasm is infectious, which translated well for The Queen of Soul’s standards like Think, I Say A Little Prayer, Spanish Harlem, Son of A Preacher Man, I Never Loved A Man The Way I Love You and Baby I Love You. 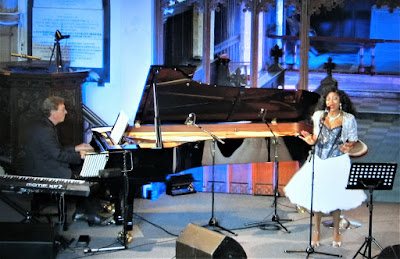 Not everything heard this evening was by Aretha. There was Etta James’ I’d Rather Go Blind and At Last, and Bessie Smith’s Kitchen Man, which are of the similar genre. The less said about the cover of Nessun Dorma (from Puccini’s Turandot), the better. Pavarotti she is not, but at least Patti did it her way. Far more convincing was Dat’s Love or the Habanera from Carmen Jones (Bizet’s opera from the hood), which was more her kind of thing. Best of all was Amina from Patti’s musical Sun Dance which simply oozed the African vibe. Patti was ably accompanied by music director Alan Rogers who manned all the keyboards and extra sound effects. 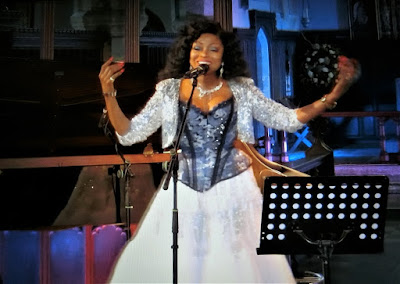 The bewitching hour closed with more Aretha: Chain of Fools, Save Me and You Make Feel Like A Natural Woman, familiar favourites sealing an incredibly lively show for someone who’s mighty proud of being a grandma. Did someone say she is 66 years old? That is simply astonishing. 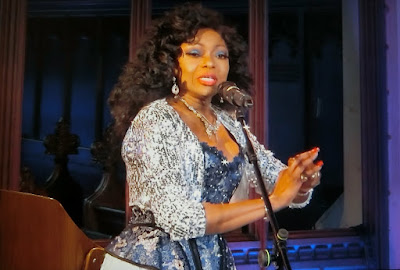 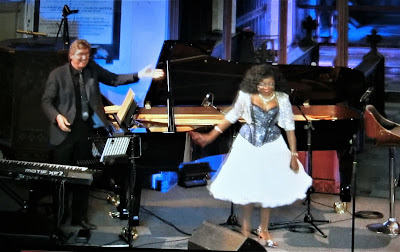 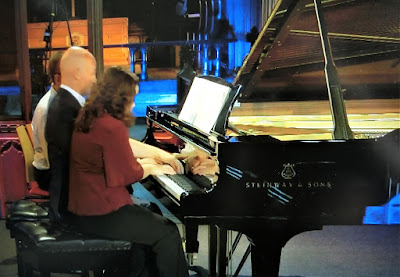 The final concert is this wonderful week at the Petworth Festival was a piano four hands recital by the duo of Charles Owen and Katya Apekisheva. Both pianists are the co-directors of the London Piano Festival at King’s Place, an annual event which I must attend sometime during my lifetime, and I even own a couple of their CD recordings. Their Petworth offering was not Stravinsky’s The Rite of Spring or Rachmaninov’s Suites but a Classical-Romantic affair which made more sense in the space of St Mary’s Church. 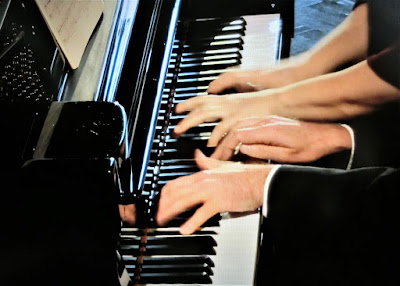 Beethoven’s Sonata in D major (Op.6) is an early work in just two short movements. The vigour and brio stirred in his spirit came immediately to the fore, which made interesting contrasts with Schubert’s Rondo in A major (D.951). This was a late work composed in his final year, one blessed with an unremitting congeniality. As rondos go, this was not the usual jolly dance but a gentle portrait of polite Biedermeier sensibilities. The duo, technically adroit but totally sensitive at every turn, gave a most musical reading which can scarcely be bettered. 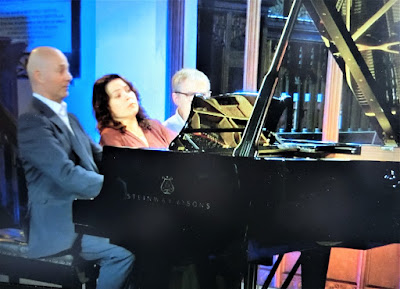 Then came the substantial Brahms set, opening with his Variations on a Theme by Robert Schumann (Op.23, and not Op.9 which is a totally different piece for two hands), based on a late piece written during Schumann’s final throes of insanity. This is the same theme of Schumann’s Geistervariationen (Ghost Variations), but Brahms’ is the far more interesting set, and the duo’s imaginative take sealed the deal. The 16 Waltzes (Op.39) may be considered amateur fodder, but it takes superior musicians to do the myriad subtleties full justice, which was what we got from Charles and Katya.

To close were four popular Hungarian Dances heard in their original form for piano four hands. Brahms was not a striver for authenticity (unlike Bartok and Kodaly) but he fully understood the Magyar gypsy spirit which comes alive in his 21 showpieces. For the record, the duo performed Nos.1, 7, 6 and 5, which are the best-known ones with all the beloved tunes. As they say, all good things must come to an end, but this had been a most enjoyable week of music, and the 2021 Petworth Festival cannot come any sooner! 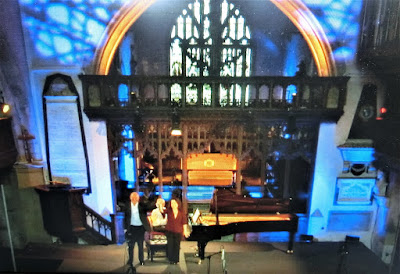