By now, anybody who professes a love for classical music but has not yet heard of the young British cellist Sheku Kanneh-Mason probably lives under a rock or some cave in Afghanistan. Winner of the 2016 BBC Young Musician Award and star performer at the royal wedding of HRH Prince Harry and Meghan Markle, Sheku has six siblings who are also seriously good musicians. How did the seven Kanneh-Masons become Britain’s First Family of Music? Matriarch Kadiatu was on hand at Petworth to share insights into her recently published book House Of Music: Raising The Kanneh-Masons. I can imagine this to be the antithesis of another book, one which will hopefully never be published: House of Horrors: Raising The Kardashians. 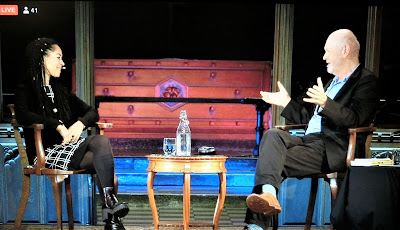 Straight off, my wife and I were touched by Kadiatu’s overall sense of groundedness and authenticity in telling her story. The secret of the Kanneh-Masons’ success was down to a generational legacy good upbringing, good values, good discipline and above all, the closeness and love within a family. It is astonishing to learn that the children were students in normal secondary schools and not hot-housed in petri dish environments of conservatoriums. Sheku, despite his celebrity status, is still a student at the Royal Academy of Music and intends to graduate.

There was also none of the patented hocus pocus of religiosity, praying hard to be gifted heavenly blessings, nor the self-entitled glorification of toil, self-flagellation or self-immolation. There were sacrifices made by Kadiatu and her husband Stuart, for certain, but these were in the contexts of ensuring that love was never in short supply within the family while the kids were growing up. One thing we’ve also learnt: you do not need to be a “Tiger mother” or “Helicopter parent” to produce geniuses. 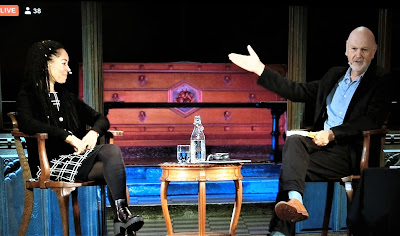 Coming from a multi-cultural background of Sierra Leonese, Welsh and Antiguan ancestry, the Kanneh-Masons would have faced multiple hurdles in making good in the White-European dominated classical music sphere. However their emergence was not the result of  “affirmative action” but rather pure talent given the right opportunities and platforms to take flight and soar. Running alongside them is Britain’s first mixed-ethnic professional orchestra Chineke!, which has also been an inspirational and aspirational journey.

Credit goes to Petworth Festival Director Stewart Collins for posing both pertinent and pointed questions, which Kadiatu replied with a disarming grace and charm. It would seem that this cultured and decorous responses are a million miles away from the anger and aggression of the BLM movement. Watching this interview (and we’ve also ordered the book, arriving within the week!), we are encouraged that there is hope yet in our troubled world of multicultural relations. Thank you, Mrs Kanneh-Mason for helping to make this happen.