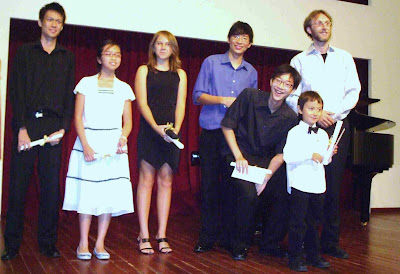 FLUTE FESTIVAL SINGAPORE 2009
Competition Final
Young Musicans’ Society Auditorium
Sunday (14 June 2009)
An edited version of this review was published in The Straits Times on 16 June 2009.
Given the frenetic activities of the Singapore Arts Festival, one could be forgiven for missing out on Singapore’s first ever Flute Festival, organised by former SSO flautist and National Music Competition winner Goh Tiong Eng. The 4-day long event of concerts, masterclasses and demonstrations culminated with the Finals of a flute competition that featured local talents and those as far flung as Korea, Russia and South Africa.

There were six finalists each in both Junior (18 years and below) and Open (above 18) Categories and the standard of performance was uniformly high, comparable with the best at the National Piano and Violin Competitions. Only in such an event will one get to enjoy French organ virtuoso Charles-Marie Widor’s Flute Sonata in its entirety, its four movements shared by 12-year-old Hongkonger Jasmine Ng and 30-year-old South African Scott Douglas Walter.
The former was merely the second youngest performer, trumped by the nonchalant but fearless 6-year-old Korean Nikolai Song (below), who charmed his way into 2nd prize with two delightful pieces on the piccolo, Spanish Dance of Mercedes and Journey to the Sky. His innocence and confidence was simply infectious. The 3rd and 1st prizes were awarded to two Singaporeans, 18-year-old Tay Yun Song and 16-year-old Daniel Lim, with movements from sonatas by Poulenc and Hindemith respectively. The Young Artist Award fell to the graceful 13-year-old Russian Liya Vergazova who impressed in pieces by Kuhlau and Monti. 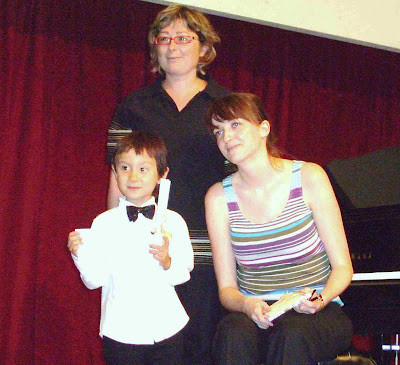 6-year-old Nikolai Song with his accompanist
and jury member Karin Undritz (seated).
The age-gap did little to separate participants in the Open Category, where 20-year-old Singaporean Huang Jia Jia netted the top prize of $2000 with a highly self-assured account of the first two movements from Mozart’s Flute Concerto No.2. His limpid and pearly tone sealed a cultured mastery of the music, which included an impeccably crafted cadenza. 19-year-old Singaporean Jeremy Lim displayed virtuosity and nuance in Theobald Boehm’s showpiece Grand Polonaise, which garnered a well-deserved 2nd prize.

The foreign entrants were led by 3rd place Walter, whose intensely musical performances were matched by those from Jakkrit Maliwan (Thailand) and Leung Yuk Man (Hong Kong); their readings of Prokofiev and Reinecke also remained long in the memory. Witnessed by a small but highly enthusiastic audience, the Flute Festival – which runs again in September next year – surely deserves a higher profile and bigger stage. 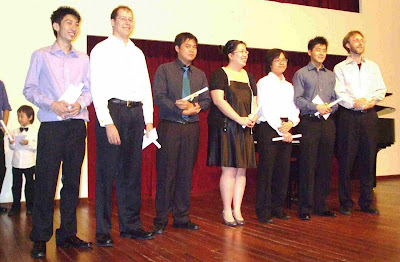 Finalists of the Open Category with jury member Anders Norell.
Posted by Chang Tou Liang at 09:59