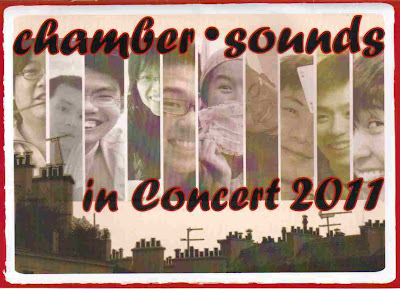 This review was published in The Straits Times on 18 July 2011 with the title "Eclectic, nostalgic, opulent".
The future of Singaporean new music is in good hands, judging by the inaugural concert of Chamber.Sounds, a 10-player ensemble formed by alumni of the Nanyang Academy of Fine Arts. Within an absorbing 90 minutes, seven works by Singaporean and Singapore-based composers were showcased, encompassing a wide range of styles, from conventional to avant-garde.

The opening work was a tribute to Leong Yoon Pin (1931-2011), a performance of his Interfusion for piano quintet (above). The late doyen’s eclecticism was evident, interpolating impressionist and atonal elements, fragments of Oriental melody, before finishing off with a masterclass of counterpoint in a quasi-minimalist dance. Pianist Wong Yun Qi and four string players brought out its essence with great panache.

There were three newly commissioned works on display. Americ Goh’s No.4 for piano quartet was probably inspired by John Cage’s “numbered” pieces, its uncompromising atonality and seeming randomness sounded like a portrait of psychosis. More comforting was Zechariah Goh Toh Chai’s Sing Song for nine players (below), an exercise in 1970s heartlands nostalgia, an ear-catching pastiche of Tamil, Chinese and Malay television matinee music, rounded off with a hip-gyrating joget.

The most opulent sounds came from Eric Watson’s Prospero’s Isle, a heady confluence of piano, string and wind textures that conjured an imaginary journey to exotic locales of beauty and fantasy. His very accessible idiom (read commercially savvy and film-worthy) renders it the most likely work to be repeated.

In between these, younger composers had their moment in the spotlight. Liong Kit Yeng’s Two Movements for viola and piano, inspired by Chinese idioms, juxtaposed a wistful song with an energetic dance. Jeremiah Li’s Violin Sonata was a study in fortissimo and big gestures, its ostinatos bristling with resolute intensity and unbridled violence. Both violist Jeremy Chiew and violinist Wei Ping acquitted themselves well in music of wide contrasts.

Daniel Yiau’s Trio For DAC was unusually scored for clarinet, French horn and double bass. Each movement was a portrait (or caricature) of its dedicatees and performers. Yiau’s self- portrait was of one jokester full of surprises, revelling in jazz and Klezmer. Bassist Clarence Tan’s movement was imbued with introspection and melancholy, while hornist Alan Kartik’s finale exuberantly served up quotes of Richard Strauss, Ravel and Tallis.

Such an enterprise, witnessed by a full house, cannot but succeed in winning new audiences for new music. Long may it thrive.

Perfomers and composers in a post-concert dialogue.
Posted by Chang Tou Liang at 10:51