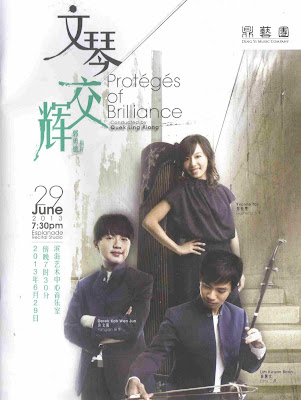 This review was published in The Straits Times on 1 July 2013 with the title "Promising protégés".

The Chinese orchestra is capable of some of the most plangent yet exquisite sounds known to the ear, yet it cannot escape from its roots as a super-sized expansion of chamber music. “Small is beautiful” seems to be the motto of Ding Yi Music Company, which delights in the individual virtuosity of its young members, showcased in this 100-minute long concert. 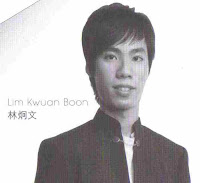 Although three award-winning exponents were highlighted in this programme, it was the combined efforts of its other members that supported the success of the endeavour. The evening opened with just a quartet in Tang Jian Ping’s Emotions, Rain. The melodic line was carried by Lim Kwuan Boon’s erhu (left) and Chua Yew Kok’s pipa, while Derek Koh Wen Jun’s yangqin (right) and Yvonne Tay’s guzheng provided the accompaniment. In pieces like this, when the yangqin breaks out on its own for a showy cadenza, the effect was close to magical. 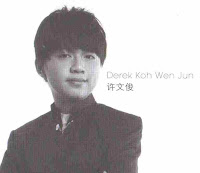 Various combinations of instruments were experimented, such as erhu and yangqin in Lu Ri Rong’s Melody of Mei Hu, and guzheng, xiao (which sounds like an alto flute) and discreet percussion (drums, vibraphone, slung chimes and “temple blocks”) in Wang Jian Min’s Song Of Elegance. Each found their own peculiar sets of timbres, which provided a stimulating aural experience. 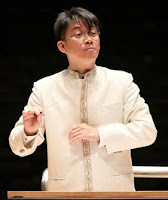 Wang Se’s Falling Flowers. Night was a curious mix of east and west, bringing together yangqin and gangqin (a Steinway grand piano). Both had different ways of sustaining harmonies and resonances, the former with rapidly repeated notes and the latter with chords and generous pedalling. In Sarasate’s familiar Carmen Fantasy, Lim’s erhu replaced the violin, but the sleeker and thinner sound was no less vivid in bringing out the fireworks. 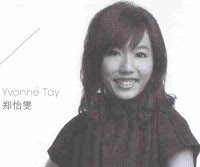 The last three pieces were concertante works, involving the soloists accompanied by a larger general ensemble conducted by Quek Ling Kiong (left). Zhou Yu Guo’s Tunes of Homeland provided  (right) with an athletic workout on her guzheng, which she accomplished with stunning aplomb.

Eric Watson’s River Life and Phang Kok Jun’s Clouds departed from the pentatonic idiom of Chinese music altogether, being 21st century representatives of the medium. Both had the feel of a dreamy symphonic poem. Koh’s yangqin was the thoughtful protagonist in the former which ended on a sublime quiet, while all three soloists were unleashed in the latter, which provided a stirring close to the concert.

All eight pieces were performed continuously and without an intermission, but the time passed almost imperceptibly. One thing is for certain: the future of Chinese instrumental music in is in the best of hands.
Posted by Chang Tou Liang at 08:30