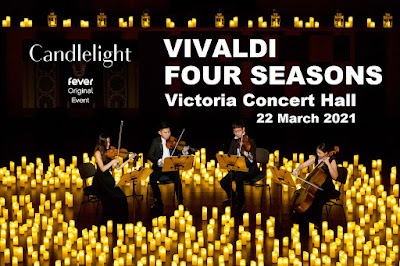 This review was published in The Straits Times on 24 March 2021 with the title "Candlelit concert a gateway to classical music".

After months of unrelenting online advertising, the fever has arrived in Singapore. One is not referring to some variant Covid-19 strain but the much-publicised Candlelight Concerts presented by event organiser Fever that have captured the imagination of some seventy cities around the world. Are these events for real and do they live up to the media hype generated?

This Candlelight Concert featuring Antonio Vivaldi’s Four Seasons began at a later-than-usual hour of 9 pm. That gave the many young people and courting couples attending more than enough time to finish their dinner. And to make their way to a Victoria Concert Hall auditorium illuminated by the fiery glow of hundreds of electronic smokeless candles placed onstage and along the aisles. 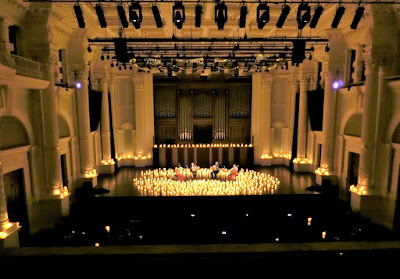 The obvious gimmick and selling point of the concert certainly made for an evocative and romantic setting, but what about the music? For starters, Four Seasons are the four most popular and often-performed violin concertos among the Italian composer’s five hundred or so concertos. Originally scored for a chamber-sized group of strings and harpsichord continuo, what was heard this evening was instead adapted for just four players of a string quartet.

Doing the honours was Vocalise String Quartet, a free-lance quartet that has performed at weddings, corporate events and diplomatic functions. Thus, it was unsurprising that the sonority generated was not particularly voluminous, but adequate to reach the concert hall’s circle seats. A performance of the Seasons would stand or fall on the strength of the violin soloist, and on this evening, first violinist Jocelyn Ng more than delivered the goods.

She exhibited a solid and robust tone, good intonation and was unfazed by the pyrotechnics called for in the concertos’ fast outer movements. Vivaldi, nicknamed The Red Priest, was himself a violin virtuoso who brought a host of innovative mimicking effects into his score. The birdcalls of Spring, pelting rain in Summer, barking dogs on a hunt in Autumn, and the reassuring warmth of a fireplace in Winter, Ng did them all, and some. 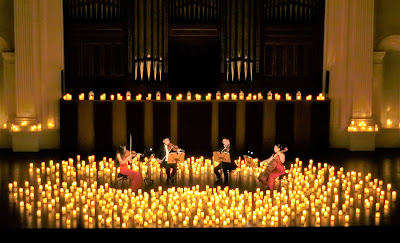 She was well-supported by second violinist Lester Kong, violist Andrew Fung and cellist Peh Xiang Hong, and the enjoyable 45-minutes of Vivaldi passed like a flash. Fillers for the concert’s full hour included the first and most familiar movement of Mozart’s Eine Kleine Nachtmusik, a most apt serenade for the evening and to close, Gerardo Matos Rodriguez’s rocking tango La Cumparsita.

As expected from an audience not regularly acquainted to classical concerts, there was the usual inappropriate applauding between movements and towards the end, a photo-taking spree  (encouraged by the performers) for that perfect Instagram and Facebook post. As an entry point to classical music, first-timers could have done worse, but one hopes they will take the next step by attending concerts by re:Mix, re:Sound and Red Dot Baroque, which do not need candlelight for their music to shine. 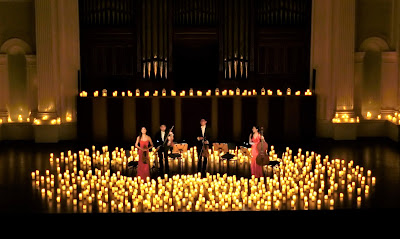