This review was published by The Straits Times on 28 April 2021 with the title "Soulful, nuanced take on Beethoven sonatas".

Last year marked the 250th anniversary of the birth of German composer Ludwig van Beethoven, but planned celebratory concerts in Singapore had to be cancelled or deferred because of the Covid pandemic. It is, however, never too late to indulge in his genius, as this sold-out concert of three sonatas for cello and piano performed by Qin Li-Wei and Albert Tiu amply demonstrated.

Beethoven was the creator of the cello sonata genre, his five sonatas spanning the three periods of his creative output. The duo chose to perform the last three sonatas, encompassing Beethoven’s “middle” and “late” periods. Sonata No.3 in A major (Op.69) is perhaps his best known and most performed, characterised by the wealth of typically memorable melodies. 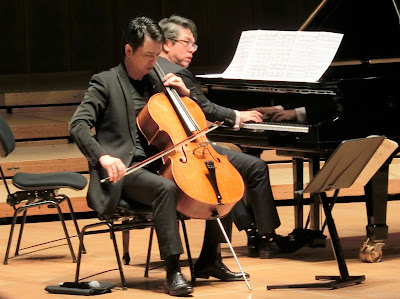 It was Qin who opened unaccompanied, with a first bowed breath – wistful yet confident – that was to set the tone for the evening. Tiu came in at the sixth bar, and one immediately knew this was to be a partnership of firsts among equals. Their intuitive sense of give-and-take was apparent at the outset, becoming more acute in the Scherzo’s syncopated entries, where split-second timing and razor-sharp reflexes became even more critical.

Surging passion was key to the outer movements, with both musicians tapping into vast resources of technique and experience to deliver. Never content of merely vanquishing many notes, there were soul and nuance aplenty, and never a dull moment through the sonata’s half-hour duration. One looks way back to 1992 to remember a reading of similar breadth and authority, by the late great Russian cellist Mstislav Rostropovich no less, with pianist Lambert Orkis at Victoria Concert Hall. 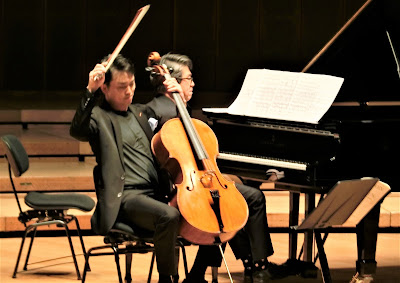 The pair of late sonatas, both shorter works, provided more contrasts and surprises. While Beethoven was a visionary who looked towards the future, there were also nods to past traditions. Sonata No.4 in C major (Op.102 No.1) revealed daring harmonies, trenchantly brought out, that sounded modern for 1815,  while Sonata No.5 in D major (Op.102 No.2) contained the only slow movement to be found in all five sonatas.

Time stood still for its longeurs, all of nine minutes marked Adagio con molto sentimento d’affetto (slowly with much feeling of affection), before closing with a hair-raisingly tricky fugal finale. By now, the duo had performed some 70 minutes without intermission, and seemed raring for more. 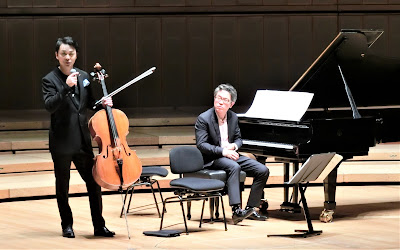 Two delightfully lyrical encores were the result, first with the 18th Variation from Rachmaninov’s Paganini Rhapsody. A clever choice since its melody was an inversion of the opening theme from Beethoven’s final cello sonata, besides being played in the same key. Tom Poster’s expansive arrangement of Harold Arlen’s Over The Rainbow, popularised by Yo-Yo Ma in his latest album, brought on ever more cheers.

Qin Li-Wei and Albert Tiu will perform this programme again at Esplanade Concert Hall on next Monday 3 May 2021. 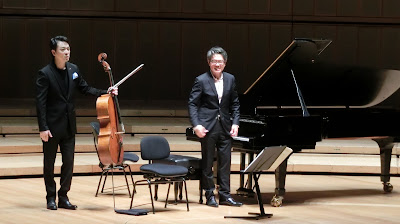 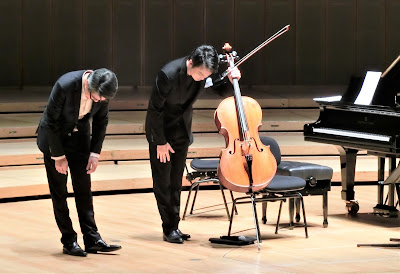 This concert was presented by Altenburg Arts.
Posted by Chang Tou Liang at 10:01