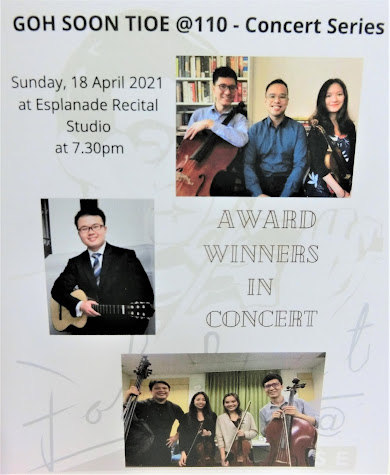 Goh Soon Tioe is 110 years old this year! For those not old enough to remember the name, Goh Soon Tioe (1911-1982) was Singapore’s Western classical music pioneer, one who combined illustrious careers in violin performance, conducting, musical education and impresario work like nobody else had and nobody ever will. In our age of specialisation, his kind will never come again. His legacy lives on in his students, who have included the likes of Choo Hoey, Seow Yit Kin, Lynnette Seah, Lim Soon Lee, Kam Kee Yong and his three daughters (Vivien, Sylvia and Patricia), and the annual Centenary Award bestowed to deserving young string players that bears his name. 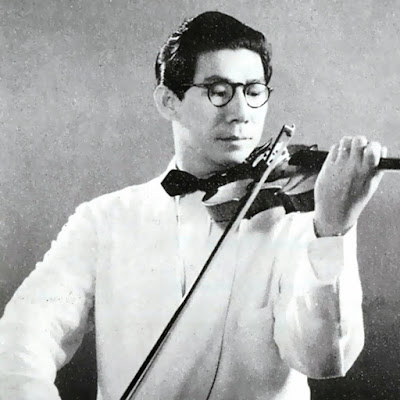 Since 2012, nine deserving young musicians have been awarded monetary grants (administered by the Community Foundation of Singapore) to further their musical studies and careers. Their names read like a young Who’s Who of music in Singapore today. This concert brought together six award winners in an enjoyable chamber concert,  reassuring one and all that the future of classical music in Singapore is in good hands. 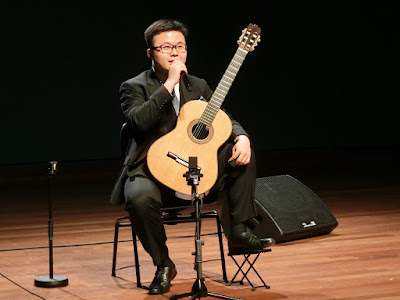 Kevin Loh (2018 winner) is the brightest guitarist to emerge from Singapore in many decades. Presently a Cambridge undergraduate, he helpfully reminded the audience that Goh Soon Tioe himself began his musical career as a guitarist. His studies had been sponsored by no less than Andres Segovia, who also served as mentor and guiding light. Kevin’s varied programme of transcriptions opened with J.S.Bach’s Prelude from Cello Suite No.6, characterised by rhythmic vigour and clarity of articulation. The Latino pieces were also well-contrasted, the vivacity of Albeniz’s popular Sevilla (originally a piano piece) alongside Astor Piazzolla’s slow tango Oblivion, a heart-felt portrayal of melancholy and untold tragedy. 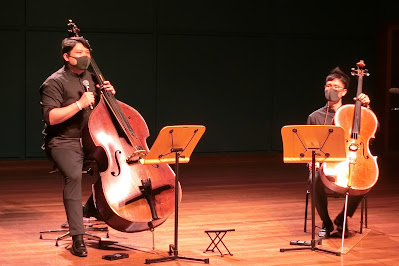 Next came Italian opera composer Rossini’s Duet in D major for double bass and cello, composed for the great Domenico Dragonetti, who was hailed as “Paganini of the bass”. Bassist Julian Li (2013), who has served as principal in China’s Hangzhou Philharmonic and Guiyang Symphony, and Theophilus Tan (2015), cellist of the newly-formed Concordia Quartet, did the honours.

As with works by bass virtuosos, the orchestra’s largest instrument is no longer content with just providing mere accompaniment but having significant melodic lines of its own. Li showed himself to be very nimble in running passages, crowned by a melodic gift with bel canto qualities. The cello  also had melodic moments in the slow Andante molto movement, accompanied by bass pizzicatos, and the duet was completed with an enjoyable romp of the finale. 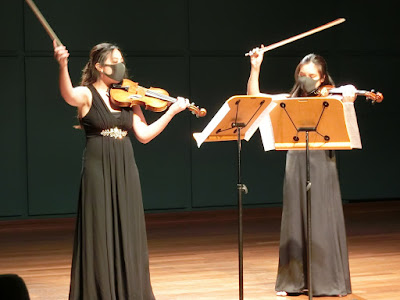 A much more familiar work was the Handel-Halvorsen Passacaglia, usually heard as a showpiece for violin and cello. In this instance, violinist Joey Lau (2017) and violist Joelle Hsu (2019) worked very well together, exhibiting good communication and the requisite “give and take” of chamber music performance while relishing in their virtuosic roles. 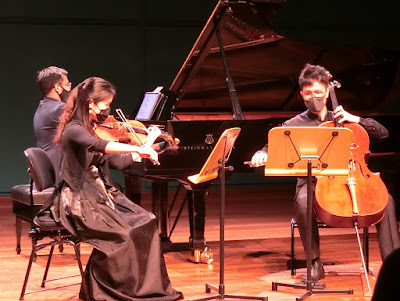 Receiving a rare performance was Rachmaninov’s Trio Elegiaque No.1 in G minor, a teenaged work heavily influenced by Tchaikovsky, with violinist Helena Dawn Yah (2012, the inaugural awardee), cellist Theophilus Tan and guest pianist Jonathan Shin. In a short preamble, Shin explained that the trio’s main theme was in fact an inversion of the opening motif from Tchaikovsky’s First Piano Concerto. The work’s typically Slavic melancholy and dolour was very well brought out, oozing pathos from every pore.

The final work was by Austrian bassist and composer Johannes Matthias Sperger (1750-1812), whose highly congenial Quartet in D major in three movements had one guessing its various influences. Did it sound like Haydn, Mozart, or even the young Schubert? Sperger’s milestone dates indicate that he would have been familiar with the first two composers, while the instrumentation (with the violin replacing the original flute) suggests this was an example of hausmusik (household music) to be played by a group of musical-loving friends over schnapps.

As expected, bassist Julian Li had a lion’s share of melodic interest besides also having the most difficult part of all. He was excellent throughout, and well-supported by violinist Joey Lau, violist Joelle Hsu and a most busy cellist Theophilus Tan. Why don’t we ever get to hear this music with any regularity (instead of countless performances of the Trout Quintet)? At least one can trust and hope that the Goh Soon Tioe laureates, who are now a family of a kind, to revive the hausmusik movement sometime. Such an initiative led by these extremely talented young professionals will be most appreciated.

Vivien Goh, daughter of Goh Soon Tioe
addresses the audience and
thanks the award winners.
Posted by Chang Tou Liang at 16:31

Many thanks, Tou Liang!