Compassion is the series of eight chamber concerts in this year’s Singapore International Festival of Arts, specially curated to reflect on the Covid pandemic and its tragic toll. Over the past year, the nation had gone into partial lockdown, lives and livelihoods were lost, but ways of coping were found and an indomitable spirit prevailed.

Four concerts involving voice and wind instruments had been cancelled, but the remaining recitals still had cogent stories and messages to convey. The Consoler provided an hour of 20th century piano quintet music, forged from the trials of two world wars. 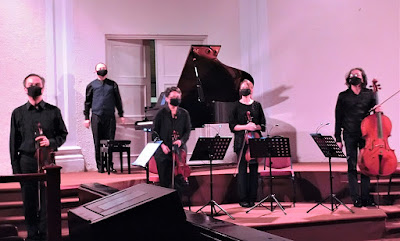 The Russian Dmitri Shostakovich’s Piano Quintet was conceived under a pall of Stalinist totalitarianism, hence its seemingly traditional forms were coloured by a tragicomic personal voice. Frenchman Charles Koechlin’s Piano Quintet composed in the wake of First World War carnage and the Spanish influenza pandemic gave the impression of sunshine breaking through a sea of dense clouds. 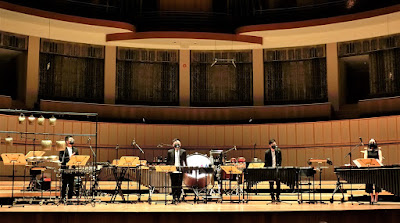 The four young musicians of Morse Percussion - Derek Koh, Joachim Lim, Julia Tan and Cheong Kah Yiong – had a field day in two works by American composers. David T. Little’s Haunt of Last Nightfall memorialised the 1981 massacre of innocents during the El Salvador civil war. Pitched (marimbas and metallophones) and unpitched (drums) percussion with the aid of electronics painted a harrowing scenario which traversed from serenity to violence, climaxing with the simulation of gunshots and machine-gun fire.

By contrast, four movements from Philip Glass’ Aguas De Amazonia (Waters of the Amazon), adapted for percussion from piano pieces, provided soothing balm to the ears. The novel use of slung cow-bells, crotales, wine bottles, water-filled glasses and bowls conjured an ethereal and other-worldly sonority and feel, suggesting that a reconciliation with Mother Nature be the best salve for the world’s ills.

Alone Together saw solos, duos and a trio from the newly formed trio of pianist Li Churen, violinist Yang Shuxiang and cellist Leslie Tan. The music of Poland prominently in various degrees of carthasis works by Penderecki, Wieniawski and Panufnik. Li’s original solo compositions included improvisations on Schumann, Mozart and Chopin and were strong on nostalgia.

The concert’s most poignant moments came in the Intermezzo from Francis Poulenc’s Sonata For Violin and Piano, composed in memory of the poet Federico Garcia Lorca, murdered during the Spanish Civil War. The trio’s encore, Piazzolla’s melancolic slow tango Oblivion, showed that music - in all its infinite variety - had the power to heal.