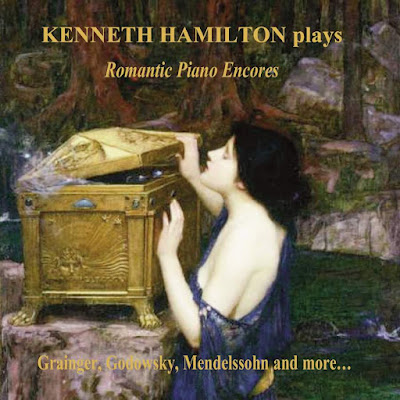 It is no great secret that for many people, the favourite part of a piano recital takes place at the end when the pianist begins to perform encores. Encores are an invaluable part of the concert experience, offering additional insight to a performer’s artistic personality besides being delicious little bonbons to send the audience home happy.

Encores have become so important that the Sydney International Piano Competition now includes a mandatory segment for the performance of encores during its preliminary and final rounds. The choice of encores with respect to recital programmes also determines the competitor’s overall success in the eyes of the jury.

Scottish pianist Kenneth Hamilton’s generous album of encores encompasses both the familiar/popular and obscure/little-played, from miniatures to truly substantial pieces. Many are transcriptions or paraphrases, but there are also several original pieces. Already well-known are the Schumann-Liszt Widmung, Bach-Siloti Prelude in B minor, Tchaikovsky-Rachmaninov Lullaby and Percy Grainger’s Irish Tune from County Derry, all played with eloquence and idiomatic flair.

Several surprises take the form of popular melodies from unexpected sources. J.S.Bach’s flute Siciliano as transcribed by Alkan does not sound all that different from the familiar Kempff. It certainly is not unkempt, pardon the bad pun. Saint-Saëns’ The Swan as reconceived by Lawrence Glover (late Scottish pianist, former teacher of Hamilton’s) is unfussy and straight, shorn of all Godowskyan filigree. It is believed that this is a World Premiere recording.

Among the longer encores, there is a rare airing for Mendelssohn’s Fantasy on The Last Rose of Summer, a virtuosic set of variations on the same Irish melody heard in Friedrich von Flotow’s opera Martha. Also of operatic origin is Grainger’s Ramble on the Love Duet from Richard Strauss’ Der Rosenkavalier, and has there been a more cumbersome title (other than Schulz-Evler’s Arabesques on Johann Strauss II’s On The Beautiful Blue Danube) than this? The Ramble on Love (for short) receives a tender and perfumed reading that deserves many listens.

The two Johann Strauss waltz tributes are also the lengthiest pieces on show. Voices of Spring (Frühlingsstimmen) by Ignaz Friedman is perhaps less well-known as Alfred Grünfeld’s, but is an extended and elaborate affair, more a fantasy than mere transcription. Godowsky’s Symphonic Metamorphosis on Artist’s Life (Künstlerleben), besides being quite a mouthful, is the most complex and gloriously polyphonic of the lot. Hamilton takes two minutes longer than Earl Wild’s famous 1960s recording but he is no slouch. The decadently insouciant music gets the grand treatment it deserves.

This encore album is totally enjoyable, with witty and insightful programme notes penned by Hamilton himself, which can only be added pleasure.