Two years from the start of the Covid-19 pandemic, the musical world has changed. Orchestras have adapted to a new world of smaller ensembles and socially distances performers, reduced audience attendances, but the quality of music has been maintained. Artist and concert cancellations here are something of the past, and a modicum normality has been restored, not least as the Singapore Symphony’s last concert had a Romantic concerto and two symphonies!

When was the last time anybody heard in concert a Romantic piano concerto, or one not by Mozart? That must have been in December 2019 at the National Piano & Violin Competition (when Chopin and Rachmaninov were heard) or in the case of the SSO, further back in September 2019 when Stephen Hough performed Saint-Saëns’ Fifth. Thus a sold-out house greeted Romania-born German pianist Herbert Schuch’s performance of Schumann’s Piano Concerto with the SSO led by Chief Conductor Hans Graf. 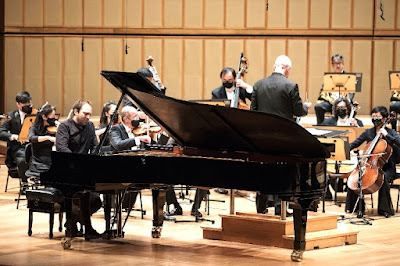 And they were not disappointed, as everything Romantic about Schumann was to be found in Schuch’s assured and expressive reading. The opening flourish of chords was delivered with aplomb, and following that a healthy dose of rubato applied to the main theme. One might quibble that he lavished too much attention on those notes so as to sound precious, but that was more than made up by the sheer sweep of the faster bits. The virtuoso aspect came through for most part in a work considered by many as anti-virtuoso, and especially so in the tricky solo cadenza. 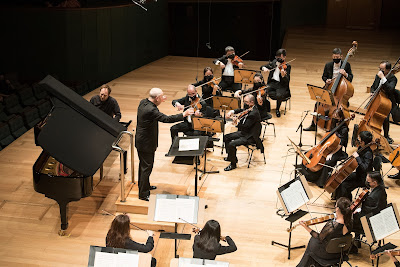 The short Intermezzo that constituted the slow movement saw some delightful repartee between pianist and woodwinds. This was merely an introduction to the finale’s romp which is a series of  heroic turns and vertiginous runs, made more arduous by the quasi-waltz rhythm and orchestral syncopations. A lesser artist might have stalled or lapsed into circular vortex out of which nobody recovers, but Schuch came through with outright bravura and some more. His encore of Schubert’s Impromptu in G flat major (D.899 No.3) was sumptuously laden with more rubato, but after the Schumann, he could easily be forgiven for some indulgences. 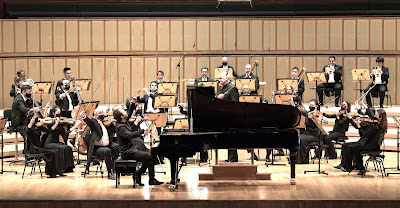 Two Mozart symphonies sandwiched the Schumann filling, the concert opening with the SSO premiere of Symphony No.33 in B flat major (K.319). This appears to be a very smart choice given that the second subject of the first movement will later be recycled, becoming the main theme in the finale of the Jupiter Symphony. How many will catch that musical case of déjà vu hiding in plain sight? At any rate, this four-movement symphony, almost half the length of the Jupiter, received a breezy and enjoyable performance. The lightness of orchestral playing, without the period performance pretentions, impressed not least in the humour of the third movement’s Menuet and Trio (with string portamenti sounding like a donkey being harnessed) and the wit of a mercurial finale. 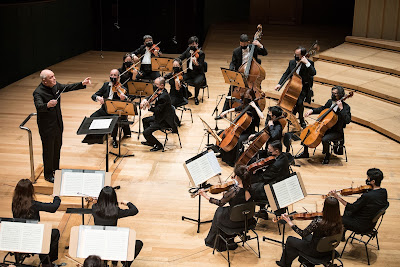 In the same spirit, the opening of the Jupiter, or Symphony No.41 in C major (K.551) as it is formally known, went for the jugular. Graf’s directness of approach – the opposite of being stuffy or stodgy - was refreshing. If there were to be any leisureliness, that came in the slow movement, which was allowed the time to breathe. Despite its courtly feel, an undercurrent of tension prevented it from slagging, the fine balance struck being due to good pacing and judgment. 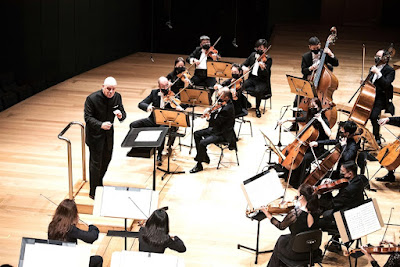 The Menuet and Trio upped the tempo again, and there was to be no shortage of intensity. Then came the mighty finale, and how that theme from the earlier symphony has transformed from being of secondary interest to one of main event stature. Mozart’s masterpiece of contrapuntal writing was enhanced by pin-point playing from the orchestra, and through all that, radiating the unfettered feeling of joy. Encapsulating the spirit of Mozart, Graf and his charges made the Singapore Symphony sound like a Mozart orchestra for the 21st century. Come next week, they will sound like a Beethoven orchestra.

All photographs by Jack Yam, courtesy of Singapore Symphony Orchestra.