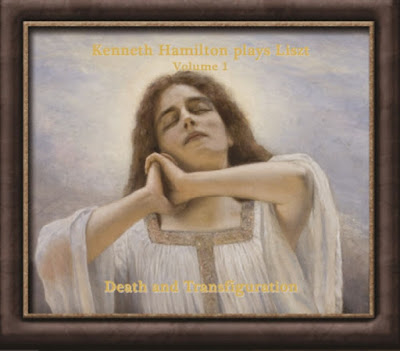 The Covid pandemic has kept many an artist depressed and out of work, but Cardiff-based Scottish pianist Kenneth Hamilton has been busy in the recording studio. Recorded between January 2019 and May 2020, his first anthology of Franz Liszt piano works centres on music composed after his retirement from a glittering and glamourous concert career. With Lisztomania out of the way, he focussed on composing, teaching, philosophising and taking minor orders from the Vatican.

This is music of the mature and wizened Liszt, who plumbed the depths of the spiritual realm and beyond. Given the heightened risks and uncertainties of the pandemic, there is scarcely a soul who will not ponder on life and death, or where we came from and where we go from here. This recital addresses that existential need, a close and personal look at Liszt’s own thirst for spiritual sustenance and regeneration, his response to bereavement and how he found his peace.

Four pieces from his cycle Harmonies poétiques et religieuses (published 1853) are included, with three in the first disc which opens with Funérailles. This is a familiar enough work memorialising deaths in the Hungarian revolution of 1848 (and possibly Chopin a year later), but the bell tolls four times instead of the usual two in its short lead in. Following this is the sublime Bénédiction de Dieu dans la solitude, one of Liszt’s most genuine spiritual utterances, which receives a magisterial reading not short of attention to the filigree and fine details. Pensée de mort (Thought of the Dead) is not well-known, totally underrated despite sharing thematic similarities and form as the Sonata in B minor. It is essentially a tone poem for piano solo that climaxes in De Profundis, clamavi ad te Domine (From the Depths, I Call Out To You, Lord), despairing cry of the recently departed.

A selection of Liszt’s late pieces, casting him as a visionary pointing to the future, have been sprinkled along the way. Raw dissonances distinguish the menacing Csárdás Macabre,  which is in complete contrast with the bleakness and harmonic ambiguity of Nuages Gris. That the latter leads directly to the great Sonata in B minor is a masterstroke of programming not immediately apparent. Both works are harmonically linked by the key of G minor, which shifts like drifting clouds to a home in B minor. The Sonata is the perfect study of thematic transformation, a sprawling single-movement work of pure genius that gets the performance it deserves. At just under 27 and a half minutes, Hamilton’s performance is one of the swifter ones, comparable with those by Martha Argerich and Leslie Howard, but nowhere does he feel rushed. He just does not linger in the slower contemplative sections.

Opening the second disc is the Ballade No.2 (1853), also in B minor, and positively the best reason to hear both discs in quick succession. Thereafter until the last work is a varied collection of short pieces – lyrical and late works – many of which will be unfamiliar to most listeners, with the exception of Schubert’s Impromptu in G flat major in Liszt’s own edition. It is the same music until past the half-way mark when he gilds the melodic line with a treble voice. A most interesting addition it is, complementing the brief Ave Maria (also from the Harmonies cycle), unrelated to the famous Schubert lied, and lovely transcriptions of Liszt’s own songs Die Zelle in Nonnenwerth and  Die Lorelei.

Just as lyrical are the late pieces Abschied (1885, written for his Russian student Alexander Siloti), En rêve (1885, written for August Stradal who transcribed his symphonic poems for piano), Romance (1848) and Romance oubliée (1881). The last two works are based on the same music, the latter being a re-writing of the former, thought to be lost or “forgotten”. But notice how his perspective has changed over the years.

Of the pieces of mourning, Dem andenken Petofis (In Memory of Petofis, published 1877) sounds like a postlude to Funerailles. Prelude to Weinen, Klagen, Sorgen, Zagen (Weeping, Lamentation, Weeping, Despair) of 1859, following the death of son Daniel, was famously recorded by Horowitz just before his death. La Lugubre Gondola I (1886) was written in response to the death of his son-in-law Richard Wagner. There are hardly any sadder or darker works than these in the Liszt catalogue.

Closing the album is Liszt’s popular transcription of Isoldes Liebestod from Wagner’s opera Tristan und Isolde, with the notion of love and death finding its glorious final fruition. A perfectly redemptive end to a journey that began with mortality. Accompanying this odyssey are copious exhaustively well-researched notes by Hamilton himself, where the aid of a magnifying glass becoming paramount. There is not a single vulgar work or superfluous note in these 152 minutes of music. That curious predicament will certainly be fixed in Kenneth Hamilton’s second Liszt album, of transcriptions and arrangements entitled Salon and Stage.